No matter which business performance number you’re looking to improve – productivity, cycle time or profitability – all roads lead through your paint department.

Experienced shop owners and consultants generally agree that the paint shop often offers one of the best avenues to find cost savings and production improvements.

Here is a collection of shop-tested tips and techniques business owners and managers around the country say they’ve used to push more cars through – and squeeze more profit dollars out of – their paint department.

Track it to improve it

As part of the management team at European Collision Center in San Francisco, Dennis Kirkpatrick said the shop has tried many things to improve paint shop productivity, but one of the things offering the biggest impact is a simple “scorecard.”

“The painters write down on a board in the shop the number of hours produced each day,” Kirkpatrick said. “We have a goal of 85 hours per day. That is what triggers the minimum bonus for the paint shop. We previously averaged 62 hours per now. Now the average is 92.”

You can’t change what you don’t measure, he said.

“This makes the entire department aware of where they stand,” he said. “If they have an off day, everyone knows they have to pull harder the next day to make up for it.” 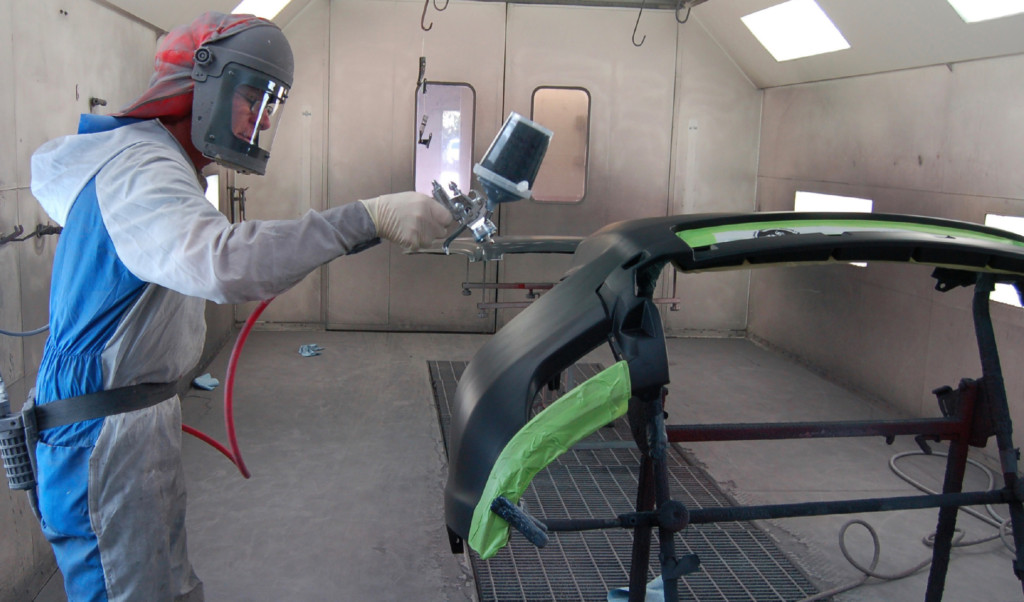 Joe Townsend of Dunshee Body & Frame, Inc., in Kalamazoo, Mich., points to one process changes and two pieces of equipment that have helped improve the company’s paint department numbers.

“We started painting most parts off the vehicle, which reduces masking and other time to prep the vehicles,” Townsend said.

He said the paint line that the company now sprays offers a color match camera and a basecoat that doesn’t require flash time between coats.

“That has drastically reduced our booth cycle time,” Townsend said. “We also added an infrared lamp to help cure smaller repairs so that we can go from body repair to paint in a very short amount of time.”

The right people, the right training

Dave Tritz, owner of Don’s Auto Body in St. Charles, Mo., said that although equipment and materials are key aspects to paint shop performance, it all starts with people.

“You have to have employees who are committed to improving the process,” he said. “If you don’t have that, nothing happens.”

Supplying those employees with ongoing training is among the best investments you can make, Tritz said. He’s sent his painter to training offered by his paint company two of the past three years to learn new products and techniques, and he’s committed to doing that going forward.

“We also hired a painter’s helper who had no experience in autobody, but we put together a plan with the painter to train the new employee based on our company SOPs and the (paint company’s) recommended processes,” Tritz said. “The helper is being tested for knowledge on an ongoing basis, and his wage is determined based on performance. This is creating confidence and a team attitude.”

The shop also brings in vendor representatives for “lunch and learn” training with employees.

“Our staff has learned about many time-saving processes and products, from abrasives and caulks, to dry times and denib and buffing techniques,” he said.

Another paint shop performance improvement the shop has made that cost nothing is better scheduling. Tritz said the key is finding the right mix of large, medium and “fast-lane” jobs, but most critically scheduling work in and out every day of the week.

“Our paint department has consistently performed over 200 percent (efficiency) with this process,” he said. “Before, we’d hit 200 percent but mainly only on ‘good’ weeks or months. Now it is standard at 200 percent plus.”

Start with a thorough repair plan

Tritz also noted that paint shop profitability starts in the office, with complete damage assessments. He said his shop works to meet the rule-of-thumb espoused by trainer and consultant Mike Anderson of Collision Advice, who believes paint labor should account for 20 percent of a shop’s sales.

Not hitting that number in your shop? Anderson said the quarterly “Who Pays for What?” surveys his company conducts show that many shops may be performing “not-included” refinish labor operations for which they aren’t billing.

He points to the refinish labor to match the OEM texture of chip or gravel guard. Of more than 700 shops around the country who earlier this year reported their billing practices related to that procedure, about 43 percent said they are paid by insurers “always” or “most of the time” when it is necessary and included on their estimates or invoices. Yet about an equal percentage of the shops said they had never sought to be paid for this step that is “not-included” in the estimating system refinish labor times.

“If your shop isn’t hitting the 20 percent mark for paint labor sales on most jobs, you’re probably not billing for procedures you’re doing,” Anderson said.

Shops can visit his company’s website (ColllisionAdvice.com) to check the “Who Pays for What?” survey for information on about two dozen commonly-performed “not-included” refinish labor operations.