One for the Team

Trusting his employees to do the right thing created this shop owner’s winning culture.

Ryan Cropper has a crystal-clear vision of his professional life, even though he sees things a lot differently than most of the industry.

Cropper, owner of Able Body Shop in Anchorage, Alaska, describes his approach in four little words: “Strong Values. Quality Work.” But how he translates this idea into an unorthodox approach to shop management is anything but simple. 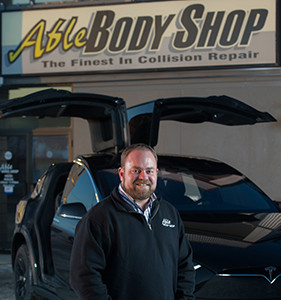 Owner Ryan Cropper has a lot to smile about. He just opened his third shop.

Proof that his system works lies in the fact that since 2002, when he bought an established shop, Ryan has built Anchorage’s premier collision repair company. Having recently opened his third location, Ryan projects that by year’s end, his operation will total more than 27,000 square feet, with 58 techs and staff serving 260 customers a month at an annual billing of $8.5 million.

That’s pretty good for a guy who started out to be a fireman. During the early part of vocational school, Ryan found that “There just wasn’t enough action. I was fairly bored. As a firefighter, you spend a lot of time washing your fire truck, and maybe you go out on a fire a couple of times a year. I started repairing autos to put myself through college, and I found that more gratifying. I could take things that were broken and fix them. It was a real sense of accomplishment. I could see every day the difference I was making. So I ended up finding a shop that was for sale, and the rest is history.”

Ryan cites that sense of accomplishment and his deep-felt commitment to helping people as the shared values with his staff that lets him operate in ways that he believes go against the industry grain.

“I started immediately working on the culture side of the business, which means putting people in the right place and trusting them to do their job the right way,” he says. “A lot of shop owners rule with an iron fist. They spend a lot of time telling people what to do and then putting out fires. I thought there was a better way.” 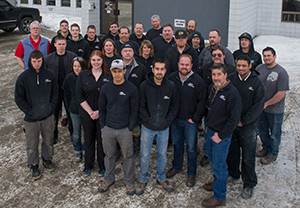 Instead, Ryan takes a “team approach” that is built on trusting his people to do things the right way, and sharing the rewards that stem from their teamwork.

“We work on a team-based concept. We have no flat-rate or hourly technicians. We share everything within the context of the team. I put people in places of strength and then help them do their jobs with a lot of mentoring by myself and other team members. We focus on helping people become who they want to become.”

The team literally works as a team, with no formal management structure: “I don’t have one person who is a ‘manager.’ People know what’s right or wrong, and they know the right thing to do. They don’t need a manager to make those decisions. Everyone is empowered to do what they think is right. I have found that teams have natural-born leaders. They emerge as leaders by a natural process that comes from within the team itself.”

NAME OF SHOP: Able Body Shop
LOCATION(S): Anchorage, Alaska
SQUARE FOOTAGE OF BUSINESS: 27,000
YEARS IN BUSINESS: 15
NUMBER OF EMPLOYEES: 58
NUMBER OF REPAIRS WEEKLY: 65
PROJECTED ANNUAL SALES: $8.5 million
WEBSITE: ablebodyshop.com
WHY CROPPER IS A MEMBER OF ASA: “ASA makes a positive difference by helping people improve their skills and knowledge, and by getting the industry moving in the right direction.”

Ryan knows that the key to successfully operating in a flat-management environment is not for everyone. But, he says, “People come in and find out pretty quickly whether they’re suited for our culture. And if not, they leave just about as quickly. Our actual turnover has been very low. I have only lost one body technician, and he left voluntarily. He preferred a more conventional approach.”

Creating the culture that makes it work is/was not always easy, Ryan admits. “It’s been a long road to get where we are now. The key is consistency and patience. It didn’t happen overnight, and there really isn’t a template for it. I had to show them that it works, so I took eight techs to a shop in Arizona that follows a similar system to have them spend time in the bays with those technicians to see how they do things as a team.”

Not one to rest on his laurels, Ryan knows that successful culture-building is a continual process: “It boils down to believing in what you do, recognizing that it’s important to help people whenever you can and having people much smarter than me in my life.”

Operating a shop in Alaska has more than its share of challenges.
If you were driving to Anchorage, Alaska, from Seattle, Wash., you would have to travel 2,354 miles, which would take up to five days and use 109 gallons of gas at a cost of $254.Ryan says that there is a “drastic difference in work flow” between the harsh winter, which averages about $1 million monthly, and an abbreviated summer, which averages about $500,000 monthly because Alaskans prefer to have their vehicles tied up during months when there are up to 10 feet of snow on the roads. Snow usually starts around Halloween and lasts continually through Easter in Alaska.

Ryan has logged about 75,000 air miles in travel for each of the past five years for himself and his team to the continental U.S. for training, professional conferences and
business-related activities.

It often takes up to 6 days to get parts for most of his major repairs because they have to
be shipped from Seattle. The parts travel by boat for four days over 2,046 nautical miles
to reach Anchorage.