New Mexico shop owner believes in the power of education to spark a successful career. 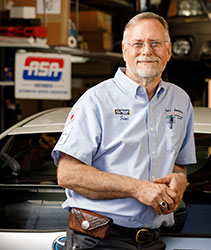 Jim Maddox learned a lesson growing up in rural Los Lunas, N.M., that he has not forgotten: The value of a good education. He uses that lesson every day as a guidepost for his business, Jim’s Automotive in Albuquerque, N.M., and his commitment to his profession.

“There were hay farms, stockyards and cattle ranches then, and when the crops had to be harvested or the cattle moved, kids were taken out of school. So academically, education was somewhat limited,” Jim says. “We learned to fix things like lawn mowers, tractors, etc. because you needed them to work. From an early age, I always liked working with my hands, and high school auto shop was the only class that kept me excited.”

Auto-related, after-school jobs, including working the graveyard shift at a local truck stop, led to enrollment in the Denver Automotive and Diesel College in Denver. “But after two years, I couldn’t wait to get home to New Mexico,” Jim says.

He opened his own shop in 1976 and, in 1981, moved to Albuquerque, where he purchased and remodeled a gas station in 1986 that had been in Albuquerque’s now-upscale Nob Hill district since the 1950s. “Back then, it wasn’t like it is now. It was a rough area of town, and I sometimes had to take extra security precautions if I was there late at night,” Jim explains. 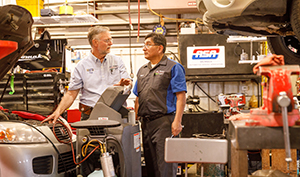 Since then, he has grown his shop into a state-of-the-art, technologically savvy business that is widely recognized as one of the state’s leaders. His 6,000-square-foot shop has 10 employees who service more than 400 vehicles monthly for an annual sales volume of about $1.2 million.

True to his belief in continuing education, Jim offers financial incentives to techs for ASE certifications and who translate those credentials into proven results because, Jim says, “The process tests your knowledge, but it doesn’t necessarily test your ability. They have to be able to turn their knowledge into skills that serve customers better.”

As a result of Jim’s emphasis on certification, he and his techs total more than 130 years of experience in European and Japanese auto repairs.

Perhaps that’s because Jim leads by example. He was named the 2017 NAPA ASE Tech of the Year and 2017 NAPA ASE Technician of the Year for New Mexico (an honor he has held for each of the past six years), which are the latest in a long line of honors, including ASE master auto technician and AC/DC certified master hybrid technician. In addition, his shop has been one of the few ASE Blue Seal of Excellence shops in the state, a Bosch Car Service Center, AAA facility and a RepairPal “Top Shop.”

Jim always has been interested in electric vehicles and hybrids. As an AC/DC certified master technician, he is developing a basic electric car maintenance class for New Mexico businesses that use electric vehicles. “With the introduction of hybrid cars and now fuel cells emerging into the mainstream marketplace, I want to position my shop for what the future will bring,” Jim says. 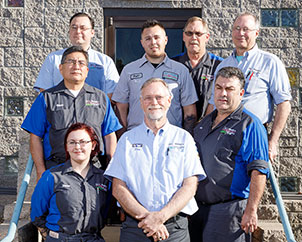 He has opened Albuquerque Hybrids, a one-of-a-kind shop that specializes in repairing and servicing hybrid vehicles. True to form, it’s the only independent shop in New Mexico that is AC/DC Master Hybrid Auto Tech certified. Staying ahead of the curve, Jim and his wife purchased Albuquerque’s first Plug-In Prius, with 75 mpg, and have recently ordered the next generation Prius, which boasts 130 mpg. (For more on the Prius, see page 8).

Jim translates his belief in education to his off-hours activities by working with automotive training programs in two local trade schools. He also offers student shadow programs, internships and special student-oriented, short-term projects that give participants hands-on exposure to the industry’s mechanical side and, Jim hopes, the sense of pride and satisfaction that comes from working with their hands and serving customers will grow from these experiences.

He is counting on that sense of accomplishment to be an attraction for students to join the automotive service profession because “the loss of talent coming from urban schools is the greatest obstacle to the future of our business. Young people are not being trained like us old-timers were. The challenges of my era involved repairing things. Too many parts are being replaced now, i.e. starters, alternators, switches, relays, engines and transmissions. Somehow, we need to reintroduce the importance of repair back into the mainstream of the industry.

“The industry as a whole needs help, and it is going to take a large amount of effort on all fronts to improve the labor force situation,” he explained.

Jim knows that it all starts with a good education.

NAME OF SHOP: Jim’s Automotive Inc.
LOCATION: Albuquerque, N.M.
Square footage of business: 6,000
years in business: 30
NUMBER OF EMPLOYEES: 10
NUMBER OF REPAIRS WEEKLY: 100
PROJECTED ANNUAL SALES: $1.2 million
WEBSITE: jimsautomotive.com
WHY JIM’S AUTOMOTIVE IS A MEMBER OF ASA: “Representation is important to me. The people in Washington, D.C., need to hear from the little guy. They need to know how we feel about legislation and regulations that affect our business. I joined ASA because they had someone in Washington to watch our backs and take our concerns to our elected officials.”