Six foolproof ways to protect you and your customers from mishaps caused by counterfeit parts.

The word “counterfeit” means a copy or replica of something manufactured with the intent to defraud. If, for example, you bought a Rolex from a guy who stepped out of the shadows and had them up to his elbow for 25 bucks apiece, I think you’d all know they weren’t real. Well, most of you would. So if you know that it’s not the real thing, is it by definition a counterfeit? Interesting angle.

Substantial demand exists for counterfeit merchandise, particularly high-priced designer nametags. It seems many women seek to own and be seen with a Coach purse. If the buyer deliberately seeks out sources of knockoffs of the original item, are they the victims of fraud, or are they just getting a great deal? Who is defrauded, and what’s the problem? Does it depend on whether the counterfeited item is a handbag, a cam sensor or a scan tool with pirated software? 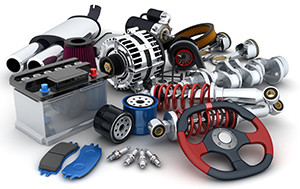 There seems to be consensus that China is the world superpower when it comes to counterfeiting. There are even areas in many Chinese cities dedicated to the marketing of counterfeit goods. It’s so rampant in some places, in fact, that you might make a good bet that even the free Paul Mitchell soap in the hotel might be manufactured by a less well-known source. Wealthy Chinese citizens are reported to travel to the United States specifically to buy genuine items or at least to think that’s what they’re buying.

Some people might claim the Chinese government is behind all this, because it seems little is done to crack down on the practice. The truth might be more that it’s a version of the war on drugs: lots of money and effort spent on controlling the trade but in the end not so much happening to do so.

Figures show that China might be getting a bad rap, though. Recent gains in quality have demonstrated that China wants to be a major global economic manufacturing force. So just because a lot of counterfeits come from China, it’s likely due to the fact that so much genuine merchandise comes from China. Really, the percentage of counterfeit Chinese merchandise is not that high.

1. How do you know? How does all that relate to the issue of counterfeit parts in the automotive parts industry? A manufacturer that produces a car part for an OEM might offer the same part to the aftermarket at a reduced price. After all, if the company makes it, it has to be the same thing, right? Well, maybe it is and maybe it isn’t. And as Jerry Seinfeld famously said to a career-hunting George, “That’s where it gets tricky.”

Just because it comes from the same factory, who’s to say that all of the proprietary ingredients are included and that all the quality labor steps were taken? How can you be certain that the part in question is really the exact same thing and not just part of a batch that didn’t meet quality-control specs and were returned from the OEM? Surely, you don’t believe that all those returned parts end up getting recycled?

2. Use your “spidey sense.” You’ve heard the expression “If a deal sounds too good to be true, it probably is.” There have been cases of extremely costly scan tools that became available using pirated software. The cost was pennies on the dollar, and the tool was brand new. But there are a lot of reasons to avoid getting in on a deal like this, and I’m sure you can think of them on your own. Same with other cheap equipment. The value is in long-term reliability, return on investment and not getting sued or jailed. And the first step in fighting counterfeiting is to not give them your money. If their stuff doesn’t sell, they’ll find another way to make a living.

3. Practice failure analysis. If the part you install doesn’t last, don’t let the company tell you that, “You’re the only one who’s having trouble.” This is a common cover-up. Time to switch vendors.

4. Start asking questions. Rely on your own vendors, and don’t hesitate to inquire further if you have doubts. Doing business with vendors over the long term involves trust that they will provide you with the quality goods you seek. If you constantly purchase only the lowest-cost parts, that’s what some vendors are going to sell to you. And take care when deciding what you ask to buy. The old adage “If you can’t afford to do it right, what causes you to believe you can afford to do it twice?” has never been truer with regard to parts.

A shop owner recently posted photos of two versions of the same part. Different markings on one of the parts made it easy to assume that it wasn’t the exact same product. However, after the manufacturer’s rep saw the photos, he explained that they were the same, genuine parts, but the factory had simply changed some external casting marks. To gain access to people who know the difference and ask questions is easier now than ever before. If you think there’s an issue, seek answers.

5. Educate yourself. Technology is changing our world and our industry faster than ever. You can no longer afford to do the same thing like you’ve always done it just because “We’ve always done it this way.”
Take fluids, for example. A lot of counterfeit fluid is being used in the automotive service industry these days. And though it might be possible to get away with selling some of it for a while, eventually, if you’re doing it, your chickens will come home to roost.
When GM first released its Dexos standard for motor oil, some shops found it tempting to scoff at the increased cost associated with oils that really met the standards and dumped in the same old stuff they’d always used. “Clean oil is good oil” was the statement of the day. Well, after a few engines went south and the shops were held financially liable for their demise, word started getting around. Dexos is a real standard lubricant that engines really need, that and not something that just looks like it.

6. The big scam. Carefully consider fluid labels. If the label says “Designed for use in ____” or “Recommended for ____,” it means it won’t work. That’s right, scam alert. If it says, “Meets and exceeds GM spec XXXX,” and that’s the spec in the manual, then it’s good.

Carmakers don’t provide the engineering specs for their products to fluid makers, except for OE fluids. There are a number of different coolants with extremely conflicting requirements. If you’re not stocking the real things for appropriate fluid service, you’re at risk of causing damage to the vehicle.

There are more than 77 different automatic transmission fluids that aren’t compatible, as well. Either stock what you need to be service ready, reduce the vehicle makes you service or order it in as needed.

It gets worse. The American Petroleum Institute took samples of oil from 1,000 different bulk tanks across the country and found that an alarming 20 percent of those didn’t contain what they were supposed to contain. There are now requirements for paperwork that shows chain of custody for bulk products in some areas.

Educate yourself, do your homework and be on guard. You could be the defrauder or the defraudee, whether you know it or not. One thing is certain: Doing things correctly insures fewer comebacks, less liability and increased production. These mean fewer headaches and higher profits.