Where the Rubber Meets the Road

Ordinarily, he’d head home, where he’d enjoy dinner with his family and an hour or so watching TV. But this evening, he stays put. He’s expecting eight other shop owners to arrive momentarily. And he’ll spend the next several hours meeting with them.

They’ll first enjoy some good-natured banter and dinner. The dinner consists of pizza and fried chicken that Davison has ordered. He picks up the tab because tonight, he’s the meeting’s host. “It set me back $50 or $60, but it’s worth it,” Davison says. “The chicken guy is a friend of mine, and I think he cut me a deal.”
Meeting attendees also enjoy soft drinks, which Davison keeps on hand for customers. They’re told to help themselves.

This is the first get-together of the Des Moines ASA Chapter’s Shop Owner Support (SOS) Group, which is kind of a mini-20 Group, and since Davison has been a member of a 20 Group, he’s in charge of tonight’s meeting. Next month, one of the other shop owners will host, and everyone will meet at his shop.

When they’ve finished eating, the group will tour the host’s shop. Then, they’ll spend the next hour or so critiquing the operation and completing evaluation forms to offer both positive comments and corrective criticism. Most of their efforts will concentrate on shop management. But they’ll also look at the shop’s marketing efforts, its goals and the status of these goals. They’ve come not to ruin Davison’s evening, but to offer advice designed to help his shop perform better.

The nine shops represented (by both men and women) make up this Shop Owner Support Group, which Davison describes as “an ASA-Midwest thing.” He says that as far as he knows, no other ASA affiliates have such a program in place.

Sheri Hamilton, AAM, the executive director of the Midwest affiliate of ASA, suggested the Des Moines chapter form an SOS Group when she was helping it get organized. She asked Davison to start the ball rolling.

“I’ve personally seen the impact an SOS group can make in the personal and professional life of a shop owner,” Hamilton says. “My parents owned an automotive service facility and became very involved in ASA. But it wasn’t until they joined an SOS group that things really began to progress for them.”

Davison says being part of a 20 Group is pretty expensive because members of 20 Groups are scattered throughout the nation, which means there are associated travel expenses and coaching fees to be paid. But an SOS Group’s members are all local shop owners. All live within driving distance of one another. And there are no coaching fees.

“If a shop owner encounters a problem,” Davison says, “chances are someone in the group has faced that same problem. For example, if you’re contemplating adding on to your shop, another member of your SOS Group probably has done that and can give you some really helpful advice.”

A Shop Owner Support Group, in essence, operates the same as a 20 Group, though it’s smaller with a maximum of 10 members. There’s a shop inspection/review process to perform each visit. There also are strict guidelines for following antitrust laws. And just like the big groups, SOS Groups establish goals for which shop owner-members are accountable.

“While you’re at a meeting and filling out an evaluation form,” Davison says, “it’s pounding through your head: ‘Dang! I need to get back to my shop and work on the items on this list before they come visit my shop.’

“You find yourself making notes to get those fire extinguishers in place and marked, get your employee manual up to date and get that coat hook on the wall in the ladies’ rest room so she’ll have a place to hang her purse. You want to be ready for your shop visit when the time comes.”

Davison says being the host is not like sitting in a classroom. You’re well aware they have come to see your operation. “It’s a real motivator,” he says.

Quite often, maybe a month or two after a meeting, group members will run into an issue that they recall hearing a fellow shop owner talking about. So they’ll call or email that shop owner and ask him to refresh their memories on how they handled it.

Among those agreeing with Davison about the networking benefits of an SOS Group is Ron Haugen, AAM, president of the Des Moines Chapter of ASA. “The SOS Group is a great example of shop owners and managers working together to better their shops and our industry,” he says. “Visiting other shops and seeing their operation not only lets you offer suggestions to the owner, it allows you to discover and implement great ideas in your own shop. Let’s face it, help is always good.”

Davison explains that the group doesn’t employ a paid coach, like virtually all of the 20 Groups do. And there are no dues. Instead, the group depends on Sheri Hamilton to “keep us in line.” 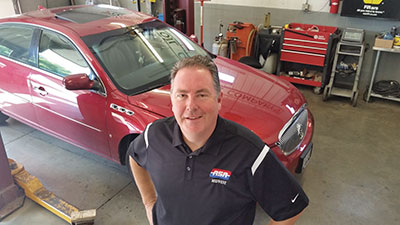 “She does a lot for us, including sending out meeting reminders,” Davison says. “And being part of an SOS Group is a great benefit of being part of ASA and having the opportunity to network with fellow members. It’s truly worth the investment in time and effort because it’ll help you become a better shop owner.”

“The SOS Group members became close confidants to my parents as they made changes and grew their business,” Hamilton says. “This personal experience inspires me to grow both ASA-Midwest and the SOS concept.”

By the fall of 2015, says Hamilton, she expects to have active SOS groups in Des Moines, Iowa; Lawrence, Topeka and Wichita, Kan., as well as in Kansas City and Springfield, Mo.

Tonight’s meeting serves as a preview of future such gatherings. Davison has set up some tables and chairs in the shop and members of the SOS Group eat right there. Good-natured kidding and friendly conversation accompany the meeting. While they’re still eating, Davison starts with a disclaimer. “There can’t be any sharing of dollar details,” he cautions. “Any talk concerning money must be in ‘percents.’”

Then, he asks everyone to introduce themselves with their name, the name of their shop and the city in which they’re located. Next, the host briefly recounts his shop’s history, revealing how it got where it is today.

At 7 p.m., the host passes out a “shop evaluation sheet,” along with some clipboards. Each participant will evaluate the host shop, grading it on points such as shop layout, productivity, shop safety, paperwork flow, rest rooms and customer conveniences and how the staff interacts and works together.

“We allow this to go on until 7:30, and believe me, they have to hustle,” Davison says. “Then we meet back at the tables to ask questions, discuss anything we need to talk about and give some constructive criticism and advice.”

From 8 to 8:30 p.m., the host member’s goals are reviewed. “This is important,” says Davison, “because the host will have to proclaim his or her accomplishments.” Someone in the group might ask, “Why haven’t you gotten this done yet?” Or, “When do you expect it?”

From 8:30 to 9, a topic of interest for the group is discussed. It might concern marketing, employee benefits, major purchase plans, retirement plans or ideas to drive seasonal sales. Such a discussion “can get rather in depth,” Davison says. Tonight, they talk about employee benefits.

Promptly at 9, Davison pauses the dialogue to acknowledge the clock, saying the meeting is over but that those who would like to stay and continue are welcome to do so, and those who need to hit the road can do so.

As a result of the meeting, Davison says, members have gotten to know each other better, learned they all have similar problems and maybe have learned something new that will help them in their business. Members go away saying things like “Wow! That is how you do that,” and “I never thought of doing it that way.”

They also go away benefiting from networking with other members. Travis Troy of Honest Wrenches in Des Moines sees this as a real plus. “For example,” he says, “It’s nice to be able to send out an email to other members of the Group, asking something like, ‘How is XYZ Marketing Company? Have any of you used this firm’s services?’ The other members of the group are always quick to respond, and I value their advice.”

Davison calls an SOS meeting the “moment of truth.”

“An athlete can train all day and think he’s the greatest,” he says, “but the race is where the rubber meets the road and then the athlete will know for sure how good he is. Same thing holds true for a shop owner; he may think he’s the greatest, but there’s nothing like the opinions of eight others to let him know exactly how he stacks up.”

What’s the cost of belonging to an SOS Group? Just a shop owner buying dinner for everyone when he’s the host. Plus, your time, says Davison. You need to participate. But it’s definitely worth the investment, he concludes.

“Believe me, nine heads are better than one.”

What the Group Didn’t Talk About

The guidelines go on to state that such issues include discounts, time, hourly rates charged to insurance companies, individuals, fleet owners, dealers or other shops for repairing vehicles.

“Surveys of prices, discounts and costs are permissible, but only under strict guidelines and only if they are not part of a conspiracy to fix prices or to otherwise restrain trade. Cost studies, which lead to price-fixing or price-stabilizing agreements, violate the antitrust laws.

“Prices charged must be calculated and determined by the business owner alone. These prices should take into account the cost of doing business and include allowances for reasonable profit.”