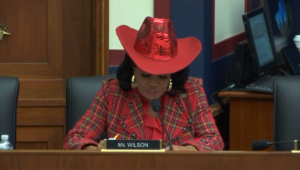 The U.S. House of Representatives Subcommittee on Highways and Transit held a hearing entitled, “The Future of Transportation Network Companies: Challenges and Opportunities.”

(To view the hearing in its entirety, click here.)

“As state and local governments struggle to integrate new modes of transportation into their networks, Congress must take an active role ensuring safety and accountability for the needs of the traveling public,” said U.S. Rep. Eleanor Holmes Norton (D-DC), the subcommittee’s chair, in a news release.

In his opening statement, U.S. Rep. Peter DeFazio (D-OR), chairman of the House Transportation and Infrastructure Committee, said the importance of how transportation network companies, such as Uber and Lyft, are impacting America’s roadways and “what this new business model means for public safety, jobs, emissions, transit services, and other factors, must be at the center of any policy decision to allow these companies to access our infrastructure.”

During the Member Panel, U.S. Rep. Chris Smith (R-NJ) and U.S. Rep. Tom Suozzi (D-NY) both detailed in their opening statements the importance of ensuring that passengers utilizing ride hailing companies are getting into the right vehicle to avoid circumstances of those such as Samantha “Sami” Josephson, who was kidnapped and murdered by a man pretending to be an Uber driver. The bipartisan legislation, H.R. 3262, in honor of Samantha was introduced this past June by Rep. Smith and cosponsored by Rep. Suozzi, was taken up in the subcommittee hearing. The legislation would require enhanced vehicle identification procedures to improve the safety of ride hailing passengers.

Witnesses during Panel 1 all echoed similar sentiments during their opening statements expressing the need for ensuring the safety of passengers using transportation network companies (TNCs) and the need for increased investment in pilot programs, research, and federal grants. Paul Miller, legislative counsel to The Transportation Alliance, emphasized that Congress should be deliberate in policy decisions, but “where we do see Congress having an immediate role is with the federal contracts awarded to for-hire transportation companies. The General Services Administration (GSA) is in the process of putting together a Request for Proposal (RFP), which is looking to outsource some of the Federal governments transportation needs to TNCs.” Miller, along with Chairman DeFazio, expressed concerns regarding the currently lax background check process at Uber and Lyft, and that fingerprint-based background checks should be implemented, especially if they were to be receiving a federal transportation contract.