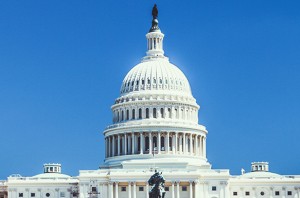 The U.S. House of Representatives Energy and Commerce Subcommittee on Energy held a hearing entitled “Charging Forward: Securing American Manufacturing and Our EV Future.” During the hearing, witnesses discussed the implementation of the recently passed Infrastructure Investment and Jobs Act as it pertains to electric vehicles, United States reliance on oil and gas, and manufacturing goals for an all-electric future.

According to the U.S. Department of Energy (DOE), sales of light-duty, all-electric and hybrid vehicles nearly doubled last year, from more than 300,000 in 2020 to more than 600,000 in 2021. Additionally, international trends show that electric vehicle sales accounted for nearly 9 percent of cars sold in 2021, up from only 2.5 percent in 2019. As demand for electric vehicles continues to grow, it is imperative that the United States has the proper charging station infrastructure installed to accommodate these vehicles.

During the hearing, Cassandra Powers, the Senior Managing Director for the National Association of State Energy Officials (NASEO) testified to the many initiatives that states have implemented to advance the deployment of electric vehicles and electric vehicle charging stations. In her opening statement, Powers stated that:

“States have made tremendous progress toward achieving their energy, economic development, climate, and energy security goals by supporting transportation electrification activities, and in many instances catalyzing private sector investment not only in EV charging infrastructure, but also an expanded and enhanced EV manufacturing and supply chain and grid modernization.”

As electric vehicles continue to be deployed it will be essential to have charging stations not only on interstates, but also in public locations such as libraries, parking structures, schools, and private businesses. Many of the state-led plans for electric vehicle charging implementation champion public-private partnerships.

ASA Chairman Fred Hules commented after the hearing, “It’s important that independent shop owners are aware of policies that impact the U.S. vehicle fleet. ASA is working to ensure that shops stay up to date to reap the maximum benefits from electric vehicle infrastructure programs. As electric vehicles become increasingly more prevalent in the market, it will be essential for shops to invest in infrastructure and EV training.”

The Automotive Service Association (ASA) is the largest, most established nationwide organization committed to protecting our industry with ONE VOICE.

Using our united strengths and influence, we continue to lead the industry through representation, education and member services. Join that ONE VOICE and be a part of what unites us to protect the independent repair and collision professionals across the country. To learn more about ASA and membership, visit asashop.org.