If you want to make it, you can’t fake it. To hire them for your shop, you’ve got to give them what they need to succeed. 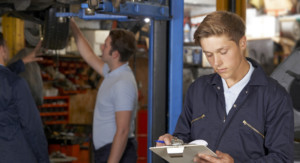 Within the past few years, millennials have been the subject of much conversation in the automotive industry, as well as in society at large. This discussion seems to echo the same theme, that the generation is lazy, unmotivated and wants everything for free. I have always strived to be the exact opposite of this, and hearing it from older generations has never set well with me.

I started working on cars in a local technical and career center at the age of 15. At the age of 16, I was working in a shop after school and nights and weekends with a BMW race team. I graduated from high school a year early, attended college for automotive technology and was a Toyota T-TEN student.

I’ve now been in the field 12 years, working every day to learn and make myself better. I believe there are other millennials out there doing the same sort of thing. You just have to find them. So how did all of us millennials get such a bad rap?

When I graduated from high school, my teachers, counselors and even my principal begged me to join the rest of my friends on “conventional” career paths: engineering school, medical school, law school. I wondered why their career choice was OK, but mine was not. It became apparent that the community took a dim view of skilled trades and the students who chose such careers.

So why are only the kids who seem disengaged or generally unmotivated being sent to skilled-trades programs. Are those kids lazy? Or are they just not interested in what they’re doing in school?

Also, where are all the smart kids we hear so much about in our local newspapers? What happens to them, and where do they go? I can assure you they aren’t the lazy millennials we hear so much about in the automotive industry. I also can assure you that you probably won’t see them much because they’re too busy working to pay off student-loan debt or provide for their families.

And if you want one of those hard-working millennials, you’re going to have to own a professional business, pay what they need to live on and probably have to look outside of your immediate community – possibly even train one yourself.

What Do Millennials Want?

There’s a perception that the automotive industry does not have much to offer the next generation of motivated, hard-working and driven millennials compared to other careers. A lot of my friends who served briefly in this field have been picked up by other industries, including construction, manufacturing and medical companies. Most of them were sought out by those industries and given an employment package they couldn’t refuse.

Those industries are welcoming millennials with open arms. They know what they’re looking for and go out and get it. Automotive repair shops are mostly still putting ads in the paper, or on craigslist. Then, they complain about the quality of prospective employees that come through the door. I’ve tried bringing this to the attention of many shop owners, but I always seem to get the same explanation: “There are just not enough technicians out there because young people don’t want to work with their hands.”

Indeed, millennials have bypassed careers that can’t deliver a good return on their investment. We grew up in a world with Google, with its unlimited research information just a click away. So we use that information as much as possible.

I asked friends who’ve chosen careers in other professions about their experiences when they started their current job. These careers included engineering, science and research, accounting and medical fields. Everyone I interviewed was a millennial, but they didn’t associate themselves with the millennial stereotype. And they had a vested interest in disproving the stereotype.

Most of them also said the generational term had never been used at their place of employment because their employers understand and value the knowledge these people possess. Some of these millennials were sought out by their employers, and others applied for their jobs in a traditional fashion. Also, some of them interned at their companies while in school and then moved into a full-time position after graduating.

So why do those fields value their employees’ education and ours does not? We have this notion that the millennial generation is entitled, and because of this, we want them to prove themselves to us. We don’t accept that college, or post-secondary education, might be a stepping stone and that these young people might still be learning. We want the experience of a 30-year technician, but we want them to be 20 years old.

I often hear, “I can’t pay them that much. They aren’t worth it to me because they don’t know enough.” But consider your technician as an investment that’s making you more money than any piece of equipment you have in the shop. Investing in that asset is just as important as investing in your tools.

You’re paying them, say, $20 an hour and collecting $60 per flat-rate hour. That means you’re tripling your investment for every hour they work. Obviously, there are other factors to consider. But that’s a better ROI than every other tool in the shop. I’m not saying you need to hire at the same price you’re paying your top technicians, but if you want quality, motivated young adults to get interested in the automotive repair field, you need to find a way to pay them a livable wage.

Most colleges are now requiring students to invest around $4,000-$5,000 in tools to start their program (that’s with a 50 percent discount from the tool suppliers). Add to this the fact that some of the automotive schools are getting expensive compared with other tech fields. A quick Google search shows the average annual cost of a Bachelor’s degree in automotive technology is around $30,000 a year, plus the additional expense of tools. This means when the student graduates, he or she could have up to $124,000 in debt with a projected salary of $47,000.

It seems obvious that if you’re going to invest this kind of money, you’re better off doing it for an engineering degree. You’ll be able to pay back your loans in two to three years and continue to make that $100K a year. After attending a schools’ automotive program, it would take you five or six years to pay back the loans while making just $47,000 a year.

And don’t forget, with that $47K a year you’ll still have to spend a couple of grand a year on specialty tools. This is a major reason why we don’t have young adults coming into our field, not because they don’t want to work hard.

The millennial generation has been taught financial responsibility from Day One. According to a study by Charles Schwab, millennials are more responsible with money than previous generations. We took economics classes and investment classes in school. So what does it all mean?

I think it means that smart, driven kids, who the industry says it wants and needs, are just doing what they were taught to do: finding careers that will set them up for success later in life and allow them to start a family and have a home. They aren’t going to take jobs with a flat-rate system that offers no guaranteed income. They don’t want to have to tell their significant other that they can’t eat this week because business was slow at a shop they have no control over.

We need to stop holding that against them and find ways to make our industry as appealing as the other career choices out there. Until we do, our pool of talented technicians will continue to dwindle.