We’ve all been faced with cars that had multiple concerns that seemed interlocked or related. These problems sometimes created one single complaint, or they involved multiple customer concerns.

In our shop we’ve found that if you’re going to have a positive outcome in situations like those, you keep the customer well informed up front about what you’re doing, why you’re doing it and how much it’s going to cost.

We recently had an opportunity to diagnose and repair a police car that had been retired because the trunk release didn’t work and the engine had a misfire that couldn’t be resolved. Our customers bought the car from a government reseller, and when they attempted to take it through Delaware vehicle emissions testing, they discovered the malfunction indicator light (MIL) was inoperative.

The customers dropped the new-to-them 2009 Dodge Charger off and explained that it had failed the Delaware emissions check for no check engine light illumination. In addition, it was running rough and the trunk wouldn’t pop remotely. A closer inspection of the car showed that we indeed had a beat-up Charger with a 5.7 Hemi and only 92,000 miles on the odometer. A glance inside showed that a few interior panels had been removed, and there was part of a wiring harness falling from the passenger side of the dash.

A quick-key cycle verified the MIL did not illuminate at key-on, engine-off, though most other light bulbs checked out as they should. The trunk release button was verified inoperable, and there was noticeable shake to the engine that went away above idle.

It’s not uncommon for us to receive cars with multiple diagnostic concerns that might or might not be related. As a matter of operating procedure, we sell an hour of testing up front for each concern.

Once we complete our testing, we will consolidate testing labor as we deem appropriate, based on how concerns interlink. In this case, we sold three hours of testing up front – an hour for each perceived concern. 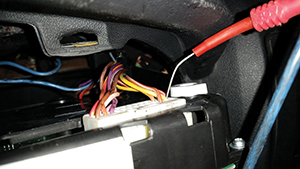 Back probing the cluster carefully to verify power and grounds led us to a 10-volt drop on one of the power circuits.

We started by going after the obvious electrical issue related to the malfunctioning MIL. Our wiTECH quickly indicated the cluster had an active B2213, which is an internal fault-detected code for the cluster. This code is known as the kiss of death on Chrysler modules, but before we replaced it we decided to check power and grounds.

Pin No. 26 for power circuit A917 had a 10-volt drop indicating a significant point of high resistance somewhere in circuit A917. Poor voltage can cause false internal module errors, but it can also cause permanent damage that results in an internal fault code that will not clear. We were about 40 minutes into our testing and could see that we’d needed to do some disassembly to prove where the circuit was faulty. At this point we sold additional time to locate the point of high resistance with the understanding that the cluster might or might not still need to be replaced. 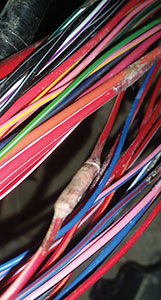 This wire had been damaged at some point, subsequently corrosion started to grow inside the sheathing until it created a high resistance point.

Subsequent testing showed a wire in the trunk near the battery and power distribution center that had been damaged at some point and grown corrosion. The corrosion had overcome about 1.5 inches of the wire, increasing the diameter of the wire sheathing until it was double the size it should have been and ready to burst. We cut out the bad section and installed a temporary jumper wire. The MIL still wouldn’t operate, but now the trunk release function worked correctly. We believe the low voltage caused the cluster to fail internally. We permanently repaired the wire with solder and heat shrink. Once we got the new cluster installed, the MIL worked as it should. Because our testing for the MIL issue resolved the trunk operation, we didn’t charge a separate fee for trunk testing. 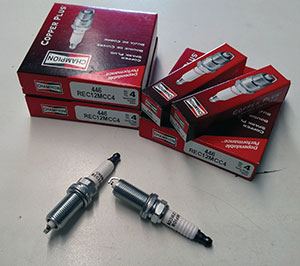 Sixteen resister-type spark plugs are what this engine calls for, but don’t put platinum or other fancy plugs in here as you may end up with undesirable results.

Once we performed our initial check on the cluster, we moved into our misfire diagnosis. Our trusty wiTECH showed A P0300, P0303 and P0306. A quick relative compression test with our Picoscope told us the issue was not going to be mechanical but rather would be found in the ignition or fuel delivery.

A quick scope of the ignition pattern showed us that we had high resistance, likely because the plugs were worn. We removed cylinder No. 3 and No. 6 coils to inspect the spark plugs and found three different types of plugs between the two cylinders. They were different brands, and some were the correct resister types that were worn. Also, some were fancy new iridium plugs that typically don’t work well in these engines.

We stopped there and recommended a tuneup with the correct OEM plugs because we believed further testing would be wasteful. We then advised the customer a second hour of testing might be needed after the tuneup was performed.

After we installed the new plugs and boots, the engine ran smoothly, except during a cold start. We noticed on a cold start that the engine would misfire for 5-15 seconds. 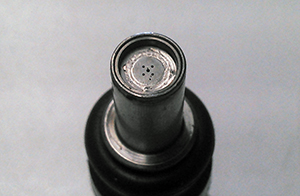 If you look carefully, you’ll see five spray holes at the end of this aftermarket injector.

We removed the fuel rail with the injectors intact (to pressurize the rail) to prove what we thought might be a dripping injector. To our surprise, the No. 6 injector had a different color base that prompted us to look closer. We discovered the nozzle on the off-color injector did not match the other injectors; the initial amount of fuel coming out of the injector at a cold start was different enough in volume to cause this miniscule misfire. Installing a new injector resolved the remaining misfire counts at idle, and the car subsequently aced its emissions testing.

Looking back, we could see that someone tried to fix the misfire but ended up making it worse by installing incorrect spark plugs and the wrong injector. Once the bad parts were installed, their diagnostic process stalled, likely causing them to think the issue was internal engine related. In cases such as this, where there are multiple concerns, we break the problems down as small as possible. It’s always easier to solve small problems than big ones. If you get the little problems resolved, the big ones often evaporate. 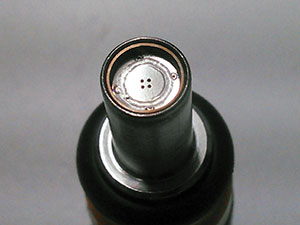 An OEM injector should have four holes. This minor difference was enough to cause a cold-start misfire.

Make sure, when you’re dealing with multiple issues, you clearly communicate to the vehicle owner the multifaceted nature of the issues you will need to resolve. In our case, we sold the spark plugs with the understanding that further testing could be necessary. Because we had clear and concise testing paths, as well as clear results, our customer didn’t blink an eye as we went through the testing and repair process. The result was an easy testing session and a happy customer.