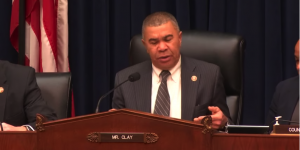 WASHINGTON, D.C. – The U.S. House Committee on Financial Services held a hearing entitled, “Drivers of Discrimination: An Examination of Unfair Premiums, Practices, and Policies in the Auto Insurance Industry.”

The purpose of the hearing was to consider two pieces of legislation that would remove non-driving related factors to be considered by insurance companies when calculating risk for auto insurance costs.

To view the hearing in its entirety, click HERE.

The Preventing Credit Score Discrimination in Auto Insurance Act (HR 1756) prohibits the use of a credit report, a credit score, or other consumer information in determining auto insurance coverage or rates.

The second bill, the FAIR Study Act directs the Federal Insurance Office within the U.S. Department of the Treasury to conduct a study and report annually on the “accessibility to consumers of affordable private passenger automobile insurance coverage and identify disparities between communities in auto insurance costs and payout based on the predominant racial makeup for such communities.”

U.S. Congressman Steve Stivers (R-Ohio) said the U.S. House Committee on Financial Services has introduced a number of bills aimed at restricting factors that insurers consider when calculating insurance policies but have seen roadblocks on both sides of the aisle.

Additionally, in his opening statement, Congressman Stivers acknowledges discrepancy in insurance costs between Ohio and Michigan despite having demographically similar constituencies.

Elizabeth Dwyer, State Superintendent of Insurance in Rhode Island, and Erin Collins, vice president of the National Association of Mutual Insurance Companies, both opposed the legislation viewing it as unnecessary to the current system and negatively effecting the competitiveness and innovation of the insurance market to create new practices.

In their opening statements, Dwyer and Collins both opposed the legislation under consideration by the committee.

Witnesses Douglas Heller and Larkin-Thorne agreed that Congress does have a role here but to also work with regulatory standards in place.

Despite conflicting views, representatives and panelists all agreed maintaining a healthy, competitive market is essential and that discrimination in auto insurance policies is opposed by all.