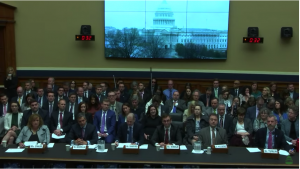 In opening statements, committee members expressed similar sentiments regarding their support and the need for:

To view the hearing in its entirety, click HERE.

Among the groups testifying in front of the subcommittee was the National Federation of the Blind, reiterating that a future with autonomous vehicles will increase opportunities to find work and travel for those with disabilities.

Last year the same committee passed the SELF DRIVE Act of 2019, which passed out of the House Committee on Energy and Commerce unanimously. The legislation died in the Senate after the American Association of Justice (AAJ) voiced concerns over forced arbitration.

In his opening statement, Congressman Greg Walden (R-OR) targeted AAJ inferring that this legislation will require a comprise.

Despite AAJ’s confliction with the bill, all witnesses stated that they believed that autonomous vehicles hold the promise to save lives.

Both Shapiro and Tumlin testified that “we lack a national goal” when it comes to autonomous vehicles and that “with the global race to autonomous vehicles, we have the technology and the fundamental infrastructure here,” but without guidance from Congress, we are allowing other nations to become the leaders.