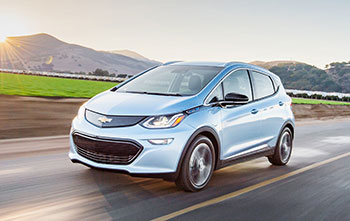 In 2011, I wrote about the Nissan Leaf and compared it to the Chevy Volt. Since then, ACDC bought one of each, so we know them well. But a lot has changed in almost seven years. The cost has dropped on electric vehicles (EV), and the range has more than doubled.

Close to 500,000 plug-in hybrids and pure electric cars have been sold or leased in the United States as hybrid owners want to use less gasoline or none at all. The electric cars are here to stay, for sure.

Normally, I review a new model that was recently redesigned and compare the new one with the old one. I look for changes that make a tech’s life better, or worse, at work. Will poorly thought-out designs that are harder to work on ever go away? Yes. To some degree, they already have because electric cars are easier to service.

The two electric cars I’ve chosen for this article are the new Chevy Bolt (not to be confused with the Volt) and the new Tesla Model 3. They’re about the same price ($37,000 to $38,000 base, before incentives), have well more than 200 miles of range and both allow fast charging. The Bolt is available everywhere, but the Tesla Model 3 just came out as I was writing this article in July 2017.

Right to repair in Massachusetts

In the fall of 2012, Massachusetts passed a referendum making it the only state (still is) where an independent shop can sue the manufacturer of a motor vehicle (gas or electric) if the OEM didn’t level the playing field in terms of service information, replacement parts, tools, equipment, scan tools and training information.

That law has never been tested, but I believe that Tesla would be in violation. If your Tesla fails our annual safety test, you must have Tesla fix it. Most car owners bring their vehicles to a shop they like for the state safety inspection and to fix something that’s wrong. So expect things to change soon as Tesla delivers more Model 3 cars.

ACDC bought a Bolt as soon as the vehicles came out, and we’ve already taught a Bolt EV class at our training center. The ACDC Volt and Leaf were there too, so right away the dialogue in class was difficult because Bolt and Volt sound alike. In this article, I’ll call it a “Bolt,” but in class we now refer to it as a “TLOB.” 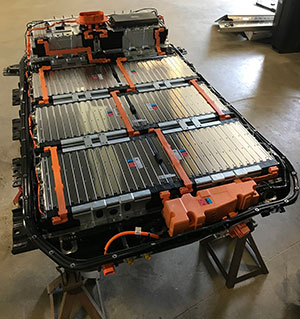 The Bolt is a five-passenger, five-door smallish car with a large 60 KWh Li-Ion battery that you charge from the grid – which means that it’s a pure electric car. When it comes to service, the vehicle has a cabin air filter, brake fluid and liquid cooling system to keep the electronics happy, as well as another liquid cooling system for the battery pack and a liquid cabin heating system. These three separate systems have their own 12-volt pumps and related parts.

If you’ve never taken a regenerative braking class, think of it this way: If a driver wants to stop the car faster than normal, more amps must be forced into the load device (the Li-Ion is the load). If he wants to slow the car more gently, the electronic control unit (ECU) charges the big battery more slowly.

With recuperative braking, the wheel-end components will not do much work, so brake jobs are rare. However, ACDC recommends brake service, depending on where you live – like the Rust Belt. We also recommend a yearly brake inspection and, when required, a brake job without parts. Because the Bolt is a front-wheel-drive vehicle, it stops by using the drive motor most of the time, and front pads will last longer than the rear pads.

The Bolt has a gearbox that consists of direct-drive gears from the electric motor to the differential. The Chevy training materials call this a “transmission,” but I disagree. There is no torque converter and no shifting of gears. Want to back up? The 200hp electric motor will spin backward. And it has no need to shift, as the 91 mph top speed can be easily reached by the electric motor’s spinning rotor to a maximum of 8,810 rpm. Changing the gearbox fluid will be required, but not very often.

Other parts you’ll need to attend to include wiper blades, fluids, tires and alignment. But with no internal combustion engine (ICE), many parts are not needed.

For example, no oil or oil filters, positive crankcase ventilation (PCV) system, fuel filter, timing belt or valve adjustment, spark plugs or air filter. No exhaust system, fuel injectors, carbon to clean out or bad exhaust gas recirculation (EGR) valves. No torque converter, shifting of gears, clutch plate, and no throw-out bearing or transmission. No evaporative emission control system (EVAP), fuel lines, ignition coils or thermostat. No belts, alternator, pulleys and no gas tank. None of these will ever need service or repair again, though I’m sure I missed a few.

Overall, the Bolt is a great car. Everyone who has trained with us and driven the Bolt knows where we’re going. There will be less work, but all you need is more customers, and you’ll still be in business in 30 years.

When Tesla was struggling as a small startup more than 10 years ago, Elon Musk rode to the rescue. Now, everyone knows Tesla as an extremely fast, sexy and expensive car. From the original Tesla Roadster to the Model S P100D, they have proven that electric cars can be everything a BMW or Corvette is.

The new Model 3 is the middle-class’s answer to the Model S. With incentives still available in many states and a federal income tax credit of $7,500, a new Tesla Model 3 costs just $27,000 – with one hitch. The base model will not be available for a year, so only the more expensive Model 3 is available now.

If you have little or no EV training, here is a short course.

Three phase brushless electric motors feed 400 volts at 300 amps is 120 Kw. The 120 Kw converter to horse power is 161 HP. The peak torque is always available, so these cars are fast and fun to drive.

The big brother to the Model 3 is the S. The S is sold in rear drive and all wheel drive (AWD), with various battery packs. The fastest Tesla can go from zero to 60 mph in 2.5 seconds using a combined 792-pound feet of torque when you shift it into Ludicrous Mode. It’s called that for a reason. The Model 3, or T3 from here on, is relatively slow at 5.6 seconds, compared to the Bolt at 6.5 seconds. The little Tesla is an electric sports sedan, and although I haven’t driven one yet, as a rear-wheel-drive car (all-wheel drive version coming later), this should handle well.

Because ACDC is the DBA (doing-business-as) of Van Batenburg’s Garage Inc., we can access Tesla’s service information online. As stated in the beginning, though, we cannot buy parts or a scan tool. While full details of the Model 3 are hard to get, here is what we know.

Tesla has a unique battery-cell arrangement that groups 44 small cells, in a manner similar to an “A” cell, in parallel with a small, single round-wire connection. In the S, there are more than 6,000 cells. This design allows for more current flow, and, if one cell has an internal issue, the small wire acts as a fusible link so that the one cell is no longer connected to the pack. There will be small amount of capacity loss, but the car will still perform as if nothing had happened. It’s an extra safety measure that most EVs don’t have.

Other than the unique battery-cell arrangement, the vehicle also has an induction motor and no dashboard, just a huge touch screen in the center. It’s a rear-drive car, for now, so watch for front pad wear.

The upside of a Tesla or Bolt: No exhaust to breathe and no gasoline-fire hazard; new technology to keep you interested; drivability is less complicated.

The downside: Less work to perform; high-voltage can kill you; and if you’re weak in electronics and basic electricity, you might be replaced by a new tech who’s graduating today.

If you’re 45 or older, you don’t need to worry; there will be plenty of internal combustion engines for a while. But younger techs, and soon-to-be techs, will need a new skill set. And it’s likely that a baby born today who eventually chooses a career in automotive repair will only work on electric cars. In addition to the Bolt, General Motors recently announced that it “believes in an all-electric future” and that it intends to introduce a total of 20 new electric models over the next six years.

Will they enjoy that work more than today’s ICE tech? The future will tell!