Toyota is gaining speed again … is it on the right track?

Toyota has improved its High­lander for 2014 in many ways. It is more spacious, upscale and safer than the model it replaces.

This midsize sports utility vehicle has been a hit since it was first introduced as a 2001 model. Toyota sold more than 127,000 Highlanders in 2013, up 26 percent from the previous year. The last major change was in model year (M/Y) 2008.

The optional AWD system has been changed to improve fuel economy. In the previous model, it always sent power to all four wheels. Now the power goes exclusively to the front wheels in normal driving. The system sends power to the rear wheels only when the front ones start to lose grip or when accelerating through a turn. The driver is able to view the torque-distribution settings on the meter display. The Dynamic Torque Control AWD system continuously monitors and controls the torque transfer between the front and rear wheels via an electromagnetically controlled coupling positioned in the rear differential.

The Dynamic Torque Control AWD system uses information sent from various sensors (speed, steering angle and speed, throttle angle and yaw rate) to automatically govern the transmission of torque to the rear wheels, as required. The AWD system has a “locking mode” for really slippery conditions. It splits power evenly between the front and rear wheels as long as the Highlander stays at low speeds.

Fuel economy for the V6 engine is up by one mile per gallon overall, thanks in part to a new six-speed transmission that replaces the outgoing model’s five-speed. The EPA rates the Highlander’s V6 fuel efficiency at 19 mpg city/25 mpg highway (21 mpg combined) for front-wheel drive, and 18/24/20 for AWD. A four-cylinder engine is offered on the base LE model and a hybrid powertrain is available on the top Limited trim level. The hybrid system is the same as the previous year. The 3.5-liter V6 (the one we are comparing) is equipped with a variable intake manifold and dual variable-valve timing with intelligence (VVT-i), which controls phasing on both the intake and exhaust camshafts to optimize torque and fuel efficiency. The V6 generates 270-horsepower at 6,200 rpm and 248 lbs.-feet of torque at 4,700 rpm. 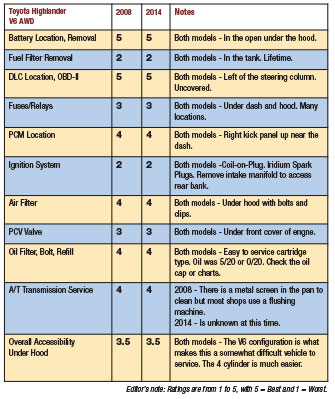 The LE base model is the dependable 2.7-liter four-cylinder engine, equipped with VVT-i, and teamed with a six-speed electronically controlled automatic transmission. It comes with front-wheel drive only; the AWD option is limited to V6 and hybrid versions. EPA fuel efficiency is 20 mpg in the city, 25 mpg on the highway, and 22 mpg combined.

The 2014 Highlander has new technologies: the above-mentioned Dynamic Torque Control AWD, enhancements in suspension, MacPherson strut front suspension, double-wishbone rear suspension and four-wheel disc brakes. The rating of 5,000 lb. towing capacity is up from 3,500. This is like so many SUVs; they just get bigger.

All of the 2014 Toyota Highlanders are holdovers in the ICE department with the six-speed automatic the big change. The body/chassis is all-new. The Hybrid Limited is the same hybrid system as M/Y 2013 and gets 28 city and 28 highway mpg.

In M/Y 2008 big changes took place. The SUV was longer, wider and taller. The four-cylinder was discontinued and a 3.5-liter V6 engine was your only choice unless you bought the hybrid model that used a 3.3-liter engine with power augmented by batteries. Both powerplants deliver 270 hp – the 3.5-liter hooked up to a five-speed automatic transmission, the 3.3-liter driving a continuously variable transmission. Front or all-wheel-drive was available for the gas engine, while the hybrid offers only a 4-wheel drive with the rear wheels driven by a separate electric motor.

Safety was a big part of the Highlander. Seven air bags, including roll-sensing curtain bags that stretch to all three rows of seats, were standard. For extreme evasive maneuvers that could result in a rollover, Toyota offered stability control systems.

Researching Identifix, I found a great tip about “idle speed relearn.” According to the Toyota factory manual, there is no idle speed relearn procedure, but Identifix created one. Look it up if you have any problems with idling. Use “World Standard” automatic transmission fluid or ATF-WS when it is recommended. Refer to the latest Toyota fluid charts. I suggest a transmission fluid change more often than Toyota recommends, especially on the hybrid model. ATF-WS is NOT compatible with T-IV or Dexron ATF. Containers storing Toyota ATF-WS should always be sealed because if they are exposed to the atmosphere, ATF-WS may absorb moisture and potentially cause shift concerns if used. Toyota says, “One time use only.” When performing repairs on ATF-WS-equipped transaxles, it is important to use only new, clean ATF-WS when refilling the transmission.

Toyota is most likely on your list of vehicles to service for a few reasons. They are money-makers, usually easy to fix and the factory scan tool is affordable (approximately $1,400 plus a laptop) and good. Most owners are ready to do the preventive maintenance and will pay for good service.

The new Highlander had not been released when I wrote this article but as a member of the media I had a chance to get to know the 2014. Repairs will be similar to the old model as the driveline has not changed much. Information is easy to access on the Internet and once you gear up for Toyota/Scion/Lexus, you have a lot of vehicles to service. Don’t forget to get ready for hybrids, plug-ins and EVs. Toyota is a leader in that field.