A multipronged diagnostic attack to resolve a rare problem led us to find out if we had a fuel-flow issue or a fuel-pressure issue. 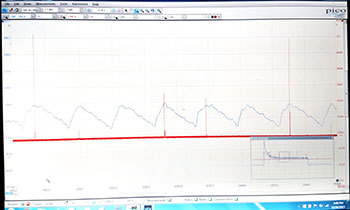 Relative compression is a fast way to ascertain if an engine has a cylinder-specific compression issue. In this case, we found all cylinders were close in relativity.

I often hear folks say they used to be an auto mechanic. It’s pretty common for them to say things like, “I worked on cars back when they were easy to work on.”

I always chuckle at this because the way newer stuff is built makes diagnosis easier than 25 years ago. With the implementation and improvement of the OBD-II standard, it’s getting easier to diagnosis drivability issues and a drivability issue on a modern car can be figured out in an hour of testing. With older cars, there tends to be a more test-everything approach. Admittedly, these almost always cost more than our typical one-hour testing for newer cars.

A normally aspirated ’91 Mitsubishi 3000GT was towed in for a loss of power while driving. This was about a month after the car got a new timing belt. The vehicle’s owner suspected that the problem was related to the timing-belt job and wanted an opinion. The Mitsubishi DOHC, 3.0 liter engine timing belt is somewhat complicated, so a mistake could have been made.

We started our testing by baselining how it ran. It would start, but it idled poorly. The engine was missing and would not accelerate much above idle. A quick check of scan data showed the O2 sensor going lean on the rpms. We opted to perform a relative compression test to get an indication if it was an internal engine fault. Results indicated we either had six good cylinders or six equally bad cylinders.

Scoping primary ignition on a front cylinder showed us that we likely had fouled-out spark plugs. This seemed contrary to what our scan data indicated. But before we started with a fresh set of plugs, we did an in-cylinder pressure capture and got a look at one plug at least. 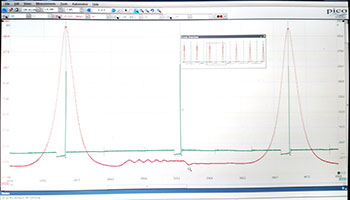 The investigation process will link all the results of the tests together. In this case, we took our good, in-cylinder pattern and, knowing that the engine had relatively the same compression, we could deduce that it didn’t have an internal, mechanical issue. We could focus our efforts on ignition and fuel.

I opted for cylinder No. 5. With the plug removed, we discovered it was dripping wet and definitely not going to fire well. We probably had a fueling issue, but was it rich or lean? We also took a photo of the compression with our Pico scope. We were there and only 20 minutes into the diagnosis at that point.

From the readings, I was able to determine that not only did the engine have acceptable compression but that the valves were opening at the correct time. Also, the spark plug was firing at the appropriate time, so we probably didn’t have an exhaust restriction. The engine was breathing and firing when it should, and there was no way that an improperly installed timing belt could be to blame. Next, we installed a new spark plug into cylinder No. 5 and regrabbed a picture of the ignition primary. I could have moved into fuel system testing, but I knew, based on the condition of the plug that we had pulled from the engine, that it would not run well regardless. I hoped that a fresh No. 5 plug would indicate if our mixture was rich or lean.

Primary ignition on the new plug showed good on the Kv meter – it tried to fire, then fired but burned out early. We were definitely dealing with a fueling issue; we were running out of fuel. With two indicators showing a lean condition, I externally added fuel and the engine would rev to higher rpms. I just needed to find out if we had a fuel-flow issue or a fuel-pressure issue. Access to check fuel pressure and flow is difficult on this engine, so I opted to measure coil current and pump current. The results indicated that the pump was running normally and the injector pintle was opening and closing.

The fuel-filter banjo fitting is the best place to grab fuel pressure, but it required pulling the battery to gain access. Surprisingly, we had good fuel pressure and an acceptable rate of flow from the fuel pump – at least up to the output side of the fuel filter. Fuel pressure would bleed off to varying levels with the pump off (after cranking). 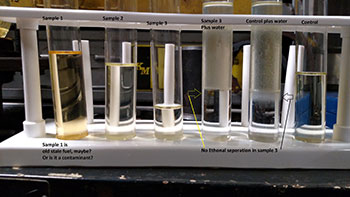 Using a set of laboratory test tubes, we grabbed fuel samples at different stages of pumping out the fuel tank and included two examples of “fresh” gasoline to serve as the control portion of our experiment.

While taking a flow sample, we noticed that the color was not quite right. It smelled like fuel, but looked 10 years old. Mixing with water proved the fuel had no ethanol in it, so it probably was old. After about five gallons of pumping, we started to get clear, clean-looking fuel. It still didn’t emulsify water well, so we pumped the tank dry, added five gallons of new fuel and the car still would not achieve any appreciable rpm over idle.

At that point, I determined there must be a blockage at the injectors themselves. We removed the intake plenum and pulled the fuel rail. We found a sludgy, reddish brown substance blocking all the injector intake ports, each injector to a different degree. We cleaned out the fuel rail, the line down to the fuel filter and replaced the fuel filter and the other five spark plugs, and normal engine operation resumed.

I know now that the engine couldn’t combust completely because the original spark plugs were wet due to the fuel mix being so lean. The injectors were dribbling out fuel, not spraying fuel. Over time, the incomplete combustions snuffed out the plug’s ability to ignite, and it stayed wet.

We never identified the source of the contaminant. The vehicle’s owner played coy when we asked about what he was using for fuel or fuel additives, and he also didn’t seem eager to blame the last gas station where he filled up. My suspicion was that the young driver found five gallons of old gasoline in the family shed and figured, “What could it hurt?” 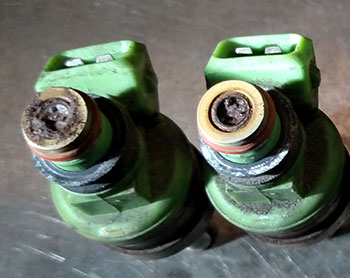 An extreme case of fuel contamination had plugged up the injectors.

The difficulty in these types of jobs is getting paid. With three hours of perceived testing time spent, we did eclipse our expected one-hour time. I say “perceived” because some of the testing time was disassembly time. If we hadn’t pulled the battery to access the fuel filter or pulled the intake to access the fuel rail, our diagnosis could have been completed much faster.

The key is showing the customer testing results, explaining how much additional time is needed and why. Aside from the professional aspect of keeping the customer informed, it makes them feel involved. This creates a sense of value for the money they’re spending.