Still offering ‘old-fashioned service,’ but changing with the times too!

Hoernis Auto Body Inc. – a family-owned and operated collision repair shop in Belleville, Ill. – is celebrating its 50th anniversary this year. What’s ahead for this shop in the next 50 years?

“We plan to continue providing what we call old-fashioned service,” says Steve Hornis, AAM, one of the founder’s sons. “We’ll keep on using the best in technology available in our industry and doing everything at the highest level possible. We’ll also strive to meet the demands and changes in our industry. Meeting those changes means we will be taking a slightly different approach to the way we market ourselves. We’ll have a greater presence online and more aggressive advertising and messaging. But overall, we’ll continue to focus on quality.”

That’s not to say, though, that there hasn’t been a lot of change. The shop has changed with the times. It has had to change to compete.

Steve’s father, the late Jim Hoernis, founded Hoernis Auto Body in 1964 in a building that formerly housed a carriage shop and horse stable. He worked hard and expanded the business. How? By focusing on the latest technology available and personal customer service.

He grew Hoernis Auto Body into one of the largest and most respected collision repair centers in Southern Illinois.

The shop expanded twice from 1972 to 1999 as it serviced not only consumers, but several other body shops in the area. Other shops contracted Hoernis to repair the unibody-designed vehicles that were new in the 1980s, as well as to perform heavy frame repairs and wheel alignments.

Jim and all three of his children – sons Russell and Steve and daughter, Debbie Kruep – worked in the business. So has Jim’s brother, Mike Hoernis, who has worked in production since the early 1970s.

In 2000, they moved to their present location at 207 South 20th Street in Belleville, a city of more than 43,000 people in the metropolitan St. Louis area.

Jim died in 2011, but his children and brother are carrying on the business.

Hoernis is an I-CAR Certified Gold Class shop. It works on almost all makes of vehicles, domestic and foreign. The shop also assists in hassle-free insurance claims through any property damage insurance company.

Steve says that although the shop’s basic philosophy is still the same, it has had to adopt a new approach to marketing to be able to compete. “The way business is done has changed and the way vehicles need to be repaired has also changed,” says Steve. “It started with manufacturers using the uni-body design in their cars in the 1980s.

“Instead of a vehicle’s body being bolted on top of a conventional ladder-type frame, the body and frame were welded together as one ‘uni-body.’ These vehicles were lighter and safer, but more complex to repair.

“Then, by the 1990s, the computer age was in full swing and cars today are more complex than ever.”

It’s tougher than ever today to compete in the marketplace, says Steve.

“We’ve had a large consolidator move into our market that is siphoning accounts away from us,” he points out. “And because of insurance company direct repair referral programs, business is aggressively referred away from us. We still promote that we are a 50-year-old family business that is long on personal service, but we have a new marketing strategy. We’re emphasizing that consumers have a choice in choosing a body shop. Our new marketing message is: ‘Your Vehicle, Your Choice, YOUR Body Shop. Call Us First!’

“I do believe, however, that the idea of direct repair is a good thing for the consumer. Using Internet technology, collision centers can get documentation and repair information to the insurance carriers without using the antiquated adjuster system (where the vehicle and customer have to wait for an adjuster to show up and inspect the damage). We are on several direct repair programs that accomplish this.

“The biggest concern with direct repair programs today is that some of them can lead to pressuring shops to perform faster repairs at a lower cost. This could result in an unsafe repair. Even worse is the fact that shop can become afraid of questioning a direct repair program because they may lose a substantial amount of business if they are removed from the preferred list.”

What makes Hoernis Auto Body stand out? Steve believes it’s because, even though the firm has grown into a fairly large independent collision repair shop, its customers still are served by one of the business owners. “We’re proud of the fact we are still family-owned after 50 years and are doing our best to make sure our friends and customers know they have a choice in choosing a body shop,” says Steve. “We have to, in order to compete and to make sure they choose the best in auto body repair … for their own safety.”

Name of Shop: Hoernis Auto Body Inc.
Location: Belleville, Ill.
Square Footage: 14,000 square feet
Number of Employees: 17
Number of Repairs Weekly: 20
Projected Annual Sales: $2.5 to $3 million
Website Address: www.hoernisautobody.com
Why Hoernis Auto Body Is a Member of ASA: “We joined ASA to become involved in an association that benefits our industry. We benefit from ASA’s mission to support positive legislation in our industry as well as taking advantage of technical and management seminars. Recently, I earned my Accredited Automotive Manager (AAM) designation, made possible through the Automotive Management Institute (AMI), which is partnered with ASA.” – Steve Hoernis

How It All Started

After finding himself unemployed after the auto body repair shop where he worked shut its doors, the late Jim Hoernis decided to open his own business. “I had a wife and three young children to support, and virtually no money,” he once recalled. “I borrowed $2,000 from my father-in-law and opened the shop with $500 in my account.” 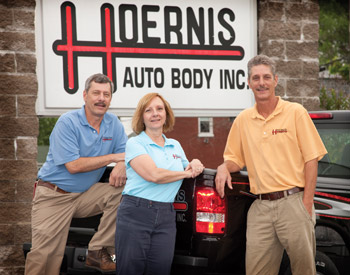 From left are Russell “Russ” Hoernis, Debbie Kruep and Steve Hoernis. Debbie, Russ’s and Steve’s sister, is office manager. Russ, Jim’s oldest son, by the time he was in the eighth grade, was emptying trash cans, sweeping the floors and cleaning up. After finishing high school, he went to Omaha to learn radiator work. Steve also swept the floors when he was young, later served in the U.S. Navy and then earned a bachelor’s degree in business at Southern Illinois University. 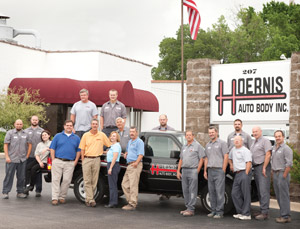