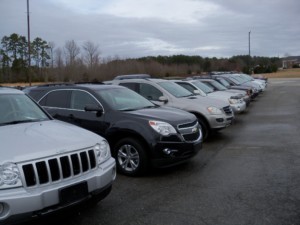 Glenn Hood’s uncles, Clyde and Thorben, started the auto repair business in 1945. The shop sported a single bay and an office consisting of a desk and woodstove. In 1948, they built another bay and added an inspection station.

In 1950, they hired technicians and installed a hydraulic lift, and in 1955 they added a front-end alignment and wash bay.

By 1965, they brought on another brother—Clifford Hood—who was a mechanical technician and Glenn Hood’s father. Shortly after, they built a body shop/truck service bay as well as a detail shop.

Hood began learning the business by painting cars at a young age. From 1977-83, he attended Bob Jones University and graduated with a major in Bible with a minor in radio and television. In addition, he earned a proficiency in Greek and Hebrew language, and a secondary major in art.

He returned from college to the family business in 1983 and added car sales that same year.

In 1988 after his uncle Clyde retired, he bought out his part. After Clyde’s and Thorben’s deaths, the business was left to Clifford and his son. They expanded the facility, added climate/air controlled booths and a paint mixing area. Hood also offered installation of auto sound and security systems. In 2008, he took over his father’s part.

Today, the auto repair business has grown to eight bays, consisting of a full-service shop, a customizing service, and an auto sales business.

Hood Brothers hires 10 full- and part-time employees. Three of those are mechanics. Besides Hood, the office personnel consists of Karen Hood, office manager and secretary with duties of bookkeeping, tax payroll/insurance, inventory management and personnel; Brent, a mechanical technician and salesman; Bryan the website and inventory manager; Tammy Owen, the title clerk and finance/ insurance manager; and Tina Nowlin, secretary and collections.