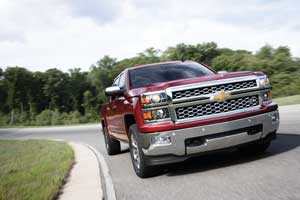 This month I will take a second look at the Silverado. If you have been a reader for a long time you may remember nine years ago I reviewed the 2003 Silverado. We compared it to the 1996 model.

The second-generation Silverado/Sierra was sold from model year (M/Y) 2007 to 2013. It featured a redesigned exterior, interior, frame and suspension as well as power increases on certain engines.

Like the first-generation Silverado (1999 to 2006), there were many configurations: two- door regular cabs, four-door extended cabs and four-door crew cabs. GM also offers the trucks in the traditional two- and four-wheel-drive configurations.

Upgrades such as increased power and active fuel management on the 5.3L and 6.0L V8s were added. A new high-performance 6.2-liter V8 with 403 horsepower and 417 lb.-ft. of torque was introduced in the 2007 GMC Denali line. There were two dash options offered in the new Silverado and Sierra. A luxury-inspired dash and a “pickup” dash that is more upright to make way for a passenger seat in place of a center console.

As far as recalls are concerned, the Silverado went from seven recalls in M/Y 2007 to two recalls in 2011and zero in 2012 and 2013. That is progress. Jeff Gouveia, a technician at Wayside Automotive in Seekonk, Mass., says of these trucks, “They are easy to work on. The 5.3 has been a great engine since about 2007. The plug wires will sometimes break when removing them from the spark plugs but overall this is a good design for GM.” Other things to be aware of is the turbo hydraumatic transmission will need service but is the old pan style with an internal filter.

GM launched a hybrid version of the Silverado/Sierra in Septem­ber of 2004 as a M/Y 2005. Known as a parallel hybrid truck or PHT, it was not actually a parallel hybrid by the current definition, but a stop/start design. The electric motor served only to provide engine cranking/starting, battery charging and powering accessories. The engine automatically shut down as the truck came to a stop and used 36/42-volt electric power to the starter/generator unit to restart the engine as the brake pedal was released. Besides the typical 12-volt battery, the PHT used three additional 12-volt regulated lead acid (VRLA) batteries, in series, mounted under the rear seat to store and provide power. The truck used a 5.3L Vortec 5300 V8 for primary propulsion power. The PHT features four 120-volt 20 amp AC outlets, two in the bed and two inside the cab. The PHT was discontinued after a few years. 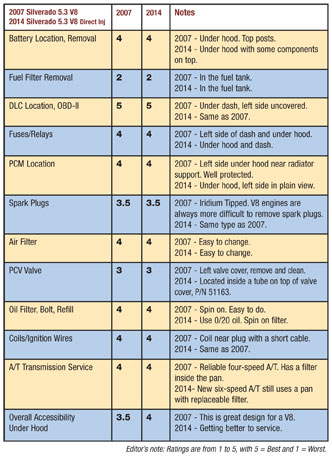 Starting in 2009, General Motors offered a second generation Chevrolet Silverado and GMC Sierra equipped with a two-mode hybrid powertrain and 4-speed CVT. This had a full hybrid system with up to 300 volts. The transmission was a great design and this truck was very advanced, but there were not enough buyers as it was pricey. The hybrid version was discontinued with the latest redesign. There is a rumor that GM is working on a four-mode hybrid, but nothing official.

In M/Y 2014, Chevrolet made some big changes. This was a complete makeover so I visited Diamond Chevrolet, in Auburn, Mass., and spoke to Davern Zbierajewski to help understand this new pickup. It is quieter with a more comfortable interior, improved power and fuel economy and a number of new technology advancements.

Davern brought me into the service bays where I had a chance to talk to the techs. They unanimously agreed that GM is getting better and had nothing but good things to say and this was after Davern left. The Silverado is beloved by many.

A stronger, stiffened frame with a retuned suspension and new electric power steering tells of new CAFE standards. The new Silverado is a more controlled and comfortable ride with more predictable handling than before.

The Silverado is offered with a choice of three new engines, all of which are still pushrod designs with modern technologies like direct injection, variable valve timing and a cylinder deactivation system.

The base powerplant is a 4.3-liter V6 that produces 285 hp and 305 lb.-ft. of torque. That torque figure is tops among naturally aspirated pickup six-cylinders, making the 4.3-liter a good fit for getting better miles per gallon.

A six-speed automatic transmission is standard on all Silverado models. Both rear-wheel-drive and four-wheel-drive configurations are available.

Depending on your trim level, it can be equipped as a vinyl-floored, no-frills work truck, a tech-packed, leather-upholstered luxury machine, or nearly anything between those two extremes.

All Silverado models are equipped with dual front, front side and full-length side curtain airbags in addition to a tire pressure monitoring system and traction and stability control systems.

Several new optional safety features are also available. A lane departure warning system alerts the driver should the Silverado begin to drift into an adjacent lane, and a forward collision alert system provides a warning if it detects an imminent collision with a vehicle or object ahead. Notably, warnings can be conveyed via audible alarms or, more subtly, by a vibrating driver’s seat.

The Ford F-150 will continue to be tough competition for the Silverado (I assume you know the F-150 is going to an aluminum body to save weight). Add two more doors to any pick-up truck and now you have a family truck. America loves their trucks, no doubt about that. And the techs that work on them do, too (for the most part).