Three new technologies that repair professionals can use to detect serious problems before they cause serious breakdowns.

Several of today’s forward-thinking technology companies have run with the idea that the easier it is to keep up with maintenance, repairs and calibrations, the better consumers will treat their cars and the better the shops can take care of consumers. 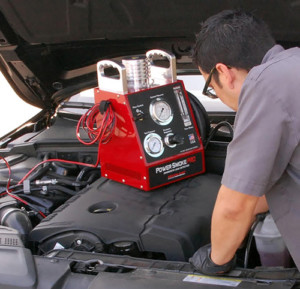 The latest automotive technologies are designed to keep engines clean, gas mileage high and fuel consumption low, as well as to repair cars faster and protect both consumers and the world’s environment. We sat down with a few experts in the automotive technology industry to find out how.

Diagnosing small issues before they grow

Modern turbocharged, diesel and boosted engines are designed specifically to provide power and performance without increasing fuel consumption. But these systems can be thwarted by air leaks or failing components, either of which can go unnoticed until they grow into larger problems.

Maintaining a closed system from air intake to exhaust, for example, is a crucial part of those engines’ functionality, and it’s one issue that can go unseen until it’s already made a major, negative impact. The recent development of a variable pressure diagnostic leak detector can help technicians “see” unmetered air leaks and failing components in high-tech vehicles with precision.

According to Naomi Rivas of Redline Detection, the company behind the PowerSmoke Pro, “This technology saves repair facilities from having to guess which components may be faulty or losing pressure, saving the technician and the consumer substantial time and money.” Rivas also says that this technology allows technicians to diagnose even miniscule leaks in a single, 10-minute test, which wasn’t possible before. 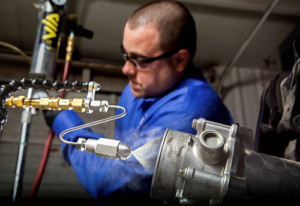 “Any unmetered air leaking into the intake, crankcase or exhaust will cause a variety of drivability issues, causing engine check light faults, robbing vehicles of true fuel economy and causing peak performance losses,” Rivas says. And in the long run, she adds, “An increase in fuel economy, performance and horsepower can all be documented in the field tests using this equipment.”

Essentially, that technology allows a technician to “replicate the boost load of the running engine with the car safely off,” Rivas says, so that when connected to the vehicle, the PowerSmoke Pro creates a closed system, which allows the technician to alter the pressure in the engine and fill it with a visible vapor. The tech can then see a leak or a failing component that needs to be repaired or replaced.

“PowerSmoke Pro delivers six times the visible vapor volume and more than 40 times the pressure of a traditional EVAP smoke machine,” Rivas says, “effectively replicating the entire stress/boost of a running engine with the engine safely off.”

However, in keeping with modern concerns about pollution, “The vapor-producing fluid used in the equipment contains no dyes and is contaminant free, so it’s safe for the vehicle, the technician and the environment,” Rivas says.

Preventing known issues before they cause known failures

One thing all automobiles have in common is that they require energy to run, and the vast majority of them require fuel. The fuel injection process is an imperfect one, but improvements are continually being introduced.

According to Kris Hammon of BG Products Inc., “The Gasoline Direct Injection (GDI) was introduced to improve engine performance and fuel economy.” However, with gasoline direct injection, says Hammon, “The traditional ‘fuel wash’ that was used to clean intake valves” is eliminated. 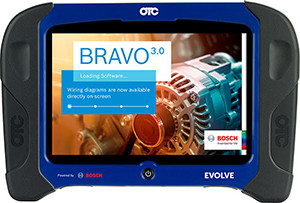 BG has been working on this technology for more than five years. Jay Erwin, research & development manager of tools and equipment at BG, says that the GDI Fuel/Air Induction Service “has been tested on GDI engines to ensure the right equipment is used to disperse the exact volume of chemistry to the specific location needed for the most accurate [length] of time required.”

Boosting accuracy and efficiency of estimates and repairs

The auto industry is currently in a heated debate over whether or not it’s necessary to scan vehicles during the estimation and repair process, and according to a panel discussion at the 2016 NACE | CARS Expo, OEMs are releasing statements stating that post-repair scanning is highly recommended for all vehicles made in the past 20 years, simply because these models are built with computers and can benefit from a scan.

Bosch has taken notice with the recent release of a new kind of scan tool called Evolve. Unlike traditional scan tools that produce a code when plugged into the vehicle, requiring the technician to look up the code and then find the repair information, this new technology has the repair information built into the tool, with OEM updates available over WiFi through a subscription service.

According to Steve Zack, technical training instructor at Bosch Automotive Aftermarket, Evolve’s most technologically advanced features include its diagnostic information section and the fact that the device updates with the most accurate information via WiFi.

When a vehicle is scanned with Evolve, says Zack, “The information is right there, and it updates so the technician doesn’t have to leave the car during the repair.”

Immediate access to current information at the site of the vehicle gives estimators and technicians a faster and more accurate idea of what needs to be done, how much it’ll cost, how much time it’ll take and what role the affected components play in the overall functioning of the vehicle than previous scanners and software.

Scanning a vehicle with a traditional tool brought up a fault code, which then required the tech to look up further information to determine what was wrong and how to repair it. With Evolve, says Zack, “all the built-in repair information is put under an area called Diagnostic Information.

“When you go into Diagnostic Information – which is like a library of information on how to fix the fault code, suggested repairs for a customer complaint or a fault code and a repair track – the section includes videos that I, and other developers, have produced ourselves showing how to repair the vehicle.”

Evolve also includes multiple advance driver assistance systems (ADAS) calibration tools and target boards that ultimately, according to Zack, technicians can use to save themselves time and their customers money.

Automotive technology isn’t just for drivers anymore. The more advanced consumers’ vehicles become, the more they rely on them. Therefore, it’s critical for all automotive service professionals to learn how to maintain, repair and calibrate the vehicles’ computer systems correctly.