That’s how change is heading straight at the automotive repair industry. The upcoming CARS@AAPEX show in Vegas will put you ahead of the pack.

In mid-May a group of 108 of the country’s best technicians gathered in Detroit for the first of two new programs created to give the Congress of Auto Repair and Service (CARS) a stand-alone presence in supporting our members.

That program, called Connected CARS, focused on Advanced Driver Assistance Systems (ADAS). In designing the program, our Mechanical Operations Committee and I knew we wanted to directly connect technicians to automotive engineers who are the current players in design. To accomplish this, we received considerable help from the Automotive Alliance, which represents a large part of vehicle manufacturers. Alliance members General Motors and Volkswagen served as active participants.

We recognized that many of the systems used on vehicles receive their R&D from outside the automakers, so we were also able to engage Tier 1 suppliers such as Bosch/OTC, Delphi and Mahle. To engage this level of engineers, we had to offer the program in Detroit. If you ask any attendee they’ll tell you that this was a must-attend event for the future. So expect a repeat of Detroit next year.

On Day 2 of Connected CARS, I told attendees that if they liked what we did there, CARS this year promises to be even better. So let me share with you our plans for the CARS event that will take place in just a few short weeks.

Late in 2016, ASA was approached about meeting with AAPEX to consider bringing CARS back to Las Vegas. The difference would be that CARS would be integrated into AAPEX to create an overall experience for the service repair shop owner, manager and technician.

AAPEX’s sister show, SEMA, might get lots of press, but for those who take service repair seriously, AAPEX is the most anticipated during industry week. It’s held at the Sands Convention Center across The Strip from the Venetian and Bellagio hotels. Over the last few years, AAPEX management, AASA and the Auto Care Association have stepped up to offer a more robust program.

Making the decision to return to Vegas and partner with AAPEX was not a difficult one for the ASA board of directors and Mechanical Operations Committee. They began listening to ideas for a CARS show that brings networking opportunities together with business information and technical education to create a trade show unparalleled in its offerings.

But the most exciting part of the story is the content. The ASA board blessed me to take charge of this aspect of the CARS programs. I had a lot of fun doing Connected CARS but that pales in comparison to the fun I’ve had preparing CARS@AAPEX and the fifth edition of the Technology and Telematics Forum. 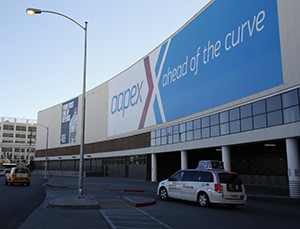 For a detailed look at each of the sessions, see the full agenda online at ASA-CARS.com. However, here I’m just going to focus on key programs.

Starting on Monday, both AAPEX and SEMA will have quite a few enjoyable programs. Our friends at AMi are also involved and will present two sessions on Tuesday and Wednesday featuring Jeremy O’Neal and newcomer Chris Cloutier, who has great content and ideas.

But for those who need to spend a couple of days at work at the beginning of the week, we’ve also planned a complete experience from Wednesday through Saturday. For sure, the eye candy of SEMA is hard to resist. But don’t spend the whole day Wednesday at SEMA at the Las Vegas Convention Center.

Instead, split your time between AAPEX and SEMA on Wednesday, and then take in CARS on Thursday, with the first of our theme of “Take Control of Your Future” and the Technology and Telematics Forum (TTF).

We’re focusing this year on updating you on the latest happenings in connected cars and telematics technologies, but we also will feature cybersecurity expert Dr. Anuja Sonalker, who will teach you how to protect your business.

I had the pleasure of presenting with Dr. Sonalker at an Automotive Training Managers Council (ATMC) meeting earlier this year, and I was amazed at the buzz and engagement she generated.

We’re also bringing back Debby Bezzina, who participated in our TTF program in Detroit this spring. Her interview on autonomous vehicles with Robert L. Redding Jr., ASA’s Washington, D.C., representative, was one of the highest-rated sessions at Connected CARS.

Bezzina works for the Department of Transportation on the Dedicated Short Range Communication team, which I think will change the way people drive and save lives. Redding and Bezzina will be joined by a 5G expert, to provide a fascinating perspective on the technology that will facilitate remote diagnostics and vehicles that can upload gigs of data to the Cloud. And TTF would not be TTF without the tech part. In the past, Toyota has been telling us about its hydrogen fuel cell at TTF 1, and at TTF 3 they brought the Marai to Anaheim and gave attendees rides.

On the show floor Thursday afternoon, we’ll focus on service repair. To make it easier to meet vendors, AAPEX will give presentations called “Let’s Tech” that resemble TED Talks and end with a tour of vendors who support the speaker’s topic. These hit a home run last year, and it appears we will have many new vendors and topics this year. The day will be capped by a special service repair reception and program hosted by Carm Capriotto, of Remarkable Results Radio.

Early Friday, CARS begins with AVI technical training, and, like Connected CARS, the training will be a single track event. Between TTF and CARS, we believe we have isolated the three most pervasive trends that are now affecting independent service repair facilities.

Also that morning, I’m excited to bring CARS’ godfather, Bill Haas, back to Vegas, along with Trish Serratore, president of the National Automotive Technicians Education Foundation (NATEF), to show you how to successfully find, grow and retain your technical team.

The afternoon session was developed in collaboration with Bob Greenwood and an advisory committee of some of the best forward-thinking operators in the country. We call the session, “They are Coming for Your Market Share,” and we’re going to show you all of the evolving business models that are taking direct aim at the 70 percent share you currently own. This is not about working harder; it’s about business intelligence.

I attend events like this several times a year that cost more than $2,000 for a two-day program. With support from AAPEX, The Automotive Alliance and our amazing sponsors you can attend all of those sessions for just $215, as long as you register before Oct. 13, otherwise the cost will be $265.

But reserve your room now. Room blocks are selling out fast! And look for great deals on airfare at least 60 days in advance to get the best fares. And, lastly, reward your staff and bring them with you. Other than the cost of food, this is the most reasonable way to train them and prepare your business to “Take Control of Your Future.” See you in Vegas!