Doing the Right Thing – Paying Off for Mesa Shop

We are continually making improvements so that a customer’s experience is the very best possible.

“We’ve been around 34 years, business is good and it’s getting better,” says Owner Bob Schubert.

“We just try to do the right thing for both customers and employees,” says Bob.

“When I was 20, I quit a job at the post office to take an apprenticeship at a body shop in Champaign, Ill.,” says Bob. “The pay was about a third of what the post office paid, but I enjoyed repairing and painting cars much more than sorting letters.”

A year later, Bob and his wife, Debbie, moved to Phoenix and he continued in collision repair. Five years after that, they opened Impact Auto Body.
“I was a one-man operation in the beginning,” recalls Bob. “Today, we have 14 employees; however, in 2007 there were 32 people. Then we made the decision to downsize, take ourselves off of several direct repair programs (DRPs) and work harder at being efficient rather than just increasing sales volume. I’m really fortunate to work with a great group of people that understands and buys into the concept of working together as a team.”

Bob is quick to praise the shop’s general manager, Tom Butka, for the success of the business. “Tom has been with us 21 years and does a great job running everyday operations. He works with the technicians and the office staff to ensure that Impact consistently turns out an excellent product and customers are much more than just satisfied.” Bob’s brother, Butch, handles repair and maintenance of the building and shop equipment.

Bob says his wife handles sales and marketing. “Debbie is extremely passionate about taking care of customers and also has developed a close relationship with many insurance agents over the years,” says Bob. “Before DRPs became such an influence, she played a huge part in our ability to grow. She developed a beneficial rapport with agents from many different insurers.”

Today, says Bob, his shop works hard at not being overly dependent on insurance direct repair programs. “When these programs first came into existence, the insurers’ primary goal was to provide better service for consumers,” says Bob. “That concept evolved, of course, and shops now are required to handle more and more of the administrative burden of a claim. Many insurers now demand that discounts be given in one form or another. This has become possible, in part, because of insurers’ ability to control where people go to have their vehicle repaired.

“We really push the ‘IT’S YOUR CAR – YOUR CHOICE’ message. We have a large sign that customers see when they walk in our front door that says exactly those words. Even though we still have three DRPs, we want every potential customer to know it is up to them where they have repairs done. Frankly, if we do our job the way it should be done, the customer will insist on coming to us.”

Debbie personally contacts every customer two days after he or she picks up their vehicle. She thanks them and ensures they are happy with both the work and service they received. She also responds to online reviews and works on the shop’s social media marketing. Online reviews are a huge part of the shop’s marketing strategy.

Looking back, Bob says he had no prior business experience before opening Impact Auto Body. He believes “the early years of the business would have been easier and more profitable had there been the opportunity to learn from others first.”

He also believes in ASA and the adage, “in unity there is strength.”

“Two or three years ago,” says Bob, “ASA-Arizona’s executive director, Luz Rubio, learned of a bill that was about to go through committee at the Arizona House of Representatives. The bill, had it passed, would have made it illegal for a collision repair shop to charge vehicle storage to an insurance company if that vehicle totaled. Luz quickly rounded up some shop owners who went down to the state legislature to squash the bill. The shop owners were able to prevent what would have been a huge problem for Arizona collision repair shops.”

What’s in the future for Impact Auto Body? “There was a time when we thought we would become a multi-shop operator, but those days are past,” says Bob. “There are huge growth opportunities where we’re located, so we will just work toward continually improving the business and see what happens.”

Name of Shop: Impact Auto Body
Location: Mesa, Ariz.
Square Footage of Shop: 23,000 square feet
Number of Employees: 14
Number of Repairs Weekly: 15-20
Projected Annual Sales: $2.3 million
Website Address: www.impactautobody.com
Why Impactg Auto Body Is a Member of ASA: “I believe every business owner should get together with his or her peers to share ideas and, if nothing else, to find out that others have the same issues and problems every day. ASA offers a long list of membership benefits but probably none are as valuable as just being able to meet with fellow shop owners and discuss problems and solutions.”

How It All Started? 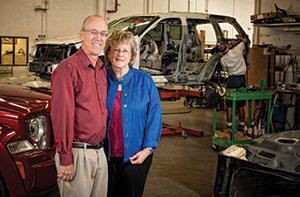 Bob Schubert, with his wife Debbie. Their facility is an I-CAR Gold Class shop. Bob has earned I-CAR Platinum designation, which is given to collision repair professionals who achieve and maintain high levels of role-relevant training that contributes to complete, safe and quality repairs. Bob is a board member for the Phoenix chapter of ASA-Arizona and serves on the advisory board for the East Valley Institute of Technology. 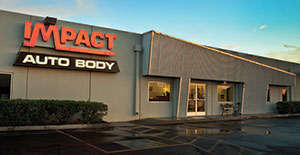 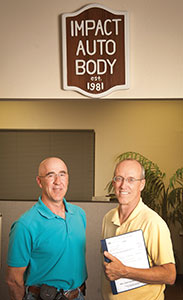 Tom Butka (left) is general manager of Impact Auto Body. He has been with the company 21 years. “Tom does a great job running everyday operations,” says Bob Schubert. “It’s a real benefit to have his level of commitment, experience and loyalty.” 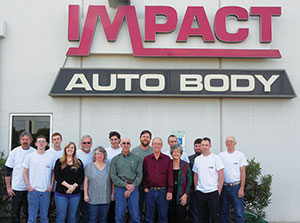