What started in a garage has grown into a world-class facility.

What started as a technician working out of his garage has become one of this nation’s most advanced automotive repair and service centers. Like so many ASA shops, it also has become a family business.

It all began in 1979 when Curt Massoll got laid off at Chrysler’s tech center in Detroit. After graduating from high school, Curt attended Mo-Tech Chrysler Technical School. Later he worked for Chrysler as a testing and teardown technician.

After being laid off, he worked out of his garage for a while. Then, in 1981, he transferred his auto repair business to a Sunoco service station that included three work bays. 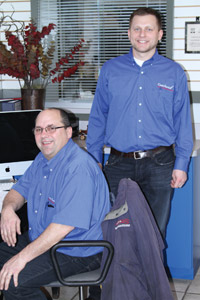 Curt Massoll (seated) and Andy Massoll are both Bosch and ASE-certified technicians and ASE accredited service consultants. Curt founded the business and Andy grew up in it. Andy has served as a technician and service adviser, and is now co-owner and general manager.

Everything possible was done to make the addition “green.” The new area includes water pneumatic lifts, which use compressed air and tap water instead of electrical motors and hydraulic oil. There’s high-efficiency lighting, as well as highly effective insulation, reflective roofing and skylights. The paint is low volatile organic compound (VOC), and there is an on-site recycling collection area.

Curt’s Service opened with the goal of providing the best auto repair in the Detroit area. It has achieved that goal and now, it’s also known as an environmentally friendly shop.

The shop works on all makes and models, doing everything from simple oil changes to dealer-level diagnosis. Curt’s Service is Bosch Service authorized, ASE certified, an ASA member in good standing and a AAA-Approved Auto Repair Center. It has grown from a three-bay service station to a 14-bay, world-class facility. 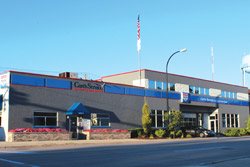 Curt’s Service was one of Motor Age Magazine’s top shops in 2013. It also has been named the best auto repair center in Detroit by Hour, a publication in that city. Since it opened in 1981, it has always strived to provide the best auto repair available in the Detroit area. It operates by the Golden Rule: “Do unto others as you would have them do unto you.”

Curt is extremely proud of what he started and what it has become. He says he got a great education from “the university of hard knocks.” He has maintained his ASE master status as well as his certification as a Bosch automotive technician. His participation in automotive industry 20 Groups has continued to refine his automotive management skills. And he’s often seen in the shop, getting his hands dirty, working right alongside the rest of the guys.

There’s nothing he likes better, though, than to interact with customers. He has always been a highly involved, friendly face of the business. He likes to greet customers and shake hands. He’s also so proud of what he and his team have built that he often takes customers on tours of the facility.

His son, Andy, who has been in the business 14 years and is co-owner, also likes to interact with customers. “But there’s nothing more satisfying to me,” says Andy, “than to observe a customer being handled by an employee with the same care that I would personally deliver. It’s good to see the processes of what we do being done very well, have the customer pick up their vehicle with a smile and afterward write us a fantastic review – all without any involvement from me. That’s when I know I am doing my job well.” 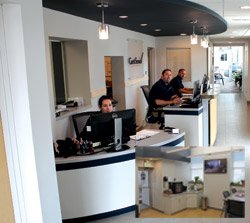 Ready to help customers in the newly redone office area are (from left) Amber Dimmer, Tim Lupu and Greg Dargo. Inset is a view of the customers’ waiting room, which also has been recently refurbished.

Working with family can be challenging, but it also can be a positive, says Andy. “When you need someone to count on, you can always rely on family.”

Andy says Curt’s Service caters to each customer’s situation and tries to deliver a maintenance and repair plan that is best for that customer and that customer’s car. “Our business philosophy is simple,” says Andy. “We live by the Golden Rule: ‘Do unto others as you would have them do to you.’”

What’s ahead for Curt’s Service? “Our addition has given us room for growth,” says Andy, “and we want to keep on pleasing our customers and growing.”

Name of Shop: Curt’s Service
Location: Oak Park, Mich.
Square Footage: 15,000 square feet
Number of Employees: 15
Number of Repairs Weekly: 105
Projected Annual Sales: $2.5 million
Website Address: www.curtsservice.com
Why Andy Massoll Is a Member of ASA: “ASA is a professional organization that has our industry’s best interests in mind. It is good to have an organization like ASA to watch your back and be the voice of reason for the industry to the general public as well as the government.”