When your first guess doesn’t fix an issue, it’s not wise to guess again. It’s wise to follow established procedures.

British educator Thomas H. Palmer is credited with popularizing the proverb, “If at first you don’t succeed, try and try again.” Unfortunately, some under-skilled shops seem to have embraced a modified version of this philosophy, changing it to “If the first guess doesn’t fix it, guess and guess again.” It’s puzzling how much time and expense in parts are often wasted on jobs that end up taking center stage on Show Me The Fix before the vehicle rolls into our bays.

Anyone who takes the time to read this column knows that I believe the key to a successful and efficient repair is to have adequate training, tooling and an information resource. We see it repeatedly: Someone has taken on a job where they lacked at least one of these three components. By having a repeatable diagnostic process, proper tooling and information, we always seem to make these convoluted jobs look easy. 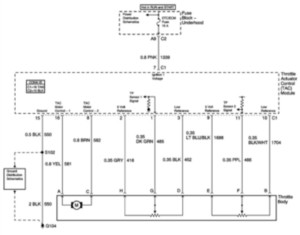 Our ALLDATA service information showed a TAC module had a simple wiring layout. Using this diagram made it easy to decide what to test next.

We received a phone call from a vehicle owner who wanted to get a quote on an engine for his 2003 Cadillac Escalade. Thanks to our management training, we rarely dole out prices on something we haven’t seen before. So we proceeded to vet this customer by asking why he thought he needed an engine. He replied, “It was low on power” and “Another shop had diagnosed it as a bad engine.”

The backstory on the truck was that, while driving, it suddenly lost power. He took it to another garage, and they diagnosed it with a bad throttle actuated control (TAC) unit, which controls airflow to the engine. When that didn’t fix the issue, the same garage installed a TAC control module, which controls and monitors the movement in the TAC. A separate module from the powertrain control module (PCM), it receives commands from the PCM to determine at which set points the TAC throttle blade needs to be set. Of course, the vehicle would never have made it to this column if this task had resolved the issue. When it didn’t, the owner of the vehicle decided to try a different garage.

The next garage opted to install and program an engine control module (ECM). When the ECM didn’t fix the issue, the second garage informed the vehicle owner it would need a new engine. After calling around for engine quotes, a local shop told him that they didn’t do internal engine work, but “Pete’s Garage does, and maybe they can take the engine apart and fix it.”

Monitoring both UART data lines with our Pico Scope showed that our loss of communication was measurable at all four connector points.

Our initial evaluation found a 6.0-liter Escalade with 130,000 miles on it. The engine ran quietly, and the check engine light was illuminated. Also, the driver information center (DIC) was displaying a reduced power message: code P1518 “PCM To TAC Module Serial Data Circuit.” The gist of this code is that the PCM is not receiving a data response from the TAC control module.

TAC control module to PCM communication takes place via two universal asynchronous receiver/transmitter (UART) serial data lines. Clearing diagnostic trouble codes (DTC) restored engine power, and the truck ran fine for a block or two before reverting to reduced power. Knowing that engine repair was off the table, we dived into our diagnosis.

Measuring the TAC motor circuits showed that the controller stopped pulse width modulation. We deduced that current pulled from the motor was overtaxing the current for the module, making the TAC module pause operation.

Using our Solus Edge, we monitored the parameter identification data (PID) that monitors TAC to PCM communication. When the reduced power kicked in, the PID confirmed that we had lost serial data. When a module loses communication, we expect the failure to be one of four types: loss of power, loss of ground, internal controller issue or an issue with the bus wires.

I decided to monitor the UART data lines with our scope, using four leads hooked into both UART lines at both connectors. A quick road test showed the UART dropping out evenly on all four when the PCM reported loss of communication. Then, we moved three of the leads over to the two TAC motor circuits and the ground at the TAC module.

After a short test drive, our scope showed that the TAC motor circuits stopped pulsing, followed by the PCM going into reduced power mode roughly some 300 milliseconds later. We deduced that the TAC motor current was enough to cause the TAC module to shut down. A wiring diagram indicated the TAC module had a single power and single ground. A visual inspection of G104 found the wire had completely broken away from the attachment point on the passenger cylinder head. It looked like we’d found our smoking gun. 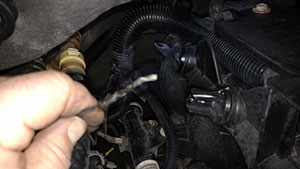 A single broken ground wire was all that was wrong with this truck. We installed a new eyelet, and this Cadillac was back on the road in no time.

Soldering a new eyelet to the G104 circuit and reattaching to the cylinder head resolved the reduced power issue completely.

Looking back at the first attempts to diagnose the problem, the theory of operation was completely disregarded. But it was obvious that at least some of the parts installed were unnecessary. I assume the technician associated the code with the TAC system leading to replacement of the throttle body as a step one.

When that didn’t fix the issue, a second case was made that the TAC control module must be it. This guess might have been made after finally reading and understanding the service information and notating that the code specifies a module-to-module communication issue exists. Installing an ECM was probably a Hail Mary-pass based on hope and desperation, not based on accurate testing procedures. Had the tech measured a few outputs with a scope, it would have become an easy diagnosis for them too.

Possibly, the technicians speculated an intermittent internal issue in one module or the other must have caused the loss of communication. They must not have remembered that modules require voltage and a path to ground to function. But why they recommended an engine is beyond me. Sadly, if the ground had been repaired during the engine replacement, the vehicle owner might have thought the engine was the issue.

Our repeatable testing procedures, philosophy of testing and refusal to guess allowed us to get this Cadillac rolling again.