How not to waste two hours on a simple problem:

Develop a sound diagnostic plan for your shop and, oh yeah, follow it. 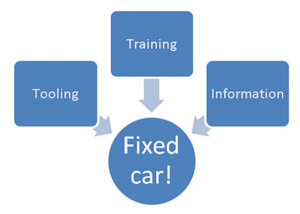 If you don’t have a car fixed right the first time, one or more of these three things is missing – guaranteed.

My team takes great pride in getting the right diagnosis every time. Anyone who spends time listening will hear me say that when cars don’t get fixed correctly the first time, one or more of three fundamental elements are missing: training, tooling or information. To some, this seems like a braggart idea built by a vivid imagination, but it’s really just a simple philosophy that has served our shop well.

Our ignition pattern indicated our combustion would stop and restart; this can be an indication of a fuel delivery problem.

In my shop, when we get a diagnosis wrong we take the time and spend the money to evaluate and learn from it. We make sure the same mistake doesn’t get duplicated. Normally, this Show Me the Fix series showcases jobs where our shop figures out how another shop went wrong. Our example today, though, will demonstrate how our training came up short on what we’d normally expect to be a simple misfire diagnosis. 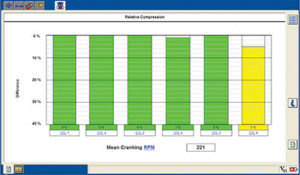 Relative compression testing helped us get back on track.

The vehicle in question was a 2000 Ford Ranger with a 3.0L engine and about 140,000 miles on the odometer. The customer had been coming to us for years, and we knew the truck and the individual well. In fact, a few months previous, our shop had performed a full tuneup at the customer’s request.

Later on, the vehicle owner stopped by to let us know his check engine light had recently illuminated. He thought the engine was running normally but wanted to know if it was a big deal. A quick courtesy code check showed that Cylinder No. 6 had recorded a misfire at some point. The engine was not misfiring at the time, though, so we scheduled a day to do a full diagnosis. Our gut feeling was that a spark plug had been cracked during installation or maybe there was an ignition wire leaking due to a manufacturing defect. 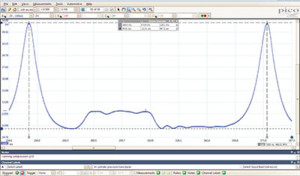 When the vehicle came in, we were able to duplicate the misfire, but it had a tendency to come and go. Our fuel trim data indicated that the powertrain control module (PCM) was taking fuel away, so we set our course of action toward where the unaccounted for fuel could be coming from. We started by checking fuel pressure, which showed to be within Ford’s specified range. An injector fuel pressure drop test was performed and showed all injectors dropping about the same.

Hooking up our Pico 4425 scope to measure ignition produced a pattern that showed our combustion was burning, then not burning and burning again. We thought this supported an assumption that we had either too much, or too little, fuel in the combustion chamber. At this point, we still strongly suspected that we had an injector problem, so we focused on fuel testing. Current-ramping the injector showed no electrical fault. Still, we removed the rail and fired the injectors off the vehicle. But visibly, we couldn’t prove what we expected to be a bad injector. To our surprise, the injectors sprayed well and were not dribbling. 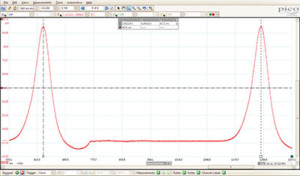 At this point, we had used up our one-hour authorized testing time. Our internal shop goal is to have every job diagnosed inside of an hour, but every once in a while we don’t meet this goal. When this doesn’t happen, we know that there is at least one of three things missing: training, tooling or service information. At this point, we stopped to evaluate what we were doing wrong. Sometimes we’re able to determine we’re on the right track. But this was convoluted and required more testing. In these cases, we sell additional testing time to the vehicle owner.

We decided we had missed something and to redo our testing, starting from the beginning, on the shop’s dime. Our normal misfire diagnosis would include a relative compression test followed by an in-cylinder capture with a pressure transducer, if we saw a low cylinder. But in this case, we had skipped that process the first time because we had recently tuned up the truck and expected the issue to be related to that work. This go-around, though, we did perform a relative compression test that showed Cylinder No. 6 was slightly low. 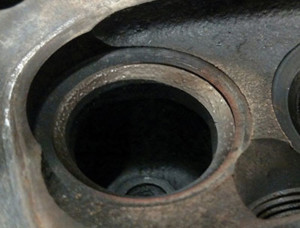 Valve seats ended up being the culprit in this case.

We scratched our heads for a minute before deciding to do an in-cylinder waveform of cranking compression. Instantly, we realized where we had gone wrong. Our cranking waveform showed a clear and obvious valve sealing issue with Cylinder 6.

Now having a complete diagnosis, we called the customer and explained our findings. We informed him of the worst-case scenario, dollar-wise. He subsequently authorized us to remove the head and identify the cause of the poor sealing, having a clear understanding of the monetary implications of the repair. Disassembly showed carbon had damaged the valve seats to the point that it could not reliably seal. Based on the condition of the exhaust seats in the bank No. 2 cylinder head, we removed the bank No. 1 head and disassembled it as well. Of course, we found equally poor exhaust valve seats in this head.

It was obvious, then, where we had screwed up. It was in our training, which means we didn’t follow our proven diagnostic path. Usually when we’re diagnosing a car that another shop could not fix, it’s because they lacked one of the three fundamentals and also lacked a fundamentally sound diagnostic approach. I’m often critical of shops that choose not to employ a sound diagnostic strategy, but our failure in this case was almost worse because we do have one. We were arrogant and presumptive, and because of it we lost a good two hours chasing our tails. It wasn’t until we went back to our training and followed our diagnostic plan that we were able to produce the ironclad result we expect from ourselves.

We installed a pair of new cylinder heads, and in the end the truck was back together and running great. The customer was happy, and we wrote off the extra diagnostic time as a training exercise. I suspect we won’t get burned on a similar diagnosis down the road. And fortunately for us, these sorts of shortcomings we don’t get stuck on often, thanks to our service-ready approach to fixing cars