Andy Bizub: ‘You can’t please everyone… and that’s okay!’ 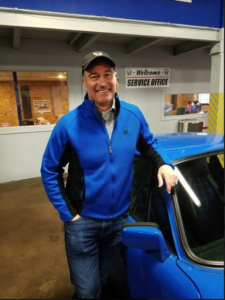 This article initially started out as something completely different.

I was going to write about the things I’ve learned about franchising, and some of the potential pitfalls of becoming a franchisee.

As I was mentally wrestling with how best to construct the article, good old Social Media gave me an experience that planted the seed for the article that follows.

What I’ve learned is… you can’t please everyone.

That is an obvious statement that you would think does not bear mentioning. As a shop owner myself, however, I know it is helpful to be reminded of certain thoughts and principles from time to time.

Getting positive confirmation from industry peers – or other small business people – can be helpful in resisting the daily slings and arrows that inevitably come your way as part of being an entrepreneur.

Here is what inspired this topic: I was spending an hour on a Sunday afternoon, browsing my Facebook feed. This includes an online 20-group and a few shop owners’ groups, as well as several enthusiast groups, mostly centered around my favorite brand of car, Porsche.

In one of the groups, someone had posted that he was looking to purchase a vintage or classic car and wanted to hear suggestions as to what kind of car he should consider.

As you could imagine, numerous comments followed, and I posted my own. In it I mentioned a client of my shop was offering his restored 1974 BMW 2002 for sale at a reasonable price. I told him to “direct message” me if that was of interest to him.

(Full disclosure: I have no financial or other interest in the sale of this vehicle. I was merely mentioning it as a favor to my client).

In short order, the gentleman on Facebook messaged me, inquiring about the details of the car for sale, including the asking price. When I informed him of that price, he replied “that’s a lot more than I was expecting, ‘you said reasonable,’ and how there were similar cars near where he lived for less money.

I replied that I was sorry this did not fit what he was looking for, and that it was a full restoration, hence the mid-teens price.

What followed is the exchange that gave me the idea for this article. This gentleman, who I never had communicated with previously, felt compelled to send me pictures of a car he bought years ago at a lower price than my client’s car. He also sent a description, pointing out how it “only needed paint” when he bought it. All of this part of an effort to somehow let me know that my client was asking too much for his restored, 45-year-old classic BMW!

This got me to thinking about today’s environment of online reviews, running comment threads, and all the generally critical, often smarmy, and ultimately time-wasting negativity that is a part of the internet-connected life of nearly every small businessperson nowadays.

The exchange with the gentleman on Facebook was fairly benign as these things go, but it certainly didn’t require a diatribe of this man’s car-buying and pricing experience. It wasn’t being offered in the enjoyable, positive way that enthusiasts usually talk about their latest automotive acquisition.

As is usually the case in these situations, I would wager that the dialogue would have never played out that way had we met in-person, but the anonymity of the keyboard and screen lent a hard edge to our interaction.

As I thought further about this, more examples came to mind, examples of what I call, “The Cranky 5 percent.”

You can find these people on nearly every YouTube comment section, and in the Yelp and Google review streams of businesses.

It doesn’t matter how great the company, or how informative the video or article may be, there will be someone out there who has a problem with the product, service, or content being provided.

Another flabbergasting example (at least to me) is a particular YouTube video that I saw – one that I think was very well-done, provided some good information, and was entertaining to boot.

Larry is a true craftsman, has a YouTube channel with over 700,000 subscribers, and his informative videos receive anywhere from thousands, to millions of views.

Again, I have no commercial connection to Larry. I just like his content. The video I refer to consists of Larry talking a bit about how he tracks his modified Porsche 964, and how he wanted to learn about the technical side of engine oil products.

He traveled to a well-known brand’s oil production facility accompanied by a video crew. He took his viewers on a tour, speaking at length with a petroleum scientist about oil specifications and what they mean. Keep in mind, Larry does not sell oil, and he was not advertising anything for sale in this video. It was purely an informative piece.

Well sure enough, when scrolling down through the nearly 2,000 comments below the video, there are a few petty, unduly critical, and just plain ignorant ones.

It just boggles the mind why anyone would find fault in a free and informative video that was produced in a friendly narrative. It happens to the best of the best!

In my own Chicago shop, out of the more than 1,000 visits we have annually, interspersed with the many 5-star reviews that speak glowingly of our service staff and technicians, we will get about five 1-star write ups (unjustified in my opinion, of course).

These have a negligible impact on our Google rating, but of course, with Yelp’s “Secret Sauce Algorithm” continually burying positive reviews into the Not Recommended pile, it hits our Yelp star rating a bit more.

When I first started out as owner of my shop, I took these on a much more personal and hurtful level.

While I still cringe at our approximately five-tenths of a percent negatives, I have learned and come to accept that it is just a part of our society and culture today. It actually provides me the opportunity to reply in a respectful manner, laying out the facts of the service visit and inviting the person back into the shop in order to address any misunderstanding or dissatisfaction.

In any endeavor, a 99.5% satisfaction rate is, of course, stellar.

But oh, how it hurts when that 1-in-200 bad review or online dispute occurs, right?

And that’s because as shop owners, we pour our heart, soul, and identity into our businesses, and we take things personally when a hiccup occurs.

So, it is important to remember, that conflicts, disputes, and poor reviews happen to the best of the best in all lines of business.

You can’t please everyone… and that’s okay!