Ahead: A Second Century For This Massachusetts Shop

How generations of a family grew their business from buggies to a brand.

• World War I began and the first traffic light was installed, in Cleveland.
• Ford Motor Co. offered workers an eight-hour day and a daily wage of $5 (they had been working a nine-hour day for $2.50).
• Henry Ford introduced an assembly line to build the Model T.
• Six-hundred miles east of Cleveland, Willis Fuller decided automobiles were the future of transportation and switched from horse-drawn buggy repair to the automobile and its internal combustion engines with electric ignition wiring. 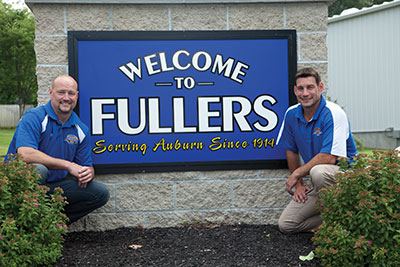 While Willis worked out of a barn in the 1930s and ’40s, Freeman not only followed in his father’s footsteps but competed with him from a residential garage. Then, in 1951, Freeman built the 68 Auburn Street location, added gas pumps and expanded the business into other areas of auto repair.

In 1961, Freeman’s son, Richard, continued building on the foundation of his father and grandfather. He added other branches of auto services and sales, including two dealerships that have since been sold, Rusty Jones Rustproofing (also sold), a dealer services outfit with retail alarm and stereo equipment (owned and operated by Richard’s oldest son, Jeff, who has since sold it and retired) and a car wash (now owned and operated by Richard’s cousin Ricky) that’s still at the 68 Auburn Street location.

The fourth generation of the family, Richard’s sons, Chris and Joshua “Josh,” both began carrying on the enterprise after graduating from college in 1997 and 2001, respectively.

Chris says, “The simple concept of working hard and being good to people has guided each generation into the future.” Josh adds, “The drive and passion for this industry is a family dynamic that is easily summed up by each generation wanting to do better than the ones before them.”

The Fuller family and its employees are strong believers in the statement that “you get back more than you give.” And giving back includes involvement in the community. Every year, Fuller Automotive donates thousands of dollars to local causes.

For example, in 2009 the firm gave $10,000 to the Auburn high school for a new scoreboard. In 2012, it donated $10,000 to the local sports complex. In 2012, Fuller AutoBody participated in the “Recycled Rides” event, along with Hanover Insurance and other local vendors. As a member of the National Auto Body Council, Fuller repaired and donated a recycled vehicle to a family in need. 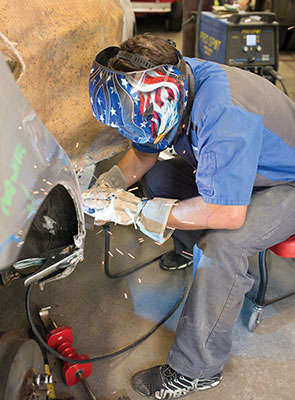 The Fuller family has a long history of community activism. Josh puts it this way: “Not only are we happy to offer financial support in these areas, but we enjoy being part of the committees and decision-makers that see these individual projects from start to finish. We continue to be members of the Chamber of Commerce and Better Business Bureau.”

In addition, the company actively supports initiatives of the automotive service industry. The brothers are heavily involved with industry groups and organizations. Josh, with the Inter-Industry Conference on Auto Collision Repair (I-CAR) and the National Institute for Automotive Service Excellence (ASE). The facility maintains an I-CAR Gold Class designation and serves as the only I-CAR training facility in central Massachusetts. Each year it hosts more than 40 training seminars for industry professionals.

Chris served on SpeeDee Oil Change’s National Franchise Advisory Council (NFAC) from 1999-2011 and stepped down as president because of a term limit. He then served on CARQUEST’s National Tech-Net Council in 2011 and 2012 and now currently leads the Central Massachusetts chapter.

Chris and Josh also have been involved with the local vocational high school for a number of years, serving on the school’s advisory board and employing current and former students.

To what does Fuller Automotive owe its success? “Our consistent investment in repair equipment and technology keep us from becoming outdated,” says Chris. “But the key reason for our success is our dedicated and engaged employees, whose efforts, as much as ours, have led to generations of loyal customers.”
Their plan for the future? “Keep growing,” agree Chris and Josh.

And if the first 100 years are any indication, Fuller Automotive has a sound foundation that will help them do just that.