Should your customers fix their old cars or buy new ones? It depends on if they understand “cost of ownership.” Do you? By Pete Rudloff

It’s not unusual to have a customer in my shop who is pondering whether to replace their car or invest a significant amount of money into keeping it reliable. Sometimes, it’s a new customer who has never had a thorough evaluation of their vehicle. Sometimes it’s a customer who has just put off repair after repair until the list of repairs grows so large that it dwarfs the value of the car. Or sometimes, it’s someone who typically keeps up with his or her vehicle and has just encountered a major breakdown.

So what’s the right call: Fix it or junk it?

Because our customers trust us, they look to our shop’s guidance for what makes sense. We have a strict policy of not telling them what to do, but we provide them with the information they need to make a sound decision. I typically tell them they can’t choose badly if they take the time to look at the facts, because they’re simply picking what works best for them.

The most common statement a customer makes after receiving a large estimate is, “Pete, the car isn’t worth putting $4,000 into it because it’s only worth $3,000.”

That’s a popular myth that many service facilities across the country, and probably the world, perpetuate by offering the same sentiment as their opinion. I say it’s a myth because it simply isn’t logical to use the sales value of your car to justify not paying what it costs to fix it – unless you’re in the business of buying and selling used cars. In that case, like any other business, you need to buy low and sell high. The two monetary issues have little to do with each other.

That’s probably why it’s so hard to find a great used car on a used-car lot. Repairs do not increase the value of a car, and increasing a car’s value is generally a poor reason to fix a vehicle. So let’s look at the financial aspects of owning an automobile.

In fact, many automobiles will cost more per year to insure and fuel up than they cost to repair. And the longer you own the car, the more it drops in value as it ages. None of this adds up to an investment. It’s the cost of having the lifestyle you want to have.

If your customers are looking at the vehicle’s sales value to determine if it’s worth fixing, they’re looking at the wrong statistics. So, if not cash, what is a vehicle owner’s return on investment (ROI) for owning a vehicle? Simple. It’s miles driven.

Think about how powerful that is. Don’t we typically own a car so that it can take us places? Why should we care what a car’s selling value is once we own it? Shouldn’t we care about the car’s reliability, whether it suits our lifestyle and its overall cost of ownership? The average car owner can usually wrap their head around this concept if you show them how to properly calculate their ROI.

There are four primary areas of costs associated with owning a car:

Cost of Purchase: This is simply what you paid for the car. This number varies greatly because some folks buy new and expensive, and others buy used and cheap.

Fuel: Self-explanatory, but it varies. Depending on your car’s fuel type and how much you drive, your fuel costs could be high or relatively low.
Insurance: Most states and municipalities mandate insurance coverage and its costs vary greatly depending on driving record, vehicle type and location.

Repairs: This is probably the most despised area of vehicle ownership, but it’s a fact of life. Cars break, and it can get pretty expensive to fix them.

Fiscally savvy folks typically average out their ownership costs by the mile. I think averaging per mile is difficult for many people, so I prefer annual averaged costs. They’re easier to understand and give a better big-picture view of what the vehicle costs to keep on the road.

Then I’d look at their current vehicle’s repair history. Let’s say we’re dealing with a 10-year-old car for which they paid cash and have owned for four years. Generally, we want to look at the past three to five years and figure out what all the repairs and maintenance have cost over that period of time.

Longer durations are better because the calculations typically are more accurate the longer they own the car: Brakes, radiator, water pump, tires or timing belt (and don’t forget that lone wheel and tire from when you whacked a pothole after a big storm).

For those who prefer to calculate by the mile, that’s about 11 cents per mile. Looking ahead, they should expect their car to average somewhere near this number annually – some years less, some years more. 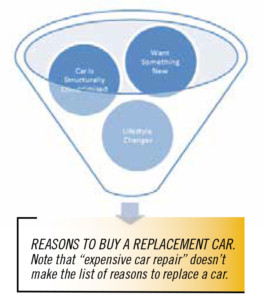 Meanwhile, the new car would cost $19,200 over the next four years in just payments. That’s roughly 40 cents per mile just for payments! Remember, on top of those payments there’ll be some maintenance costs, maybe some minor repairs, but that will only drive up their cost per mile. And as the new car ages, they’ll have all of the other advanced repairs the current 10-year-old car is dealing with. The good news is that once the vehicle owner has finished paying off the car, per mile costs will drop significantly. Of course, that’s only six years away if they buy today.

In the best of circumstances, the new car is going to cost $13,000-$14,000 more to own over the next four years, and it still won’t be paid off for two more years. In this example, the vehicle owner would be roughly $23,000 ahead if the owner kept their old car for six years. For some folks, this isn’t much money and having that new-car smell for a few months makes it worth the extra cash. But for others, once they realize the financial impact to their bottom line, they may be more inclined to keep their old car running a few more years and keep their money in the bank – or spend it on something more rewarding.

The formula above invalidates the argument that the old car isn’t worth investing in, based on the car’s retail value. The old car is paid for, so hands down it’s the cheapest option– if it is fixable. So the questions that need to be asked are:

Is the old car fixable? If the structure is so bad that a good pothole might cause the car to break in half, then it’s not. Those of us in the Northeast know what this is like. A professional auto shop has an ethical responsibility to report this accurately. After all, we have to share the roads with this car. In my shop, we counsel a handful of vehicle owners every year that it’s time to take their automobile to the junkyard due to rust damage.

Does it suit their lifestyle? That Corvette they bought when they were 21 doesn’t seat their expanding family, so it might no longer make sense to own it. Maybe a four-door sedan or minivan is a better fit now?

Do they like their current car? If they don’t like it, they should go car-shopping ASAP, if they can afford it. Cars cost too much to keep on the road, and life is too short to have a car you don’t enjoy. The most valid reason to replace a car is that you want something else.

If the answers to the above questions indicate that the current car is suitable and can be made safe, all you need to do as the service writer is show them how the economics make sense. From there, the decision to fix it is less about what makes the most sense and more about what the vehicle owner wants.

Sometimes, the vehicle’s owner is not well off financially or hasn’t budgeted for a vehicle breakdown. They may be just scraping by week to week, and anyone who’s just scraping by probably isn’t capable of making sound, logical decisions. It would be a waste of time to demonstrate how to calculate cost of ownership. This type of person reasons that a six-year addition of a monthly payment is cheaper than the expensive repair they’re facing. But the math proves this isn’t accurate.

Some people will convince themselves that if they can do it for four or five months, they’ll be OK. The problem arises when the car they’ve bought turns four or five years old, has a major breakdown and they need to come up with the money to fix it. 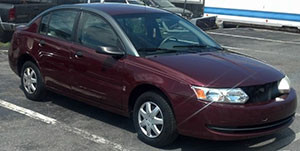 Remember, it isn’t the shop’s choice to make. We just need to supply the information so that the vehicle owner can choose what’s best for them. Don’t worry if they choose to buy a new car. It’s important for the used-car market that someone takes the plunge and buys new because every new car bought today is a used car that we’ll work on tomorrow. It’s like having money in the bank from our standpoint.

I’ll generally advise my customers not to make significant investments if they feel like they are at the end of their ownership. From a fiscal standpoint, they are typically better off selling a broken car than paying to fix a car and then sell it. Remember: Car repairs do not equate to retail value.

Another concern that’s often raised is, “Is my old car reliable?” I’ve seen no data that empirically proves that a new car is significantly less likely to break down than a 10- or 15-year-old car. In fact, most auto manufacturers have a track record of having more than 100 problems per every 100 cars they produce. If you pay attention to the model year of most of the cars inside of a manufacturer’s dealership repair facility, you’ll find that most of them are younger than five years old.

A warranty does help compensate for new-car repair costs. However, the cost of those breakdowns was factored into the original selling price. Breakdowns are prepaid at the time of purchase and covered for a set period of time.

That’s a subject probably best left for another article, though. Until then, educate your customers on the value of fixing their older cars. More importantly, don’t perpetuate the myth that a car isn’t worth fixing based on its retail value.