Tom Piippo’s One Eye in the Mirror: Trends & Facts from AAPEX & SEMA Shows

One eye in the mirror is only looking a little way back this time. While just returning from the AAPEX and SEMA shows in Las Vegas, I thought I would share some trends and facts while still fresh. 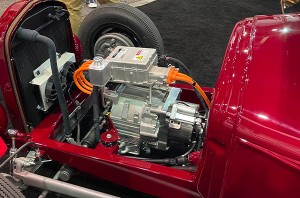 While the world governments are all advocating Electric Vehicles (EV) it seems the aftermarket and fabricators are also on board with the idea. I saw several E-Rods, Hot Rods with electric power, of all shapes, sizes and colors: ‘32 Fords, a Shelby Cobra, ‘65 Chevy Pick-up, even a side-by-side UTV. I went to a class on electrifying your classic car. This class was more of a ‘why or why-not’ instead of a ‘how-to’ class. The torque is instant, the power is impressive even if the range is short, most guys only drive their hot-rods a few miles from home, anyway! The presenters were very knowledgeable and shared the fact that 5 years ago the only way to do this was with salvaged parts, but now-a-days there are several suppliers for batteries, controllers, inverters, electric motors along with educational classes so you don’t electrocute yourself if you want to take on this project. There is not much bling to an electric motor under the hood, but it sure looks interesting with 3 orange cables terminating in a polished 12” aluminum housing! 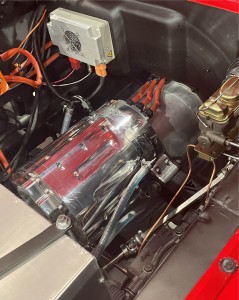 Another class I attended was “ADAS and the modified vehicle”. (Several years ago when I was director of the Mechanical Operations Committee, we asked the question of SEMA (Specialty Equipment Manufacturers Association) on what they were doing about ADAS systems on modified vehicles.) SEMA took a very scientific approach to this. SEMA now has 2 garages, one in California and one in Plymouth Michigan. Both very large, well-equipped facilities. The Plymouth garage has one bay dedicated for ADAS calibrations with all the OEM factory tooling available. SEMA has used many vehicles in stock form and measured the sensing ability of radar, lidar, optical camera and ultrasonic sensors and documented the data. It was pointed out that a front radar unit out of adjustment by just one degree will have an error of 8 meters at 35 meters distance. A leveling kit of 2.5 inches in a pick-up will result in a .9-degree angle change on the frame. It was demonstrated on how an aftermarket bumper fascia will affect the radar’s ability to transmit and receive properly through the thicker or denser material. Heavy welded truck bumpers and winches can block the signal entirely. 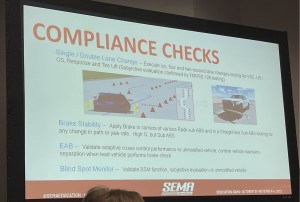 The SEMA garage also tests most aftermarket ADAS calibration equipment also to determine their accuracy with the OEM tools (AsTech, Autel, Opus IVS, Hunter, John Bean) It was also pointed out that there is no one way to achieve adaptive cruise control and automatic emergency braking. Some use radar, some use cameras, others use both! It was also pointed out that there does not seem to be a standard for performance of these systems as far as distance sensed and aggressiveness of reactions. It was noted that ‘most’ domestic vehicles can be calibrated with only a scan tool and a drive cycle, while ‘generally’ asian and euros need the static calibration with optical targets. 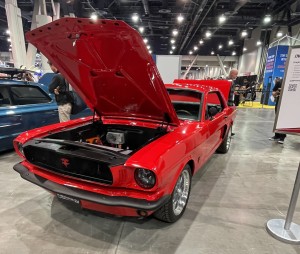 In the end we learned that aftermarket re-fitters are doing their best to develop a baseline of performance with ADAS and replicate that performance after modifications (lifting or lowering) along with road testing and ‘seat of the pants’ evaluations. Some manufacturers such as GM, Toyota and Ford offer dealer-available lift kits which would be the preferable way to achieve a lifted result with uninterrupted ADAS performance. With this you are usually limited to 2 or 3 inches, If you are looking for an 8” lift with 40” tires… all bets are off!

Currently there are no federal regulations that vehicles need to be equipped with automatic emergency braking, even though almost all new cars and light trucks have it. In 2011 the federal government mandated electronic stability control along with ABS, but I think the automakers see the regulation coming and personally I think there will soon be some standards related to performance of these systems. These are truly interesting days!

Tom Piippo's One Eye in the Mirror: It’s OK to Say No