The number of crashes that could be avoided if drivers left car safety features on — why don’t they?

A national survey by Erie Insurance found a significant portion of U.S. drivers turned off or disabled features designed to make their cars safer

Erie, Pa.—A national survey by Erie Insurance found a significant portion of U.S. drivers turned off or disabled features designed to make their cars safer, in part because they found them annoying or distracting. A new analysis shows the estimated percentage and number of certain types of crashes that could have been avoided that year had drivers left the safety features on.

Specifically, it found that:

The analysis also looked at the potential safety improvements that could be achieved if all cars had the safety features and left them turned on. For example, if all cars had automated emergency braking and drivers left it on, crashes could be reduced by 750,000.

Survey ranks 11 car technology features drivers disable most and why

Even experts who welcome technological advances that improve safety concede there’s an adjustment period. Below is the list of features drivers were asked about ranked by the percentage of people who said they had turned off or disabled it. Since drivers called every feature they had disabled annoying and/or distracting, additional reasons other than those two are also listed: 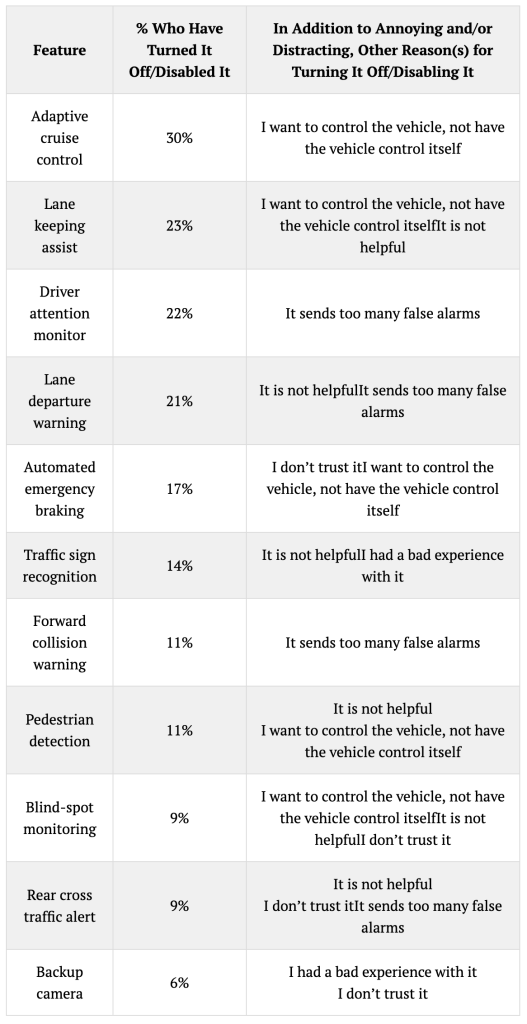 Drivers were also asked whether they would want each feature if they were buying another vehicle today. Adaptive cruise control was the least popular feature by far, with more than a third of drivers (35%) saying they definitely would not want it. The percentages of drivers who definitely wouldn’t want any of the other 10 features were all in the single digits.

In terms of how they learned to use the features in their vehicles, the largest percentage (38%) learned at the car dealership, a third (32%) figured it out while driving and 14% learned by reading the owner’s manual. Seventeen percent of the 18-24-year-olds learned at a driving school and smaller percentages read about it or watched videos online or learned from a friend or family member.