The Future of ADAS: The next big repair opportunity grows

By Brian Wheeler / For Aftermarket Matters

Over the past two decades, one of the fastest-growing automotive electronics segments has been Advanced Driver-Assistance Systems (ADAS).

Simply put, ADAS are electronic systems in a vehicle that are designed to use advanced technologies to assist the driver. Consisting of categories such as blind spot detection sensors and lane departure sensor cameras, these active safety products are equipped on many late-model vehicles.

And according to a March 31 report from Roland Berger (“Advanced Driver-Assistance Systems: A Ubiquitous Technology for the Future of Vehicles”), by 2025, ADAS will be a common feature of nearly every new vehicle sold in the developed world, with only 14 percent of vehicles forecast to have no ADAS features at all. The global ADAS market was valued at $20.15 billion in 2017 and is projected to reach $92.25 billion by 2025. 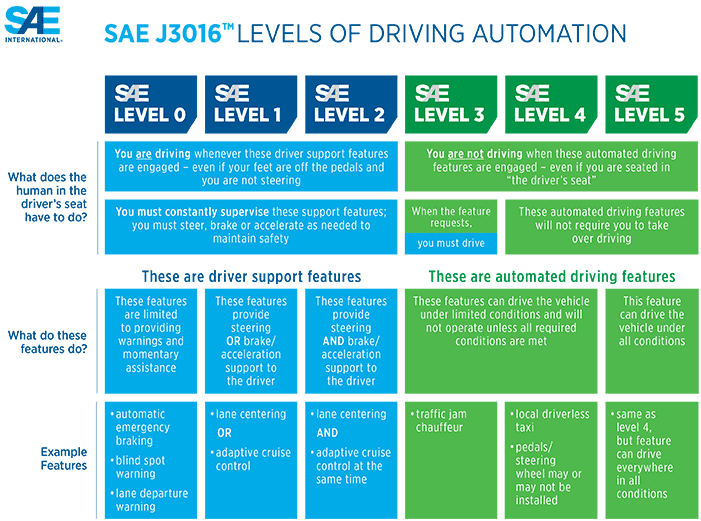 In the United States, specifically, ADAS availability is expected to significantly increase across the board by 2025. Roland Berger predicts more than 50 percent of new vehicles sold will have L1 technology, 35 percent with L2 technology, 9 percent with L3 features, and only 1 percent with L4/L5 technology. That same year, they anticipate less than 5 percent of American vehicles to have no ADAS features beyond simple warning indicators. 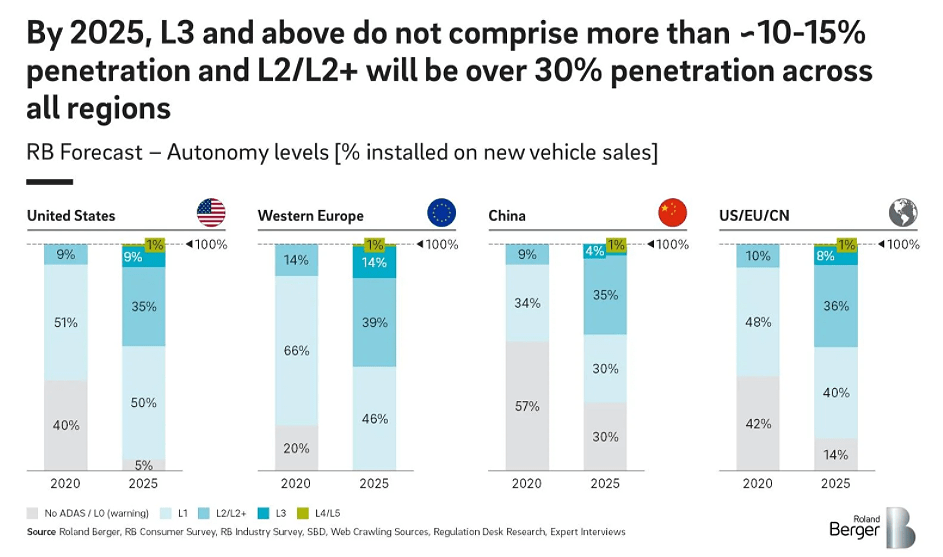 It is important to note that the scale from Roland Berger is different than others, such as that of SAE International. As shown above, SAE’s chart is designed to clarify and simplify its J3016 Levels of Driving Automation standard for consumers. The J3016 standard defines six levels of driving automation, from SAE Level Zero (no automation) to SAE Level 5 (full vehicle autonomy).

As ADAS technologies have become commonplace on vehicles, repair opportunities have also grown. In 2020, 60 percent of vehicles sold in the United States were equipped with L1 and L2/L2+ ADAS technologies. Due to their locations throughout vehicles, many ADAS categories are prone to damage from even minor collisions. Looking out to the future, as well as opportunities today, it is imperative that shops and professional technicians are prepared to service these components when they arrive in service bays, especially considering that many ADAS parts are expensive, generate profit, and can be easily damaged.

For example, blind spot detection sensors notify drivers to obstacles in their blind spots. Typically located on both corners of the rear bumper, the sensors tend to be damaged by minor rear-end collisions and even inaccurate parking.

Lane departure sensor cameras notify drivers if the vehicle leaves a lane without a turn signal activated. Typically located on top of the windshield between the rearview mirror and windshield, the cameras can be damaged by both extreme sun load and objects that hit the windshield in the location point. And speaking of costs, Consumer Reports (“The Hidden Cost of Car Safety Features”) found that a typical windshield replacement costs roughly $300 – $500. An ADAS-capable windshield may cost a consumer $700 – $1,500, but the repair bill doesn’t end there. Sensor and camera replacement can cost anywhere between $800 and $1,900, and those technologies need to be recalibrated at a cost of generally $250.

Lastly, park assist sensors (also known as backup sensors) alert drivers to approaching objects when in reverse. Located on the rear vehicle bumper, the sensors are damaged by rear-end collisions and are prone to high OE failure rates.

Recognized as a thought-leader and well-versed professional in the global automotive industry, Brian Wheeler is a business development, marketing, communications, and sales executive with close to 20 years of experience, specializing in the global automotive OE and automotive aftermarket industries. He joined Standard Motor Products in 2021 after spending most of his career on the supplier and agency side, having managed global OE and aftermarket marketing for a Michigan-based Tier 1 supplier; built a Detroit-based marketing agency’s auto business; led all marketing, product management, and EMEA sales for an engine components supplier, and most recently directed automotive marketing initiatives for global professional services firm Deloitte.