The ‘Doctor’ Is In

At Chicago’s Sinclair Auto Clinic, the cars and the times have changed but not the treatment.

Jim Sinclair takes a call at the front counter.

No doubt about it. James F. “Jim” Sinclair is old school. He admits it. But Sinclair also works at staying current, and he has his eye on the future. And when we say old school, we mean that in a good way.
When Sinclair grew up in the business, basic things like honesty and doing good work were important. They still are, and they’re still part of him today. Some things never go out of style. 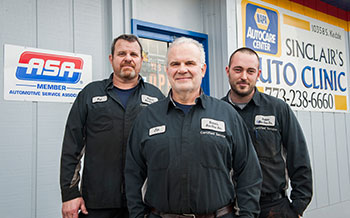 Sinclair, center (shown with his brother, Pat, left, and other employee Anthony Douglas), proudly displays his Automotive Service Association sign on the outside of his shop.

To keep up with the changes in cars, Sinclair takes advantage of training opportunities. He attends classes, reads industry publications and has a large library of training DVDs. He also gets a lot of information from iATN, the Automotive Service Association (ASA) and Identifix.

“If I run into something new, I’ll stay after closing and spend whatever time necessary to learn that system,” says Sinclair. “I also believe in having the right tools and equipment. I have many of the factory scanners along with several others.”

Sinclair has been using computers to manage his business for years. But he’s observed that his son and daughter live on their phones or computers. “I’ve learned that social media is necessary to reach the younger generations,” says Sinclair, “and I’m determined to use it in my business. Part of my being old school is that I believe in repairing an engine or transmission rather than replacing it. I believe in diagnosing a problem rather than just installing parts.”

His ASA-member shop – Sinclair’s Auto Clinic Inc. – has been serving vehicle owners in Chicago’s south side for almost 35 years. It represents the best in that city’s automotive repair and maintenance industry. It’s a NAPA Auto Care shop.

What makes his business special, Sinclair thinks, is that his customers know they’re dealing with an honest shop. “I’m very fair with my customers,” he says. “I don’t believe in selling anything that’s not necessary. I stick behind everything that goes out of my shop 100 percent. Eighty percent of my customers are from word of mouth, which to me is the best way to get a new customer.

“We call ourselves a clinic because we diagnose and treat your automotive needs with the same professionalism and expertise that a physician would treat your body. Whatever is wrong with your vehicle, our technicians will properly diagnose the problem and fix it.”

Among his many customers is Dan Risley, the president and executive director of the Automotive Service Association, who recently took one of his vehicles to the shop. Risley says: “Having four children who drive and six cars in the Risley ‘fleet,’ it’s reassuring to have a trusted automotive service and repair shop that provides outstanding customer service. We’re proud to have Sinclair’s as an ASA member. It’s a great example of what a high-quality, family oriented business should be.” 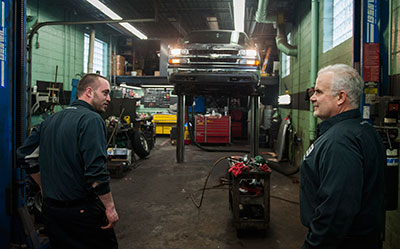 With employee Anthony Douglas, he prepares to go to work under a truck.

Like so many other independent automotive repair shop owners, Sinclair grew up in the business. He started at the age of 12 by going over to a neighbor’s garage and watching him work on cars. Gradually, the neighbor began letting him help.

While in high school, Sinclair worked part-time in the parts department of a dealership. Later, while working for the General Motors’ dealership, he attended the AC Delco training center.
Sinclair is an ASE master tech with L1 certification. “I’m mostly self-trained,” Sinclair says. “I read and comprehend well. I take my time on something, and I will spend as much time as necessary to learn it.”

What does he like best about his job? Solving problems on cars, says this Chicago shop owner. “I don’t quit until I find the problem, no matter how much of a loss it may be. I like the feeling of finally solving it.”

What does the future hold for Sinclair’s Auto Clinic? “I enjoy what I’m doing and plan to continue for many years,” he says. “But I want to get more involved in social media. It seems to be necessary for the future.”