To sell tires, or not to sell tires? How one shop owner’s inquiry into new technology led him to burn rubber in a new direction. 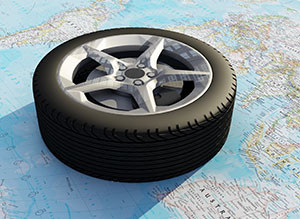 Some “truths” are true or untrue, depending on an individual’s perspective. For example, up until about A.D. 500, many people of science thought that if sailors took a ship out too far into the ocean, it would fall off the edge of the Earth.

Throughout history, and even in modern times, there have been, and will be, certain scientific “truths” that turn out to be untrue. Many of us learned in school that Christopher Columbus proved the world was not flat. In fact, Columbus would have had complete confidence and public support to know the Earth was round because his famous trip occurred some 1,000 years after it was established that the Earth was round. Throughout society, and even in the automotive trade, there exist many examples of one person’s truth being someone else’s myth.

For example, pack 50 automotive service shop owners into a room and say the word “tires.” Then, carefully watch their reactions. Some of them facepalm and groan while others grin with delight. Tires have a reputation for being either a wonderful profit center or a loss-leading cost of doing business. Which is the “truth?” The simple answer is they both can be, depending on your perspective.
According to management guru Bill Haas of Haas Performance Consulting, “Customers are too hard to come by today and easily influenced to try a competitor. Make your store their one-stop shop for all their automotive service and repair needs.

“Either invest in the equipment and training to offer tire sales, or sell tires and arrange to have the tire work performed as a sublet-repair,” Haas says. “You already know the customer prefers to do business with your store. Why would you allow them to go elsewhere?”

That is the fundamental reason I started selling tires. What I know now, but didn’t then, is that there are ways to sell tires without going broke.

Early on as a shop owner, I hated tires. They were inconvenient to price out, difficult to acquire and there were so many sizes it didn’t make sense to stock a single size. So we’d never have what we needed in stock. While our equipment worked well, I was never fully satisfied with the results after balancing tires with it for my own personal car. If it couldn’t make my tires perfect, it stands to reason my customers tires were less than perfect, too.

We didn’t receive a lot of complaints, but some customers noticed a slight shake at 55 mph. It was slight, but it was there. I remember bitterly eating a few sets of tires to keep clients happy. And to add insult to injury, I believed that tires must be sold competitively with the big national tire outfits, an impossible endeavor to do profitably.

After the tires were paid for, the employees paid, valve stem and weights accounted for and tires properly disposed of, I was netting about $5 to $7 per tire. For this princely sum, I was accorded the privilege of standing behind the tires if my customer didn’t like how they rode on the highway. This situation became such a source of irritation that my employees stopped using the word “tire.” This was my truth.

That insanity continued for years, until I had an epiphany. I realized I didn’t have to accept tires as being unprofitable, inconvenient and incapable of being properly balanced.

I started researching tire installation and discovered a concept called road force variation (RFV). To understand RFV, think of a tire’s sidewall as a series of coil springs. When a loaded tire rotates, it steps from one spring to the next, and because manufacturing techniques don’t exist to make a tire’s shape 100 percent uniform, it creates variation in the amount of stiffness or spring. This variation results in a vibration that cannot be corrected through balancing alone.

Differences in tire RFV will create an egg, or maybe a football, shape as it rides down the road. When this happens, no amount of balancing will fully resolve the issue because the tire and wheel assembly are not round. Very few balancing machines have the capability to measure RFV. After concluding that part of my research, I realized that the reason we were seeing slight vibrations after some tire installations was excessive RFV.

Further research indicated that shops with the capability to perform RFV measurements were charging a premium for the service, but they rarely performed it. And the reason for this was a fear of not being price competitive. There’s a higher cost when the tire installer must take additional steps to get the assembly into the desired RFV range. I also discovered that most vehicle manufacturers either correct RFV, or they design tires with a known RFV and install them in a way that matches the known rim variation.

That’s one of the reasons new cars ride so smoothly when they’re new. Hmmm? More money, and we’re offering a more valuable final product. Suddenly, I began looking at tires in a more favorable light. So I purchased a machine capable of measuring and recommending the correction of RFV.

I revamped our tire installation process and pricing significantly. We implemented a road-force-only policy in the shop that dictates all tires get RFV checked and corrected before balancing takes place. The manufacturer of our new equipment helped us adopt new best practices in our tire installation procedures, and that first year we sold more than three times as many tires as we had the previous year. This was directly related to the confidence I had in the quality of work we were producing and the fact that it was financially viable work for us to install tires perfectly.

Almost immediately after we changed our philosophy, we began receiving phone calls from customers after they had driven a few days on their new tires. Unlike before, the phone calls were praising how well their cars rode since the tires were installed. We heard comments such as, “My car has never driven so smooth” or “It drives like brand new again.”

We’ve had zero tire comebacks since switching, and we’ve actually prevented a few potential comebacks by not installing tires that we identified in the measuring process as likely to create a vibration.

When choosing equipment capable of measuring RFV, be aware that the field is surprisingly narrow. There are two procedures used to measure RFV. One utilizes a load roller that applies 1,000-1,400 pounds of pressure against the tire tread, and using the principles of a dial indicator, it measures the RFV of the circumference of the squished tire. A separate step is required to get accurate rim measurement data. The machine performs its proprietary calculation and then displays an alignment of the rim and tire that will create the most-round assembly. Once the tire is placed onto the rim, a normal balance procedure is followed.

The second procedure uses laser technology to measure an unloaded tire assembly’s tread, sidewall and rim simultaneously. Using proprietary software, this type of machine predicts how the tire will react when loaded. The machine will then suggest an alignment of the rim and tire that should make the overall most-round assembly.

After researching the machines and talking to technicians who have been using both, I opted to go with the load-roller machine.

My decision about what to buy came down to an understanding of how a dial indicator works and how that related to my understanding of RFV. A load roller simulates the deflection a tire would receive while driving, and that makes loading the tire a critical aspect to measuring RFV. This fact indicated to me that there was really only one viable option.

Our local Hunter Engineering repairperson spent hours making sure we understood how to use our new tire equipment properly, and he’s only just a phone call away to coach us through a scenario if we haven’t seen it previously. Support like this helped boost confidence with such an ideological change. Knowing that we are putting out a premium product, superior to what many shops offer with just a spin-balance, also boosted my team’s excitement for tires.

I learned throughout my philosophical conversion that most customers choose quality over cheap, if given the opportunity and a good explanation of the benefits. Now, when someone says “tires” I no longer facepalm. I’ve converted my own personal “truth” on tires. I think this truth is better for us, and maybe it’s worth looking into at your shop?