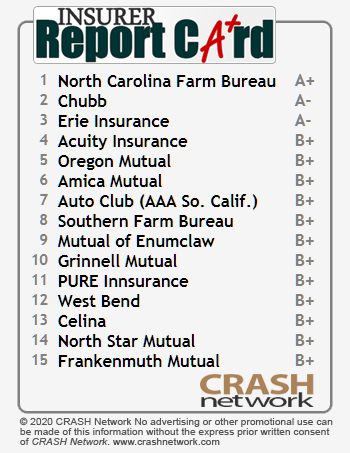 A free report with the 2020 “Insurer Report Card” findings can be downloaded by clicking HERE.

More than 1,000 individual shops around the country each graded as many as 30 different insurance companies in their state in terms of how well each company’s “policies, attitude and payment practices ensure quality repairs and customer service for motorists.” In all, the survey reported grades for 79 insurance companies.

“As drivers, most of us go years without interacting with our insurance company’s claims department, but collision repairers do that every day,” CRASH Network’s John Yoswick said. “That gives them perspective on which companies do the best job taking care of policyholders – and which ones have some room for improvement – and that information can be a valuable tool for drivers as they consider which insurer to choose.”

Interestingly, this year’s “Insurer Report Card” found that the largest insurers nationally did not receive as high of grades as many smaller and regional insurance companies.

“Many consumers won’t have seen or heard advertisement after advertisement for North Carolina Farm Bureau, Oregon Mutual or Acuity Insurance, but shops graded these companies as among the Top 5 when it comes to taking care of customers after a claim,” Yoswick said. “You have to look fairly far down the rankings before you find one of the best-known and largest auto insurers, but most consumers will find an insurer or two among the 15 highest-graded who offer auto insurance policies in their state.”

Shops participating in the Insurer Report Card used such phrases as “focused on customer satisfaction,” “wants to ensure a quality repair,” and “easy to work with” to describe the insurers who received high marks. They criticized the insurers to whom they gave lower grades using such phrases such as, “cares more about cost than quality of the repair,” “pressures us to use cheap, low-quality parts,” “slow claims process,” or “inexperienced adjusters.”

“It’s hard to get advice from friends or family about which insurance company to choose, because those people may not have had a claim recently, and if they have, they almost certainly don’t know how a different insurer would have handled that claim,” Yoswick said. “But just as medical providers see how health insurers process claims, collision repair shops interact with auto insurers on a daily basis. They know how those insurers treat vehicle owners after an accident.”

CRASH Network is an independent weekly subscription source of collision repair industry news, research and information not available anywhere else.