Did Ford Motor Co. CEO Alan Mullaly do anything to improve the serviceability of his products? 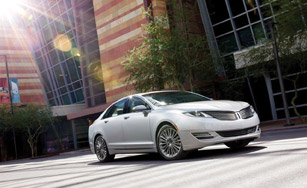 This month we will examine the Lincoln MKZ. Two years after I closed my shop to pursue my career full time in hybrid technical training, Alan Mullaly was named CEO of Ford. That was 2006. Under Mullaly’s leadership, Ford was kept out of bankruptcy court and improved its products. But did the much-improved Ford consider the working technician who has to fix their cars or do preventive maintenance?

In model year (M/Y) 2006, the Lincoln Zephyr was introduced. Initially unveiled in concept form at the 2004 New York International Auto Show as a new entry-level luxury sedan, it was intended to appeal to a younger generation of luxury car buyers. Many of the design elements of the Zephyr concept made their way into the production model. For M/Y 2007, one year after its introduction, due to its poor reception in the marketplace, the Zephyr was refreshed and renamed to follow a new nomenclature developed by Lincoln that mimics the alphanumeric naming schemes used by other luxury automakers like Mercedes-Benz. The Zephyr was renamed the MKZ. The MKZ was the first of the “MK” series of Lincoln luxury vehicles, and has since been followed by the MKX crossover, MKS full-size sedan, MKT full-size crossover and a new smaller SUV, the MKC.

A hybrid version was launched in the U.S. market in September 2010 as a M/Y 2011. The MKZ hybrid was the first hybrid vehicle in the market priced the same as the standard gasoline-engine version. As you all know, a good product with poor marketing may sit on a dealership’s lot for a long time. Pricing the hybrid the same as the non-hybrid makes the mix about 20 percent hybrid nationally and in hybrid markets, more than 50 percent. The 2014 hybrid gets 38 mpg city and one less mpg on the highway at 37, as opposed to 22 city and 33 highway for the gas car. You will see these in your shop, if you haven’t already, as the MKZ has been Lincoln’s best-selling vehicle since 2008.

The latest version includes inflatable rear seatbelts, eight airbags, hill-start assist, active park assist, lane-keeping assist, blind spot information system with cross-traffic alert, auto high beams, rain-sensing wipers, front parking aid, adaptive cruise control with collision mitigation, crash sensing system, emergency brake assist, SOS post-crash alert system, advance trac with electronic stability control, torque vectoring control, and traction control. All this and we still crash cars at an alarming rate. With a forward-facing camera and more inputs, the MKZ’s electric power steering electronic control unit (ECU) will move the steering wheel and gently nudge you back into your lane if you wander out. It makes the car safer. What will an MKZ look like in 10 to 20 years? It is a fully loaded luxury car selling for about $36K and you can option this to more than $42K pretty quickly.

Brake coach is located in the left side of the 10.1-inch gauge cluster and helps you optimize your use of the vehicle’s regenerative braking system. It also helps improve fuel economy and reduces wear on the brake pads.

The older MKZ had an updated Ford Escape hybrid system that was designed mostly by Volvo and its partners in Japan: Aisin, Sanyo, TDK and others. Now the system is an all-new version that is more “American made” than before and has separate components to cut cost when it comes time for repairs. Specifically, the inverters are no longer located in the electronic continuously variable transmission (eCVT), but are stand-alone parts much like the Toyota hybrid system. A bonus point for that move.

The MKZ hybrid’s drivetrain consisted of Ford Motor Co.’s new 2.0-litre, late intake valve closing (LIVC) four-cylinder hybrid drivetrain with lithium-ion batteries with a power-split eCVT. The “power split” allows the electric and gas engines to work together or separately to maximize efficiency. It’s the same powerplant used in the Fusion hybrid. It generates 188 combined horsepower and 129 lb.-ft of torque at 4,000 rpm.

The MKZ rides on the same platform as the 2013 Ford Fusion with an identical 112.2-inch wheelbase; however, the MKZ is 2.4 inches longer, 0.1 inches taller, and a half-inch wider than the Fusion. The 2014 MKZ is available in three different powertrains: 2.0-litre EcoBoost, 3.7-litre AWD and the 2.0-litre hybrid. You will not see a hybrid label on the outside of the car; look for 2.0H on the trunk lid. This is a much-improved car in many ways.

The first hybridized Lincoln was the M/Y 2011 MKZ. It was based on the Ford Fusion hybrid that was introduced the year before. Ford’s Fusion hybrid was an award-winning entry. The MKZ hybrid is powered by a 2.5-liter LIVC four-cylinder gasoline engine, sometimes mistakenly called an Atkinson-cycle. The transmission has two electric motors and combined, the two power plants develop 191 horsepower at 6,000 rpm and 135 lb-ft of torque at 2,250 rpm. It achieves the same impressive EPA fuel-economy ratings of 41 mpg in the city and 36 mpg on the highway. Ford, as of late, has been confusing the public with incorrect mpg ratings. Makes it tough to tune up a car and then the customer asks you why the car can’t get the mileage it was reported to achieve.

The Lincoln’s dash mimics the Fusion’s customizable instrument cluster, with its plants growing leaves as a reward for economical driving – although the Lincoln version additionally sprouts up to five lilies. Each flower is progressively harder to bloom, and they remain in the display until the fuel-economy monitor is reset. Oh, such fun! One of my colleagues drove my rental Fusion HEV like he does his muscle car and all he had were sticks showing on the screen. It does take some easy driving to get the numbers, but they are doable.

The 2011 MKZ hybrid came standard with an array of luxury features including genuine wood and leather trim and lots of safety features.

As with the standard MKZ, the hybrid’s road manners are OK. Considering its low-rolling resistance tires, the hybrid offers a surprising amount of feedback through the steering wheel. The regenerative brakes feel as natural as the non-hybrid MKZ’s braking system. The transitions between full-electric, hybrid and gas-only driving are seamless. The hybrid drives like the standard MKZ. It gave up 72 hp to the V6 model, but the hybrid’s acceleration is more than adequate. The MKZ hybrid’s solid-build quality (based on the Escape hybrid powertrain) and excellent fuel economy make it a great car your customers will like and keep for some time. That means they will expect you to service it and keep it running well.

The fact that Lincoln did charge the same $35,180 for the base MKZ hybrid as it does for the base V6 MKZ was a surprise, because it was the first company to do so. It is still their practice today. Options for the MKZ hybrid included a THX 5.1-channel surround-sound system and navigation, which were bundled with other odds and ends for $3,595 extra. If you wanted it all – every available option such as navigation, sunroof, adaptive headlamps, ambient interior lighting, blind-spot monitors, a rearview camera, rain-sensing wipers, chrome-clad wheels and more – it was about $41,000 fully loaded. A lot of car for the money. 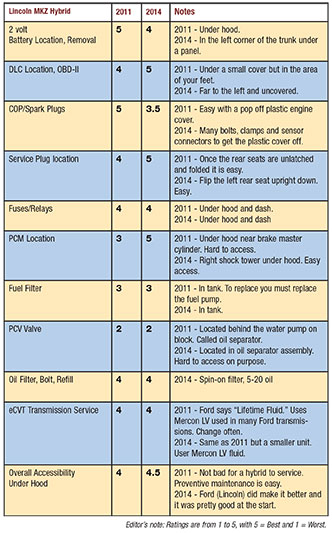 Servicing a Ford hybrid requires specialized training, safety equipment and a great scan tool. Most of you know about making the car safe to work on before dealing with the high-voltage system. One of the first steps is to remove the orange safety plug. Simple enough it seems. Just release the split rear seat backs and the service plug is looking at you, but where are the release handles for the rear seat backs? There aren’t any handles, only small pegs you can barely see located under the rear speakers in the trunk. Use a strong flashlight and after the rear fiber panel is removed, you will – on close examination – see the hidden latch pins. After that, it gets easy.

The internal combustion engine (ICE) is easy to service, as is most everything else. One area I think is worth servicing more frequently is the eCVT fluid. The electric motors are cooled by the ATF and that can become slightly abrasive over time, so fresh fluid every few years or 60,000 miles (could be less) is our recommended procedure. Motor windings can be affected by contaminated fluid. Moisture is also an issue in the eCVT fluid as well. If you are a hybrid technician, you will enjoy the ease of service on this car. It has also been one of the more reliable hybrids in the marketplace.
Summary

The new MKZ, as you would expect, got easier in some areas to service and harder in others. On the 2014, the ECU or PCM is out in the open. High Voltage Service Disconnect Plug is much easier to get to. DLC in a better spot so it does not interfere with your feet when driving with a cabled scan tool. On the down side, the plastic cover removal to get to spark plugs, coils and more now includes bolts and clamps. The 2011 cover was simple, just “yank it off.” But really, most of the service did get better. See the chart for more information.