Makeover of a Plug-In

Redesigned Chevy Volt undergoes inspection. Is the second generation better than the first?

There have been no redesigns of any plug-in cars except the Chevy Volt. The Nissan Leaf did get a larger capacity battery pack and the motor/inverter underwent changes, but the body and chassis stayed the same. Tesla has new models but not a new makeover. So why did General Motors change everything? Let’s revisit the decade at GM.

In 2007, GM announced the Volt as a concept at the Detroit Auto Show. GM was in serious financial trouble, and our economy was about to implode. It was during this time that GM had to pour hundreds of millions of dollars into the Voltec driveline, while building a new car. In December 2010, the Volt rolled off the assembly line on schedule, and more than 100,000 Volts have been sold worldwide since then.

The Volt’s transmission started out as a two-mode for the Saturn Vue, but it never went into production. The internal combustion engine (ICE) was brought over from Europe’s Opel division, the chassis had many shared parts with the Cruise and the electric cabin-heating system came off the shelf from a German company.

It’s amazing that the Volt got made at all. Now GM has put a woman in charge, Mary Barra, and the car company is doing much better. The first woman to ever run a major car company is making sure GM makes money and better products. The Volt was, and still is, part of this success story.

In 2010, General Motors offered (in a few states) what would become a new idea. The concept was simple: sell a pure-electric car with a range of 35 to 40 miles so commuters with an average drive to work could get there without burning any fossil fuels.

On longer trips, after the high-voltage pack was depleted (about 20 percent state of charge [SOC]), a small gas engine would start automatically and keep the battery at about 20 percent SOC so you could continue to drive on electricity until a charging station could be found to recharge the lithium-ion cells.

The Volt did exactly that until the BMW i3-Rex, which is for sale now, and Prius Prime, which comes out later this year, saw the wisdom in the GM concept. Expect more electric cars with range extender (EV-RE) in the future from other OEMs.

I make a distinction between an EV-RE and a plug-in hybrid electric vehicle (PHEV). The former has a powerful enough electric drive motor so that the ICE can stay off while at full acceleration, and the PHEV relies on the ICE to add power to the wheels when needed. So if your aim is to use as little gas as possible, an EV-RE beats the PHEV.

The 2011 Volt has had some tweaks along the way, but the big change came in model year (M/Y) 2016. The 2011 Volt was rated at 95 mpg city and 90 mpg highway in the electric mode, known as miles per gallon equivalent (MPGe) and 37 mpg if you never plugged it in. The basic warranty was three years, or 36,000 miles with a five-year or 100,000-mile powertrain. A longer warranty was provided for some electric drive parts.

The curb weight of the vehicle was 3,781 pounds, and the high-voltage pack and support systems were close to 600 pounds. The ICE was a 1.4-liter, basic twin-cam unit sourced from Europe, and the electric drive system produced 111 kilowatts, or 149 horsepower. This is a very interesting driveline to study.

Did you know that our country produces the top three best-selling electric cars in the world? They are made in the United States, and two of them were designed here. The sheer amount of engineering we have is huge. The three cars are Tesla, designed and built in California; the Nissan Leaf, built in Tennessee; and the Volt designed and built in Michigan.

In Holland, Mich., battery technology is undergoing a revolution and many great jobs have been created there. As Americans, we should be proud of this not-so-well-known fact.

The new Volt is better in every way than the 2011 model. One of ACDC’s Canadian trainers, Yves Racette, drives a 2016 Volt, so we compared cars recently. Yves also drove a 2013, until he traded up. The new Volt’s all-electric range is now 53 miles (compared to the old car’s 38), and with a full charge and full tank of gas, the car can go about 420 miles. The 1.5-liter, four-cylinder engine is new, as well as smaller and lighter than the outgoing car’s four cylinder, with total power unit weight down 100 pounds. Weight is important because any car benefits from less weight, and the new Volt accelerates to 60 mph in 8.4 seconds.

The new Volt sells for a base price of $33,170. In Massachusetts, where I live, the state will send you a check for $2,500 after you buy a new one, and the federal government will knock $7,500 off what you paid in taxes. For my neighbors, that’s a tad more than $23,000. Of course, you can add options and spend more. The Volt seats five now; the older one had just four bucket seats.

John Volcker, editor of Green Car Reports, is a big fan of the redesigned second-generation Chevy Volt, and his website gave the car its 2016 “Best Car to Buy” award. I met with John at the New York City Auto Show in March 2016 to exchange ideas about how the electric vehicle market is doing. Turns out, we’re both optimistic.

The newly designed 18.4 kilowatt-hour battery is similar to the previous one, but now two larger lithium-ion cells do the work of three smaller ones. This small tweak saves space and money. The 1.5-liter ICE was purpose-built and gets 42 mpg, but almost everyone who owns a Volt plugs it in every night, and their commute is usually less than 40 miles per day. Many owners can charge at work, so gasoline is rarely used. If one was driven 100 to 150 miles a day and had no time to recharge, then a Prius might be a better choice. People tend to buy cars that fit their lives and not the other way around.

Recall No. 15V145000 was the only one for a 2011 Volt, and it was to keep absent-minded owners safe from themselves. A software update shuts the ICE off if you forget to when you exit the car. Really? I was a shop owner for 25 years, so that doesn’t surprise me. 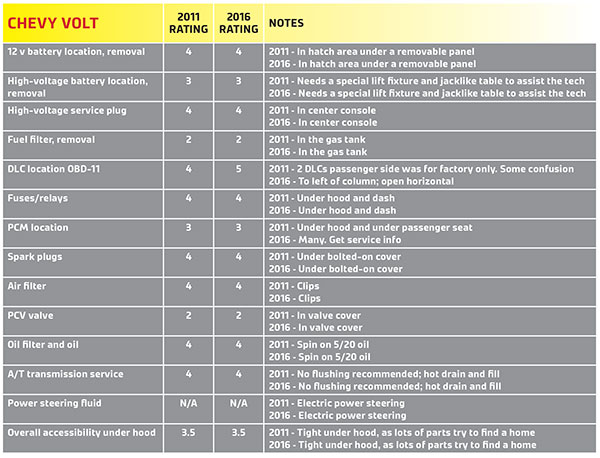 The new Volt isn’t any harder to service than the older one. Most of the serviceable items are relatively easy to get to, but if you were not trained in high-voltage systems, it would be intimidating. GM is making better vehicles than they did 10 years ago, so there is less to do.

One weird thing: To know when to replace the spark plugs, you’ll need to ask the owner for their password for www.myvolt.com. There, and only there, will you get a breakdown of gas vs. EV miles.