Chasing down the cause of an underperforming blower motor sheds light on a solution that saves time and money. 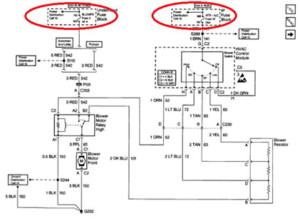 Using a wire diagram is better than just looking at the fuse panel. With a diagram, you can determine how a system works and which ground and power sources are associated with a component. In this case, there was a fuse the vehicle owner and previous shop didn’t know were associated with the system.

We’ve all seen them. Those do-it-yourselfers who decide to install their own part on their vehicle. Hey, it’s America, so why shouldn’t someone be able to install parts on their own vehicle? As hard as it is, I try not to judge when we encounter a scenario where someone made their own life a little more frustrating. It’s just another diagnosis, business as usual.

I received a phone call from a vehicle owner whose Suburban wasn’t blowing air out of the HVAC vents unless the vehicle was driving down the road. The weather was changing to colder, and he was concerned about keeping his windshield defrosted. He informed us that he replaced the blower motor resistor and the blower motor, and he was certain the fuse was good.

Whenever a customer tells me they are 100 percent confident that a fuse is good, it’s generally the first thing I check because more than half the time the fuse is blown. I’m sure your experience here is similar. The vehicle owner also informed me that he had taken it to another shop, and after a few days they informed him it needed an HVAC control unit. 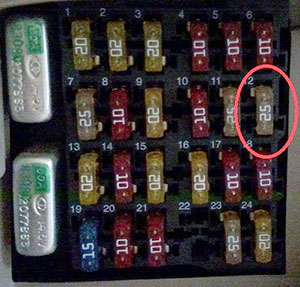 It never fails. Whenever a customer adamantly says they checked all the fuses so it “couldn’t be a blown fuse,” it always ends up being a blown fuse. In this case, fuse No. 12, in the instrument panel fuse block, had failed.

The 1999 Suburban was dropped off, and we were able to verify that the blower motor was inoperable. So were the rest of the HVAC components such as the actuator doors and the control panel. Checking the wire diagram revealed two fuses related to the blower.

The first fuse was the primary power feed that supplies the high-speed circuit of the blower relay. This one was located in the under-hood power distribution center (PDC) and was clearly marked BLOWER. The second fuse is used to power the HVAC control module, and subsequently powers lower-speed operation of the blower. Fuse No. 12, which powers the HVAC control module, is marked HTR-AC. This second fuse is located in the instrument panel’s fuse box. Visual inspection proved this fuse was blown, and adding a fused load device proved that we had a dead short to ground within the circuit.

Standard operating procedure for chasing down a short to ground is to install a 12-volt light, with an external fuse in line, in place of the blown fuse. The light will illuminate until the short is removed, which gives a great visual indicator that we have located the problem. In this case, I plugged my 12-volt light into the No. 12 fuse cavity, and it illuminated immediately. Already, I knew the issue was downstream of the fuse and not a voltage supply issue to the fuse. 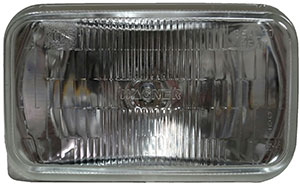 A standard headlamp bulb, wired in series with a fuse, will serve as a great visual aid in locating a short to ground. It also doubles as a load device for load-testing circuits. Email me if you would like to know more.

When chasing a short to ground, I like to cut the circuit in half as much as possible. I also like to take the easiest path whenever possible. Looking at our wiring diagram, our trouble lies on circuit No. 141. This circuit starts at the I/P fuse block, intersects with splice S268 and terminates at the HVAC control module. Splice S268 heads over to supply three HVAC door actuators. Our options for where the short was located were limited to four components or a chaffed wire harness.

At this point, we were about 15 to 20 minutes into our testing session. Looking at our ALLDATA service information, I thought that accessing the door motors would be a chore. Basically, we could pull the HVAC module easily, but any further disassembly was going to require a significant financial commitment from the customer. I decided that we had enough testing time left to remove the HVAC Control Module.

Off came the trim bezel, and out came the HVAC control unit. The previously installed test lamp turned off. We were on the right track.

We installed a new fuse, which did not fail, and HAVC operation returned, including all blower speeds. Careful inspection of the cavity where the HVAC control module was mounted found an aftermarket device had been plugged into the radio antennae. The aftermarket portion had an exposed metal housing that was dragging against the HVAC control module circuit board and shorting out the circuit.

After sheathing the exposed connection, the vehicle was reassembled and taken for a quality-control test drive with positive results. The vehicle owner was in total disbelief that there was a second fuse, but he seemed grateful that the dash didn’t need to come out to chase down a chaffed wire.

Our total vested time was roughly 30 minutes. Looking at our wire diagram made it easy to formulate a diagnostic approach based on how the system is put together. I suspect the vehicle owner and previous shop misread the fuse in the I/P fuse block and didn’t realize it was related to the blower motor. Had they taken a couple of minutes to review a wire diagram, they would have seen that power to this fuse is absolutely critical to blower motor operation. 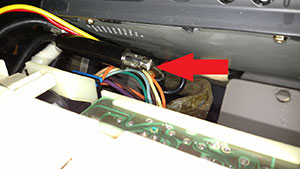 Amazingly, this fix required no parts. Disassembly found the metal part of this antennae adapter was shorting on the exposed HVAC circuit board. As soon as the antennae wire was moved, the short disappeared and normal HVAC operation resumed.

Of course, the vehicle’s owner had spent more money on unnecessary parts and diagnosis than we charged him to diagnose and fix the issue. Fortunately, we still made money on the endeavor. It’s rare that we work for diagnosis-only, anyway, so every once in a while, it’s no big deal.