The first shop gave up. So did the second, third and fourth. So what did we say when it wound up in our shop? Bring it on. 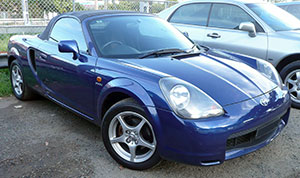 A sporty little MR2 like this showed up at our shop with a host of problems. Careful planning and following our diagnostic procedures would be key to creating a repair plan for this “basket case.”

You don’t need to have been a shop owner long before you encounter your first “basket case.” Urbandictionary.com defines basket case as a situation that has no solution. In the car world, it’s usually acceptable to assign this moniker to a vehicle that has a mishmash of parts or problems or shows up in a state of disassembly.

Each shop will have its own take on basket cases. Some won’t touch them with a 10-foot pole, usually because they learned from a bad experience that things can go south in a hurry. Some shops will take them on as long-term side projects, using the car as filler work when work slows down. In my shop, we advertise for them and approach them as a normal job, often using them to hone our diagnostic skills.

We received an email inquiry from a local guy with a 2000 Toyota MR2. He explained to us that an engine upgrade started three years ago had cost him about $5,700 over the course of four shops. At that time, the car was not drivable, and it was two years overdue for a Delaware emissions inspection. 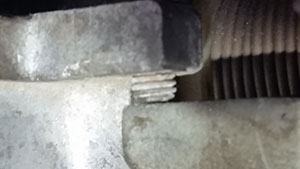 The throttle stop was found backed off to the point that it no longer influenced minimum airflow.

The guy said the saga started with what he expected to be a straightforward engine swap, which included installing a similar, but not identical, size engine from a Celica GTS into his MR2 to replace a failed stock engine. Reports on Internet enthusiast forums indicated this was a plug-and-play swap that required an ECM jumper harness.

The first shop gave up halfway through the job. The second one got the engine running, which made the car kind of drivable, but didn’t want to go any further. The third, according to the customer, made the engine run worse while trying to solve an emissions problem. And the fourth was actually a mobile diagnostic tech guy who reached the conclusion that the car was unfixable.

A relative compression test is a fast and accurate way to separate causes of a misfire into two categories, mechanical or non-mechanical.

A history like that would make most normal folks run from the job. For me, though, a story like that is music to my ears. Not being able to resist a challenge – and because I’m crazy – I accepted the car for a one-hour evaluation. I explained to the customer that the hour was for us to decide if it could be diagnosed. The customer agreed, and the car showed up two weeks later on a rollback.

Our initial check found a Toyota Celica GTS engine and transmission that looked at home in the engine bay. When started, the engine revved to a high idle, calming to a relatively normal idle after about 10 minutes. Having years of experience with engine swaps and modifications, I knew we needed to use our scan tool, as if the car were the Celica GTS and the wire harness was mostly the MR2. The only non-stock GTS parts appeared to be an exhaust header and an aftermarket mass air-flow (MAF) housing.

We quickly determined there were three or four individual issues at play. Codes :

It took all of five minutes of testing to determine the P0141 code indicated we had a dead heater in the O2 and that the rest of the circuit was fully functioning. We were unable to verify any current misfiring, so we ignored that for the time being. Watching our fuel trims, we thought we had a metered-air issue. It looked as if more air was passing into the engine than it was measuring. We also noticed the throttle felt sticky when transitioning off idle. We found no external vacuum leaks and thought the next step was to remove the throttle body and see.

We informed the customer of our findings and suggested installing the O2 sensor and removing the throttle body for a hands-on inspection in the hope that something would jibe with our scan data. He authorized us to proceed.

Testing injector flow, without removing the injectors, saves time in identifying good and bad injectors. In our shop, we use a General Motors AFIT and have modified it to work with other brands of vehicles.

The O2 fixed the heater issue. When we removed the throttle body, we found it had been improperly adjusted (remember when that used to be a thing?). The blade stop was no longer touching the adjustment screw, so the blade was resting on the housing, eliminating the throttle’s minimum airflow and sticking against the housing during off-idle transition. We adjusted the screw per Toyota’s specification and reassembled. Subsequent starts found a normal cold start idle, a discernable misfire and our fuel trims were still out of whack. Two issues resolved, two to go.

Our customer authorized us to proceed with misfire testing, which we believed should include injector flow testing. We had already identified the misfire as cylinder No. 1, and a relative compression test proved the issue wasn’t mechanical. Because of the lean code, we thought maybe we had a lean misfire on cylinder No. 1, possibly a victim of injector-flow problems caused by gummed-up injectors that had been sitting for a while with old gas in them. We hooked up our active fuel injector tester (AFIT) and were surprised to see all the injectors within 2 percent flow of one another. We were expecting to see one at 6 percent or higher flow difference.

We removed our AFIT and the cylinder No. 1 coil. After installing a jumper harness, we measured our ignition but found the miss had been resolved. We carefully inspected the plug and coil boot, but found no traces of carbon tracking or voltage leakage. We reassembled, and the misfire stayed resolved. This was a little frustrating. There are a few plausible explanations to explain what happened, but because the misfire never returned there was no further action for us to take.

Last issue! By that point, we had an ecstatic customer and a car that was running pretty darn well. Our fuel trims would max at +30 at idle and drop to +20s at high rpm. The mass airflow (MAF) sensor was responding normally, and our O2s were happy. Similar to a vacuum leak, but we didn’t think it was due to the idle being normal and trims only correcting some at high rpm.

The customer’s three-year odyssey was over. We informed him that the misfire may or may not return, but if it did, we’d be happy to address it. He paid his hefty bill and called a few days after picking up the car to say thank you and tell us the car had never run so well. Pretty satisfying on our end!

I think many shops would run from a basket case like this, and rightfully so. But by keeping a simple diagnostic approach, sticking to our game plan and keeping the customer informed at every step, we were able to profitably bring this case to a successful close without any hiccups or heartburn.