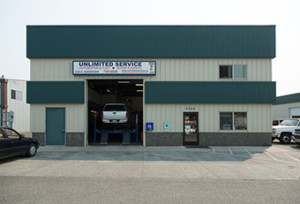 Ask Todd Black what’s the most important thing he’s learned in the automotive service repair business, and you’ll quickly discover a lot about his philosophy for success. He makes no bones about the value of thinking ahead.

“It’s easy to get caught up in the day-to-day activities of the business,” he explains. “But planning must occur to ensure the resources are available to invest in equipment and our employees to provide for the next generation, in ownership, operation and technicians.”

Maybe that’s why his wife, Janel, co-owner of the couple’s shops, Unlimited Service in Bellingham, Wash., describes him as a “dreamer.” “Todd loves to dream about future technologies and the challenges they will bring,” she says. “Where will your shop be in 20 years? I’m already dreaming about mine!”

The Blacks currently run two locations in Bellingham – a 5,000-square-foot repair facility on Bakerview Road and a much larger (16,000 square foot) repair shop and wholesale parts store on Forest Street.

That habit of thinking ahead extends to their policy of treating customers like family, offering quality repairs “without breaking the bank” and prioritizing work as needed. “Like repairing hybrid batteries, rather than just replacing them,” Todd says. “This is a much better value for the customer.”

Blessed with a strong mechanical aptitude, Todd studied mechanical engineering at Montana State University but transferred to Bellingham Technical College after one year to complete a two-year program in automotive maintenance. He started his first business from a small shop at home and did a lot of mobile work for a few years to get established. After acquiring the first location, he was able to start hiring employees, and 10 years later purchased the second facility. 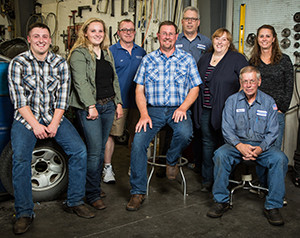 Today, he’s an ASE certified Master Technician, with extensive experience serving with the Automotive Service Association’s (ASA) ASA Northwest affiliate. In fact, according to Jeff Lovell, executive director of ASA Northwest, both Todd and Janel are very active members of ASA Northwest and have been for many years.

“Janel has been on the Ascettes board for many years and has actively supported the scholarship fundraisers at retreats. Todd and Janel attend most all of the ASA Northwest events and are valued members of ASA Northwest.”

Todd is also a current a member of ASA-National’s Mechanical Operations Committee, where he’s had a ringside seat for viewing the explosive changes that have shaken the industry over the past decade. These changes, he says, include the shortage of technicians, the continuing evolution of new technologies and the advent of autonomous and semi-autonomous vehicles.

“We’ve been active in ASA to keep abreast of programs and apprenticeship ideas,” he says. “We’ve also focused a portion of our training dollars on development of the hybrid battery rejuvenation market, as well as continued to provide access to training equipment to all of our employees to keep our knowledge, tools and equipment current. 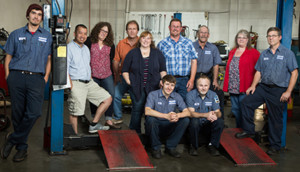 Todd’s forward thinking also applies to his efforts to rise above his competition. “We stand out because of the variety of services we’re able to provide our customers,” he says. “The skill sets of our technicians encompass the new hybrid technology and other technical diagnostic services, as well as diesel and fleet repair capabilities.”

Todd knows that plenty of challenges lay ahead, but that’s why he still has his passion for the industry. “The best thing is the challenge and the variety of problems and solutions that come into the shop each day,” he says.

“While the principles of the internal combustion engine are constant, the variety of repairs is extensive. This keeps the minds of the technicians and service writers active and engaged.”

It’s obvious that the future is still out there for both Todd and Janel and – no surprise – they’re still making plans.

“Succession planning,” he explains, “to prepare for the next generation. Also, we hope to participate in the proposed apprenticeship program through ASA. We’ve had some discussions about a third location and expansion of our parts division, and we’re awaiting the right opportunity to make this happen.”