For the Love of Hybrids & SUVs

EDITOR’S NOTE: Two technicians – Isaac Rodell and Johnathan Dickerman – were interviewed for this article. We appreciate their input.

Time has proven that American drivers love SUVs. But do technicians who have to fix them feel the same way?

If you are working anywhere in the USA, you can’t avoid fixing and maintaining small and large SUVs.

We will examine the Lexus luxury sport utility vehicles that started it all. It has been redesigned a few times over its 20-year run. The latest version will be compared to the older models, and this time we will concentrate on the hybrid version.

As you may know it was model year (M/Y) 2006, when the RX400h came from Japan to our shores. They looked the same on the outside as the RX350, but under the hood and

The big difference was how much it cost to refuel and that caught on. This comparison isn’t about cup holders, sound systems, and connectivity or color options. It is about serviceability.

Can you make sense of how it was constructed? Can you access what you regularity work on? Did the engineers think about “you” in the re-design of this SUV?

Most of you know that I own a company that teaches technicians and others how to fix hybrids, so I will try to be objective.

The RX has never gone out of style, but with global warming becoming more well know and fuel economy tied into the reasons for our heating planet, getting better miles per gallon was also required if a well-to-do person was to be taken seriously in their global awareness.

The RX400h (small “h” for hybrid) was the answer. Now you could drive green, have all the luxury you want and save the planet too! Instant winner. I am lucky enough to travel to Europe every September to teach hybrid technology overseas.

Did you know that in the land of diesels one out of every two RX models is a hybrid? Yes, this is a one popular Lexus. But, do the technicians that have to service and repair them love it?

We will examine the entire series and find out. These mid-sized SUVs are everywhere, and you will surely work on them if you haven’t already. 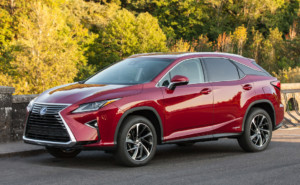 After the RX400h came the RX450h. The hybrid system had four modes of operation: low-speed pure EV, Normal, Eco and Sport. The RX 450h can operate in electric-only or gas-engine-only modes, as well as a combination of both.

Then when you look under the hood, you will see a typical Toyota hybrid system and a lot of plastic covers. It uses Toyota’s Hybrid Synergy Drive (HSD), but it’s called Lexus Hybrid Drive (LHD) – not Lexus Synergy Drive. LSD is unfortunate initials, except for old hippies.

Today most hybrids use L.I.V.C. (late intake valve closing) – sometimes referred to as Atkinson Cycle – that improves miles per gallon but reduces torque. A 3.5-liter V6 is mated to a 116-kilowatt electric motor (just got that lost torque back) that adds up to a 295 total system horsepower with lots of low-end torque. Add AWD and you have an “all weather SUV” model that has an additional 50-kw motor in the rear that helps in slippery conditions and makes it faster than the front-wheel-drive models.

Tesla also sells all-wheel-drive EVs, which use a front and rear motor, but the idea of Tesla AWD system isn’t original, as Lexus has had something like it for years, as has the Toyota Highlander Hybrid. The all-wheel-drive RX 450h adds a third, rear-mounted motor generator (MGR) to drive the rear wheels, eliminating the need for power-transfer gearing or a driveshaft from the front. The hybrid system electronically varies front and rear torque distribution depending on traction conditions. A new two-step flywheel damper absorbs small torque fluctuations and also the minor vibration produced when the gasoline engine starts and stops. A SNOW mode slows accelerator-pedal response to help reduce the possibility of wheel spin.

There is no mechanical driveshaft between front and rear and nothing for the RX driver to do to engage rear-wheel drive. That makes the RX450h ill suited for off-roading, but that was never the intention. An interesting note is that the CVT is no longer water cooled (the inverter still is), as the CVT is now oil cooled so look for another oil cooler, much like a conventional A/T.

Power is routed to the RX’s front-wheel drive system by a planetary-type continuously variable transmission (CVT). A 288-volt nickel metal hydride (Ni-MH) battery pack under the second-row seats stores recycled energy from the braking system or when the ICE drives a high-voltage generator.

Why is the Lexus RX their best seller? Because it has features that drivers want. Good power, good fuel economy (for a SUV), a good ride, and reasonable handling. Zero to 60 mph (if they have electric AWD) is done in 6.7 seconds. The quarter-mile is completed in 14.9 seconds. The RX 450h is fast for its class.

There are two sets of tires available, the taller 235/60R18 tires or 235/55R19 tires on two optional alloy wheel packages combined with sufficient suspension travel make soaking bumps easy. Handling potholes and bad roads in built into the design. There is a button for “Sport” mode, but even a torquey gas-electric powertrain with a CVT in a vehicle that is almost 5,000 pounds (with driver and luggage) makes using that seem pointless.

Toyota/Lexus recommends their “World Standard Automatic Transmission Fluid” be used as long as it is in sealed containers as the fluid will absorb moisture on humid days, but the recommended interval for replacing the CVT is never. That’s right, lifetime fluid. Not a good idea as moisture-laden CVT fluid can contribute to high voltage leak problems. Suggest to your customers a CVT fluid replacement at 60,000 miles or four years.

The external difference between the new RX 450h and the M/Y 2010 RX450h is significant with the addition of a large grille below the front bumper. Because the two models look so different, one might think the driveline would have been updated, but there are no major changes now for nine years.

Here are some tech tips to remember. The 12-volt battery has a vent tube and is located in the left rear of the vehicle. One might assume it was an absorbed glass mat type (AGM) as that is what the Prius used for years, but look carefully and it is a flooded lead acid 12 volt.

If you have to dig into the high-voltage battery, one would imagine a lithium-based cell system, but again it is the same design since 2006. What is clear is that the decade old system was good enough and Toyota makes money on using the system over and over. In fact the price difference between the new models gas vs. hybrid is only $1,400. You can save that much in two years on fuel alone.

Hybrids are mainstream and reliable. For the well-trained technician, it is just another motor vehicle. 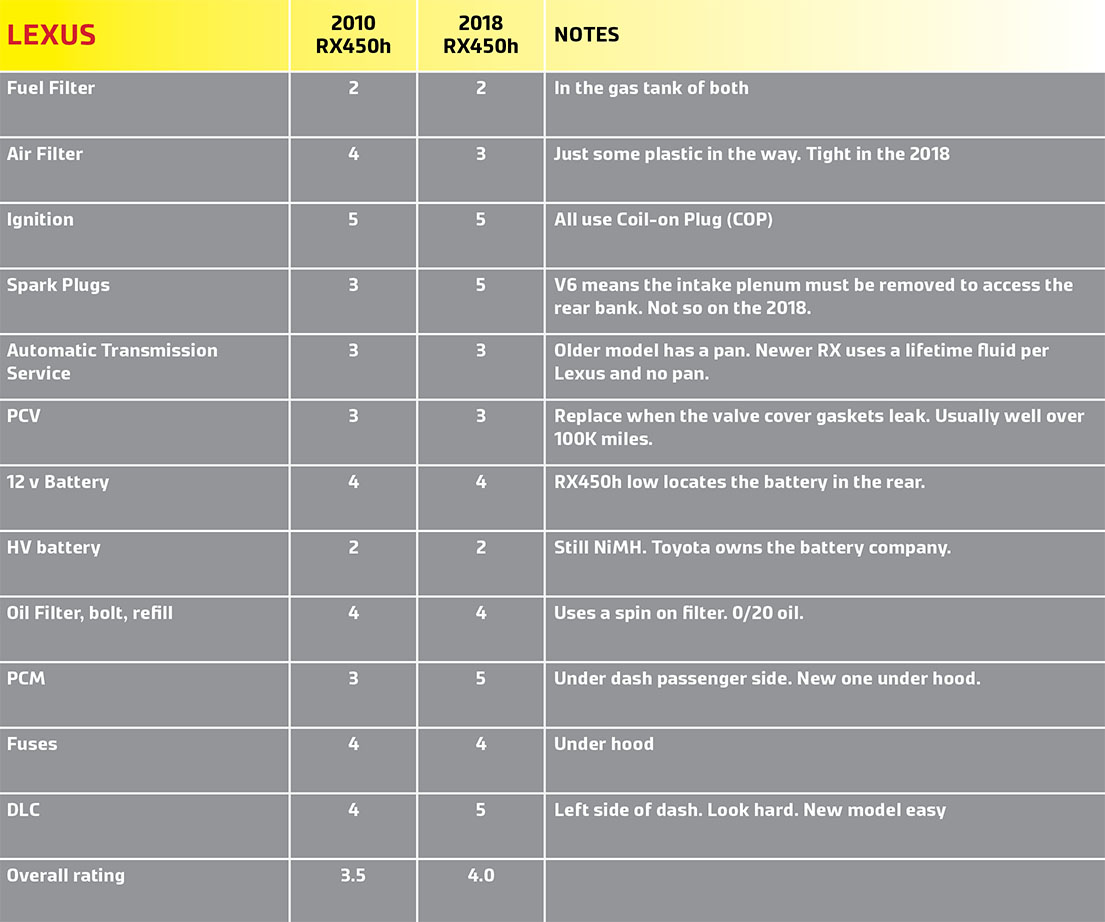