When fuses get “smoked,” don’t go bonkers. Instead, do a deep diagnostic dig.

With vehicles staying on the roads longer than ever before, we’re seeing more age-related issues with our customers’ cars. With age comes the increasing probability for human intervention in the form of aftermarket alarms, stereos and exterior lighting. A recent multi-hour, hide-and-seek experience with a 1992 Acura Vigor simply underscored this fact. 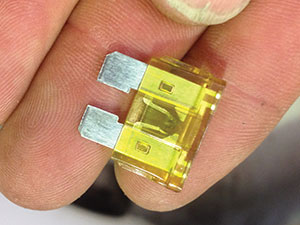 My customer delivered his vehicle with a pile of “smoked” 20-amp fuses (Figure 1) on the passenger seat, and the concern that he had to keep replacing them. And when they smoked, he lost his dash lamps and his exterior running lights. He had been visiting the under-hood fuse block (Figure 2) frequently (sometimes once a day), and other times several days would pass without incident. Without any apparent correlated event, fuse No. 19 would blow, killing dash lights and taillights. 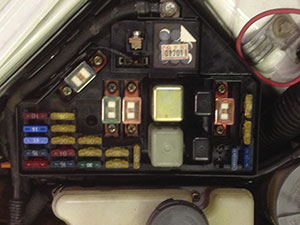 Scanning information services for technical service bulletins did not reveal any pattern-case failures. An old friend of mine, Gary, would say, “Searching for an intermittent short is like digging a well. You’re never certain exactly when you’ll find the root cause – or hit water – until you’re there.” Gary would even sell an hour of diagnostic time to begin digging, and then update as we went along, much as we do today.

My customer found that fuse No. 19 in the under-hood fuse block was the repeat offender and kept a fresh supply on hand. When I pulled the wiring diagram (Figure 3) to trace the branches, I found that this fuse supplied power for the taillight relay contact points. The short could live in any of these branches, which run the entire length of the car. 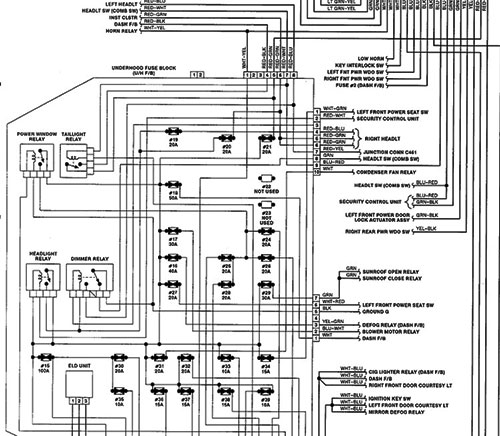 At this point, I ran my usual checklist, including a thorough visual inspection for two of a technician’s enemies: do-it-yourselfers and bunnies. Right away, I found a huge aftermarket B+ cable snaking away from the battery and into the firewall. Yes, there was a subwoofer in the trunk that led me to the discovery of an aftermarket stereo as well. I took note. 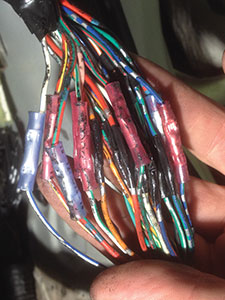 Figure 4: Appearance of entire wire under passenger side “B” pillar.

The next logical step in “digging this well” was to operate the suspect circuit with a new fuse and begin what Ford calls the “wiggle test.” I carefully began putting slight stress on the branches of wire and related connectors to see if I could pop the fuse. I operated all the lighting on the circuit and stressed their switches. You know the result: The fuse remained intact. I wiggled under the hood and under the dash, and I uncovered and wiggled related harnesses in the trunk. No luck.

As the hole for my well deepened, I began driving the car over gravel roads and railroad crossings, all in an effort to get hot copper to touch ground. No luck, again.

There was still one technician’s nemesis that I hadn’t investigated: bunnies. I shifted my focus to a search for fur, evidence of chewing or signs of nesting. Although I saw a bit of fur around the intake manifold, I didn’t see any signs of rabbit or rodent erosion.

Out of sheer determination, I kept drilling – knowing that I’d hit “water” soon. I unbolted the under-hood fuse box and began tracing the wires away from it, all the while looking for bare wires. I began uncovering harnesses that were hidden by interior panels. I followed bundles of harness through the firewall and into the passenger compartment.

During my drilling, I removed the right front kick panel and discovered the taped and butt-connected marvel in Figure 4. “Aha!” I thought. “This must be the root cause.” The trouble was that even though the repair smacked of meddling bunnies that had made a snack out of copper, I couldn’t find any exposed parts of this repair. I kept digging but also kept one eye on this mess the entire time.

I began looking for more repairs like that, hoping for some exposed wire. I decided to pull the aftermarket radio from its nesting place, and discovered what you see in Figure 5: a stripped and exposed wire. 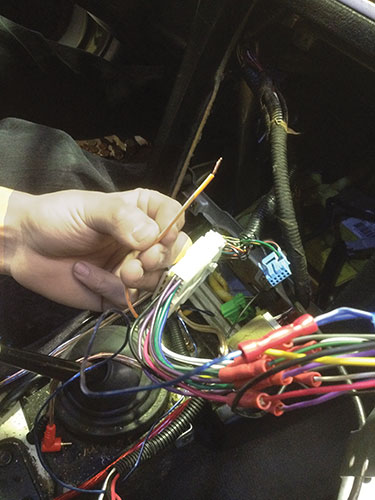 Was this the culprit? I checked the wire color against the schematic for verification, and it was, indeed, powered by the taillight relay. Just for fun, I touched it to the nearest bare bracket so I could experience the satisfaction of hearing the “Snap!” from the fuse. I was convinced I’d drilled deep enough, and I made the repair for my customer and reassembled.

In a world where vehicles are on the road an average of 11.4 years, I know we’re going to see more aftermarket intervention, rabbit erosion and just flat-out failed ignition switches that drive all of us bonkers. The trick is to develop the most efficient well-drilling process that we can, and make certain that we can earn a reasonable fee for every foot we uncover until we hit “water.”

Brian Manley is a vocational automotive instructor for the Cherry Creek school district in Aurora, Colo. He is an ASE Master and L-1 certified technician and a member of the National Automotive Technicians Education Foundation (NATEF) as an automotive Evaluation Team Leader (ETL). You can contact him at manley_brian@hotmail.com