With changes taking place so quickly in the collision repair industry, here’s how estimators can learn to improve their current processes to write it right.

Start a discussion about the process of creating an estimate in the collision repair industry, and you’re likely to find differing opinions – even among seasoned professionals.

Estimates generally bring three parties together: the consumer, collision repair shop and insurance company. It’s unusual for all three parties to agree on how to accomplish their goal: sending the customer home in a safe vehicle. So, an estimate is an attempt to get everyone on the same page from the start.

However, even among collision shops, the estimation process and the resulting estimates can vary widely. Experts who teach estimation in the collision repair industry are convinced that there’s a more efficient way to create estimates, even if they don’t all use the same techniques.

According to Mike Anderson, owner of CollisionAdvice Consulting, there are several issues with the way most estimators currently write estimates. “One of the things that I see is that estimators say they don’t have enough time to write a complete or accurate estimate,” Anderson said during a panel discussion at last year’s International Autobody Congress & Exposition (NACE) conference. Writing a complete estimate takes time, but taking the time to do it right is more likely to result in an accurate estimate, too.

The best process for writing an accurate estimate, however, is a debatable topic. “There are some [basic] industry standards set forth by the Collision Industry Conference (CIC) … they are very generic,” Anderson says. The CIC guidelines don’t outline any specific techniques regarding how to create an estimate, but they do state that an estimate should include a completion date.

According to Anderson, “Truly, a repair plan should be written after the vehicle has been disassembled 100 percent, all parts have been researched [for] pricing and availability and all vehicle pre-scans and pre-pulls have been completed.”

Larry Montanez, a collision damage analyst at P&L Consultants LLC, adds, “Pre-measuring [should also be] completed, and OEM repair procedures [should be] referenced.”

But which repair manuals are used, how parts and damage are measured and other specifics also vary widely. OEM repair manuals aren’t consistent either, and they’re updated constantly. But so is the technology that’s used to build modern-day automobiles.

During a panel discussion in August at NACE about the need for pre- and post-repair vehicle scans, Anderson noted, “From a collision repair perspective, we need some kind of standardization of the OEM repair information.”

A right way and a wrong way?

Although experts don’t always agree on the current problems in the estimating process, there are some commonalities when it comes to writing a great estimate. The most basic purpose of an estimate is to write down, based on a thorough inspection of the vehicle, what can be repaired, what should be replaced and the total estimated cost. 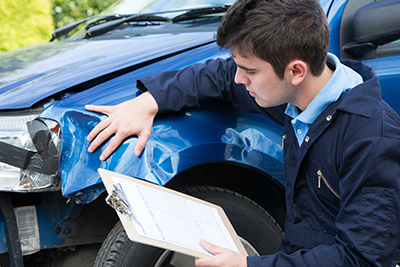 After an estimate has been drawn up, the insurance company, customer and repair shop should be on the same page, and they can decide whether to move on with the repair, or if the car should be totaled. Key steps in the estimation process include using technology that’s available, taking the time to focus on high-quality service rather than pushing through as many vehicles as possible, deconstructing the vehicle to find hidden damage and using the OEM repair information.

According to Paul Gage, director of Transportation Services Technologies at Fayetteville Technical Community College, “Estimators need to use all aspects of the estimating database, including footnotes, headnotes and P-Pages. Then, they need to access manufacturer repair procedures and information from a scan tool.”

“I agree 100 percent,” Montanez says. “But post-scanning should only be performed by the OEM dealer. Additionally, … premeasuring the vehicle [is necessary].”

Several estimating experts agree on the basic structure of an estimating process, but there are a few specifics along the way that can change, and, to some, these are a big deal. Whether or not it’s necessary to scan the vehicle before and after repairs is a recent hot topic in the industry.

With the addition of computers to vehicles in recent decades, especially to safety features, there are many small, technical pieces that can break easily. But what if there is no obvious damage to these pieces? Scanning is a one-time, time-consuming part of the process that requires an expensive scan tool. Who is responsible for paying for these procedures? Are they necessary for the safety of the vehicle?

“While insurers have no right to tell a shop how to fix a vehicle or how much it should cost,” Gage says, “they do have a fiduciary responsibility to their policyholders to use their money correctly in settling claims.”

Ultimately, each estimate is unique to the vehicle and the damage that was caused.

One of the reasons for the differences among estimating procedures is the variety of training methods. According to Montanez, “Estimates, or damage reports, are basically incomplete, incorrect or otherwise defective 90 percent of the time. Why? [Because] most of the time it’s due to poor training [or] lack of repair knowledge.”

Anderson adds that, “Most estimators are taught by another estimator in their shop. There are a variety of classes – and, obviously, I teach classes and so does Larry
Montanez – so there are a lot of options.”

Training programs may exist, but they aren’t required. Estimating experts are ready for a change, though. Gage says, “Through the work that Mike [and I] are doing, we’re trying to create a new breed of estimator.”

The industry is changing quickly as vehicle technology is rapidly advancing, so it’s possible that the estimating process simply hasn’t caught up yet. There are, however, many tools available to estimators interested in improving their current process.

Ultimately, estimation is a process, and, as Anderson explains, “There are two parts to learning the job. The first is the software application, and the second is the technical aspects.” Each vehicle has a different repair process, and may require a slightly different estimation process.

Montanez says that learning through good classes covers everything an estimator needs to know, but it doesn’t make a great estimator. “This isn’t learned overnight.”