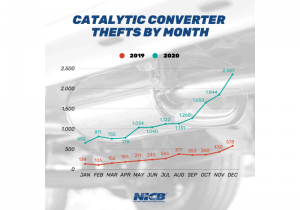 DES PLAINES, Illinois —According to the National Insurance Crime Bureau (NICB), catalytic converter thefts have seen a significant increase across the country since March of 2020, the start of the global pandemic.

“Vehicle thefts, carjackings, and break-ins are all crimes we’ve witnessed trending upward for several months, and now catalytic converter thefts are also on the rise,” said David Glawe, president and CEO of NICB. “We have seen a significant increase during the pandemic. It’s an opportunistic crime. As the value of the precious metals contained within the catalytic converters continues to increase, so do the number of thefts of these devices. There is a clear connection between times of crisis, limited resources, and disruption of the supply chain that drives investors towards these precious metals.”

A catalytic converter is designed to convert the environmentally hazardous exhaust emitted by an engine into less harmful gasses, using platinum, palladium, or rhodium. In recent years, the values of those precious metals have increased significantly. As of December 2020, rhodium was valued at $14,500 per ounce, palladium at $2,336 per ounce, and platinum going for $1,061 per ounce. Typically, recyclers will pay $50 to $250 per catalytic converter.

According to NICB’s Operations, Intelligence and Analytics study of reported thefts, there were 108 catalytic converter thefts per month on average in 2018, 282 average monthly thefts in 2019, and 1,203 average thefts per month in 2020.

During this time period, the top five states for catalytic converter thefts were California, Texas, Minnesota, North Carolina, and Illinois. In 2020, there was a continual climb in thefts. January had the fewest number of thefts at 652, but it continued to climb markedly throughout the year, with December having 2,347 thefts.

“Removing a catalytic converter takes only minutes using some basic, readily-available, battery-operated tools from a local hardware store,” added Glawe. “And for the vehicle owner, it’s costly due to the loss of work, finding and paying for alternate transportation and then paying anywhere from $1,000 to $3,000 to get your vehicle fixed.”