‘Cash for Clunkers’ Program Found to Be an Ineffective Economic Stimulus 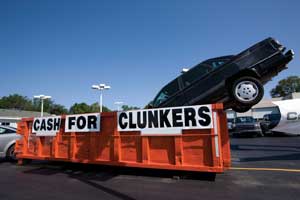 In 2009, the U.S. Congress passed the Consumer Assistance to Recycle and Save Act, and the president signed the bill June 24, 2009. As implemented by the U.S. Department of Transporta­tion, the program was labeled the Car Allowance Rebate System (CARS) Act. The program was more popularly known as the “Cash for Clunkers” Program. The legislation was supported by the administration and profiled by Princeton University economist Alan Blinder. Blinder offered the Cash for Clunkers program in a 2008 New York Times op-ed piece.

The CARS Act provided incentives of either $3,500 or $4,500 to help consumers purchase or lease a new vehicle from participating dealers when they trade in an older, less fuel-efficient vehicle. These less fuel-efficient vehicles were then permanently removed from the U.S. fleet. The National Highway Traffic Safety Adminis­tration (NHTSA) was required to administer the program within 30 days of the bill’s enactment.

ASA opposed the CARS Act suggesting that Congress had considered this issue on multiple occasions and wisely decided this was not good public policy. The Congress did come close to addressing a serious flaw in the proposal when then Sen. Tom Daschle (D-S.D.) offered for discussion the concept of a Cash for Clunkers program with a “repair option.”

Owners of high-polluting vehicles could receive repair assistance from the government to make their vehicle more environmentally friendly and keep their working vehicle. Assistance with repairing these vehicles offered the vehicle owner the opportunity to repair the vehicle and be able to use the vehicle as they have in the past. A repair option would help small businesses such as independent automotive repairers, car dealers, parts distributors, parts manufacturers and, yes, even automobile manufacturers that sell a lot of vehicle parts.

The lack of a repair option hurt lower income vehicle owners who found themselves pressed financially in the purchase of a new vehicle with limited federal funds from the sale of their older vehicle. Noted columnist George Will wrote, “Voucher recipients had lower incomes than others who bought new cars in 2009. Against this, however, must be weighed the fact that the mandated destruction of so many used vehicles probably caused prices for such vehicles to be higher than they otherwise would have been, meaning a redistribution of wealth adverse to low-income consumers.”

If economic stimulus were the goal of this program then stimulate the entire automotive industry. A repair option in a Cash for Clunker program would have done just that.

In 2010, then U.S. Transporta­tion Secretary Ray LaHood issued a press release stating that “Cash for Clunkers was wildly successful.” LaHood continued, “In a matter of weeks, Americans traded in nearly 700,000 gas-guzzlers for more fuel-efficient cars, improving the environment and providing a lifeline to the auto industry. Our program was a win for everyone, and most importantly it gave the economy a shot in the arm at a time when we desperately needed it.”

The study determined that 700,000 older cars were traded in between July 1 and Aug. 24, 2009, but that consumers just bought cars slightly earlier than they would have without the initiative. The study also states that cumulative purchases over the year were unchanged. Gayer and Parker write that pushing the vehicle sales boosted economic growth by $2 billion and created about 2,050 jobs, but that the program cost $1.4 million per job created – being less effective than other stimulus measures.

The study concluded that the U.S. vehicle fleet’s overall efficiency improved and carbon dioxide emissions were cut by 8.58 million to 28.3 million tons. Gayer and Parker suggested this was an inefficient way to reduce emissions because it costs between $91 and $301 per ton of carbon avoided.

Important for independent repairers is that the Brookings study determined: “In the event of a future economic recession, we would not recommend repeating the CARS program. While the program did accomplish both of its goals of stimulating the automobile market and decreasing carbon emissions, there are more cost effective policy proposals to achieve these objectives.”

Many Automotive Service Asso­ciation (ASA) members saw their businesses harmed by the Cash for Clunkers program. Customer vehicles that were repaired by an independent repair shop were traded, with the federal government subsidy, for a new vehicle under warranty. At this point in the recession, independent repairers were already impacted by a decline in repairs. The Cash for Clunkers program only worsened the economic crisis for some repair shops.

ASA has asked members to highlight the Brookings analysis for policymakers with a goal that these types of programs will not be implemented by the federal government in the future. To learn more about the Cash for Clunkers program, please go to www.Taking TheHill.com. In addition, members are encouraged to send a letter with information about the ineffectiveness of the program to members of Congress.