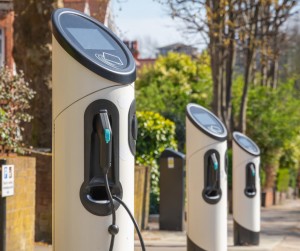 LONDON, June 2, 2021 /PRNewswire/ — Hundreds of billions of private dollars are being poured into the EV industry … and that’s on top of Biden’s $174 billion for subsidies and charging stations.

There is no stopping the surge.

General Motors is investing $27 billion in EVs over the next five years. It used the Superbowl for its breakout. Now, it’s mainstreaming them as the all-American car choice.

Ford is doubling its investment in EVs to $22 billion, and they’re planning to release their electric version of the Mustang and the F-150, the most popular vehicle in the U.S.

Amazon dumped $700 million into EV startup Rivian, and as of January, it’s managed to boost its funding haul to $8 billion.

United Airlines placed an incredible $1 billion order with EV manufacturer, Archer, for a fleet of electric air taxis. And Tesla’s recent earnings report blew the roof off the electric house, with car deliveries doubling in early 2021.

In a 12-month period …Blink Charging is up more than 1,509%…Chinese Nio has gained 657%…General Motors, whose stock couldn’t make a move at all prior to its EV push, has gained 94%.

Now, it’s time to look for the next EV tie-in play. And nothing fits that sentiment better than Canadian Facedrive (FD,FDVRF). The innovative pioneer of carbon offset ride-sharing has been acquiring companies and adding EV tie-in verticals at a rapid clip over the past year.

With these acquisitions, they’ve brought the EV boom into ride-sharing, food delivery and most stunningly, the emerging trend of car subscriptions. All this is partly why they’ve seen shares jump over 45% over the last year…And there’s likely much more to come here because this is a revenue growth story.

Over the last twelve months, Facedrive’s revenue grew by 552%. And now that Facedrive has announced a major government investment in their technology, we think their business could be set to take off in 2021.

Many of the biggest EV stories of late have come from auto giants unveiling new models or companies working on building out the infrastructure, like Blink Charging …But Facedrive–always an innovator–is taking a different approach.

Instead, they’re using the cars those automakers have already made and turning them into an EV-related ecosystem. Uber built its $96-billion business by leveraging cars that weren’t their own.

Facedrive (FD,FDVRF) is aiming to do the same. It’s connecting customers to EVs through ride-sharing, food and pharma delivery and via car subscriptions with its most recent acquisition of Exelon-backed, Washington, D.C.-based Steer.

Their ride-sharing model is simple. Customers request a ride and then pick conventional, hybrid or EV (at no extra charge). Facedrive’s algorithm crunches the numbers, setting aside a portion of the fare to plant trees, offsetting the carbon footprint from the ride.

Through next-gen tech and partnerships, they’re bringing EVs into the gig economy and leveraging them for revenues, without manufacturing a thing. That’s because Facedrive has also added a food delivery service, which has taken off since so many have been stuck at home during global lockdowns.

Today, they’re delivering over 4,100 orders per day on average. And after growing to 19 major cities, they plan to expand to more cities across the U.S. and Canada soon. But they’ve also gone beyond applying EVs to the gig economy and are offering a way for people to get behind the wheel themselves without the usual sticker shock.

EV demand is soaring and looks unstoppable. By mid-decade, it’s forecast we’ll have the choice of more than 400 EV models. Forecasts say this could push EV sales to between six million and 11 million vehicles by 2025, rising to between 11 million and 19 million units a year by 2030. With Facedrive’s acquisition of Steer, drivers can get the benefits without the large upfront cost.

Facedrive recently acquired the EV subscription company from the largest clean energy producer in the United States, and they’re aiming to change the way people think about using EVs. This is where Netflix meets the EV boom, for a double surprise that could turn traditional car ownership model on its head.

With Facedrive’s acquisition of Steer, customers pay a simple monthly fee like with Netflix, and they get access to their own virtual gallery of EVs, delivered on demand by concierge service. So they can borrow one whenever they need it instead of buying an EV outright – and at a fraction of the cost of buying.

They had been up and running in the Washington D.C. market already…And they’ve seen so much interest there that they’ve decided to expand further north, to roll out the service in Toronto as well.

Facedrive already has two of the largest metro areas in North America up and running, the eco-tech innovator is paving the way for a completely unique way to save drivers money in the EV boom.

Eco-Friendly and Working on the COVID Front Lines

While Facedrive (FD,FDVRF) has been busy helping bring EVs to mainstream use in creative ways, they’ve also been playing a role in the fight against COVID-19 in Canada. They’re helping people get back to work—more safely. Partnering with the University of Waterloo, they’ve created a wearable contact tracing technology called TraceSCAN.

It’s designed to help alert those without cell phones after they’ve been in contact with someone who’s tested positive for COVID-19. That’s great news for those working in schools, airports, mining, long-term care facilities, and more. And the demand for TraceSCAN has increased in recent months, as businesses work to open safely and responsibly.

Facedrive has now signed an agreement with Canada’s largest airline, Air Canada, to use this technology. They’re also in discussions to continue TraceSCAN’s growth with major multinational corporations. And the government of Ontario is investing $2.5 million to help speed up the deployment of TraceSCAN to more users.

That started the ball rolling in a major way, with Facedrive as a tech innovator pressuring other governments and businesses around the world to adopt measures to get people back to work safely and jump start economies.

2021 Is Where We Cement Our Electric Future

The EV boom isn’t just limited to manufacturing cars. It involves building an entire electric ecosystem and re-imagining what transportation looks like on all fronts. Facedrive (FD,FDVRF) fully expects to see its growth wave continue as it brings EVs to ridesharing, food delivery, and possibly the biggest disruptor yet–subscriptions.

General Motors (GM) is one of the world’s largest manufacturers, and they are now branching out into manufacturing electric cars. Though GM has been around for a long time, this new venture is an exciting step in their company’s history. They are working hard to create cars that are environmentally friendly and will offer drivers a better overall driving experience.

That’s not all its working on, either. In October, auto industry legend, GM announced that it’s majority-owned subsidiary, Cruise, has just received approval from the California DMV to test its autonomous vehicles without a driver. And while they’re not the first to receive such an approval, it’s still huge news for GM.

Ford (F)  is another legacy automaker that has committed to the electric vehicle boom. And while it suffered a major downturn last year, Ford is already bouncing back, with its stock price more than doubling since May 2020. Ford also announced that it plans on spending over $27 billion on electric vehicle production over the next decade.

Just two weeks ago, Ford finally revealed its new F-150. An electric version of one of the hottest selling cars in the United States. While Tesla’s still-to-be-released Cyber Truck boasts higher specs, the announcement of the iconic F-150 electric model has been very well received, and it has been reflected in Ford’s stock price.

Tesla Inc. (TSLA) is an American automotive and energy company based in Palo Alto, California. Founded by Elon Musk in 2003, the company specializes in electric cars, lithium-ion battery energy storage, solar panels and also sells its products online. Tesla’s first car was the Roadster sports car which became a reality when they began accepting orders for it on July 22nd 2008. The company has gone through many ups and downs over the years but recently they have been experiencing more success than ever before with their Model S sedan that received critical acclaim from both Consumer Reports as well as Motor Trend magazine who named it Car of the Year 2013.

Tesla was the talk of Wall Street in 2020. Throughout the year, the de facto king of electric vehicles dominated headlines and defied expectations. The meteoric rise by Tesla stock has seen CEO Elon Musk leapfrog several billionaires including Bill Gates to become the second-richest man on earth with a net worth of over $155 billion. Musk even briefly surpassed Jeff Bezos at one point to become the richest man in the world.

Blink Charging (BLNK) is an energy storage company with a focus on developing and deploying smart, flexible, cost-effective batteries to the grid. They are currently working on their first project in Southern California where they provide all-electric utility transportation services for the City of San Diego. Blink’s goal is to create a more sustainable world by providing clean, reliable power for everyone.

And it’s paying off. Blink has risen by over 1500% since this time last year. And the sky is the limit for this up-and-comer. A wave of new deals, including a collaboration with EnerSys to deploy electric vehicles and charging stations adds further support.

Nio Inc. (NIO) is a Chinese electric vehicle company that was founded in November 2016 by William Li, the CEO of Bitauto and founder of Beijing Automotive Group. In September 2018 they launched their first product, ES8 which is an all-electric SUV with a range of 480 kilometers (300 miles) on a single charge. And the year after, they finally went public. Nio’s debut on public markets wasn’t as exciting as many had hoped for, however. In fact, the company struggled to bat away short sellers and naysayers until 2020. But after reporting a record number of deliveries, launching its revolutionary “Battery-as-a-service” platform, and a multi-billion-dollar bump from Chinese investors, the company’s stock price skyrocketed by 1604%, starting off the year at $59 per share, before falling back to earth and settling at its current price of $42.10.