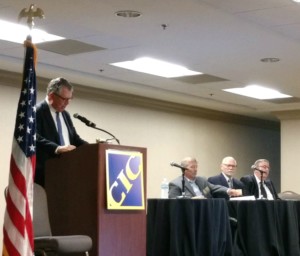 Redding moderated a panel entitled “A Closer Look at Most Favored Nation Clauses & More.” Redding has worked with state and federal policymakers advocating that these MFN clauses harm both collision repairers and consumers when included in DRP agreements.

In the context of collision repair, a Most Favored Nation (MFN) Clause requires a collision shop to guarantee an insurer will receive prices that are at least as favorable as those provided to other carriers doing business with the collision repair facility for the same products or services.

ASA Executive Director Ray Fisher said he was pleased to hear discussion about the issue from Stephen Bolerjack, who focuses his law practice on antitrust and trade regulation matters as well as business transactions and counseling in the automotive industry.

“I think it really identified the misuse of the clause as it is currently and the challenges it causes,” Fisher said. “My concern is that as the collision repair industry demands increase via ADAS or other systems, this unfair clause will eventually cause shortcuts that may eventually jeopardize safety through indirect pressure.”

Watch for more coming from Bob on this topic in the near future.