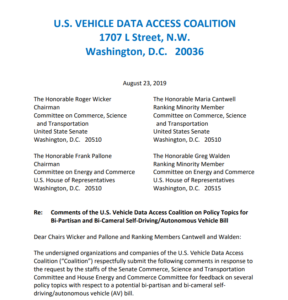 According to the letter, the Coalition was formed in 2017 “with a simple federal legislative goal – to reaffirm — and codify — a motor vehicle owner’s right to control the motor vehicle data generated by the vehicles owned by that individual or company. The Coalition started with a handful of stakeholders and has grown into a large and diverse stakeholder group representing consumer advocates, light- and heavy-duty motor vehicle fleet owners, insurance companies, technology companies and the motor vehicle aftermarket parts and repair industry. Together, Coalition members represent over 85 percent of the owners of motor vehicles in the United States – or approximately 224 million vehicles.”