From Ratchet and Wrench

Brent Wells is running a streamlined single-shop operation—but that suits him. 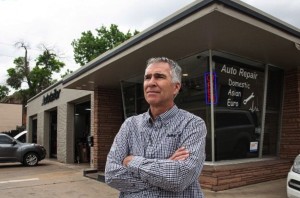 Ten years ago when his shop, Autotailor, was featured in the inaugural issue of Ratchet+Wrench, Wells was in the throes of a Denver expansion (his original shop is in Greeley, Colorado).

Not long after, he sold the new shop, Urban Auto Care, to friend and Avalon Motorsports owner Brian Sump, upon realizing that being a multi-shop owner didn’t jibe with his personality. “I’m just focusing on the one here in Greeley, and that fits me well. I’m enjoying what I’m doing,” Wells says.

Today, Autotailor is a three-bay shop with Wells and two full-time techs working on vehicles. He aims to remain conservative with the shop’s financials, making it a point to stay out of debt and keep a cash-positive position—even on equipment purchases.

“I think about being able to have a small shop, getting it dialed in, making a decent income, and building net worth and worrying about efficiency rather than big shop, big volume,” Wells says, adding he’s not had a sleepless night in 28 years regarding Autotailor’s financial position.

“It’s really allowed us to focus on the business and the customer and running the shop the way we believe it should be.”

Wells has focused on specialty work at Autotailor in recent years, which has boosted his average repair order.

“BMW and Mini Cooper have been a specialty for us and have worked well. And obviously that brings in more European work. We still do all makes, but that BMW focus has definitely been a good thing for us,” he says.

In the past decade, technology has changed the ways shops have run. Wells says there have been mixed feelings at Autotailor regarding technology, and though his shop is paperless and uses tech platforms, his preference is still good old-fashioned hard copies.

“There are positives, but they can almost be a negative because I think it’s easy for technicians, service advisors, and everybody to kind of forget the basics: communication with the customer and the basics of the vehicle. We tend to look at the vehicle and assume it’s a high-tech issue when it may be a simple fix that we overlook and over diagnosed. I do think that there are some negatives with the technology that may have disconnected us from the customer and the basics,” he says.

Despite running a small shop with a couple of crew members, Wells is cognizant of the challenges facing the auto industry regarding labor and technician shortages. It’s something he keeps in front of his mind but is grateful for the longevity he’s seen within Autotailor.

“We have been fortunate for the last 28 years in keeping technicians pretty long term. Over those years, we’ve had a technician here for 21 years, one for 10, and one for eight. We currently have a great staff, what we consider the dream team, and we’re fortunate for that. But it’s about knowing who you are and being consistent. It’s more than hiring a body. If you are just hiring a tech to knock the workout and you can’t sell the vision, I think it’s hard to keep staffed and not have people come and go,” Wells says.

Preparing for a New Decade of Change

In March, Wells closed his shop for three days and took his staff to train at WorldPac STX 2022 in Orlando, Florida. His staff focused on BMW, Audi, and other European car training while Wells dove into electric vehicle training. He says the future is exciting, and he’s preparing for what’s next.

“We know we’re not going to be working much on those in the near future, but we always want to look ahead and plan for that transition. We’ve been working on hybrids for 20 years. Before we ever started working on them, we were training on them. As far as the technology part of it, I think we’ll adapt to that like you always do because five to 10 years comes by pretty quick and they’ll be part of our routine daily mix,” he says.

As Wells looks forward to the coming decade, he’s approaching it with optimism. His focus is on expansion over acquisition, building relationships with customers and improving the communication the shop has with them, and scaling the shop to keep it profitable and growing.

“We are currently looking at doing an expansion and adding a couple of additional bays and additional office space. We’ve planned to improve the look of the building. The intent is to stay at this location. I don’t see multiple locations. I don’t think that’s me. We’ll stay focused on who we are and giving the customer a great experience,” says Wells.

From Ratchet and Wrench