Desi Mawi, right, proudly holds the U.S. flag with her dad, Bawi Lio. Mawi’s dad became a U.S. citizen yesterday in Fort Worth, Texas. The flag was flown over the U.S. Capitol and presented to Mawi and her dad by Robert L. Redding Jr., ASA’s Washington, D.C., representative, via conference call.

NORTH RICHLAND HILLS, TEXAS – They say timing is everything, and we couldn’t agree more!

Yesterday, Desi Mawi, a part-time membership/accounting assistant in ASA’s national office, stopped by the ASA Office to introduce her family to the ASA team at the request of Ray Fisher, ASA executive director. Fisher heard that Mawi’s dad became a U.S. citizen yesterday during a naturalization ceremony in Fort Worth, Texas.

As you may recall, Mawi got her U.S. citizenship back in April. You can read the FULL STORY HERE.

Fisher invited Mawi to stop by the office so the team could meet her family and congratulate her dad. She thought it was going to be a simple introduction and they would pop in and out.

But Fisher had other plans.

Fisher invited Mawi and her family to join the ASA staff gathered in the conference room.

At the same time, he teleconferenced in two other participants: Robert L. Redding Jr., ASA’s Washington, D.C., representative, and Bob Wills, ASA chairman, based in Michigan.

After a brief introduction, Redding surprised Mawi with a presentation of the U.S. flag, which had flown over the U.S. Capitol. Redding had requested the flag earlier this spring after he saw a story about Mawi’s citizenship in AutoInc.org. The flag arrived in the mail this week, just a few days before Mawi’s dad became a citizen himself.

Fisher thought it would be neat to bring it all together by coordinating an impromptu ceremony to present Mawi with the flag.

While Redding shared his prepared statement via teleconference, Mawi opened the brown parcel containing the flag. Her family watched with excitement and anticipation.

Said Redding, “Congratulations to you, Desi, and also your Dad on your U.S. citizenship! … This flag was flown in your honor at the request of United States Congresswoman Kay Granger of Texas who is the Ranking Member of the U.S. House of Representatives Committee on Appropriations and a former Mayor of Fort Worth, Texas.”

Mawi was “blown away” by such a thoughtful and meaningful gesture.

“It was such a happy day for our family,” said Mawi.“I want to especially thank our Washington, D.C., lobbyist, Bob Redding, for coming up with the idea and our ASA Chairman Bob Wills for allowing it to happen. I also want to thank Executive Director Ray Fisher for his generosity on all of this.”

The day was special for Fisher, too.

“It was a magical moment to be able to share in their liberty, and I am thankful that she allowed us to enjoy it with her,” said Fisher. “Thank you to our staff and Desi’s team lead, Stephanie Torres, for going out on her own and getting some ‘patriotic cupcakes’ for this moment!” 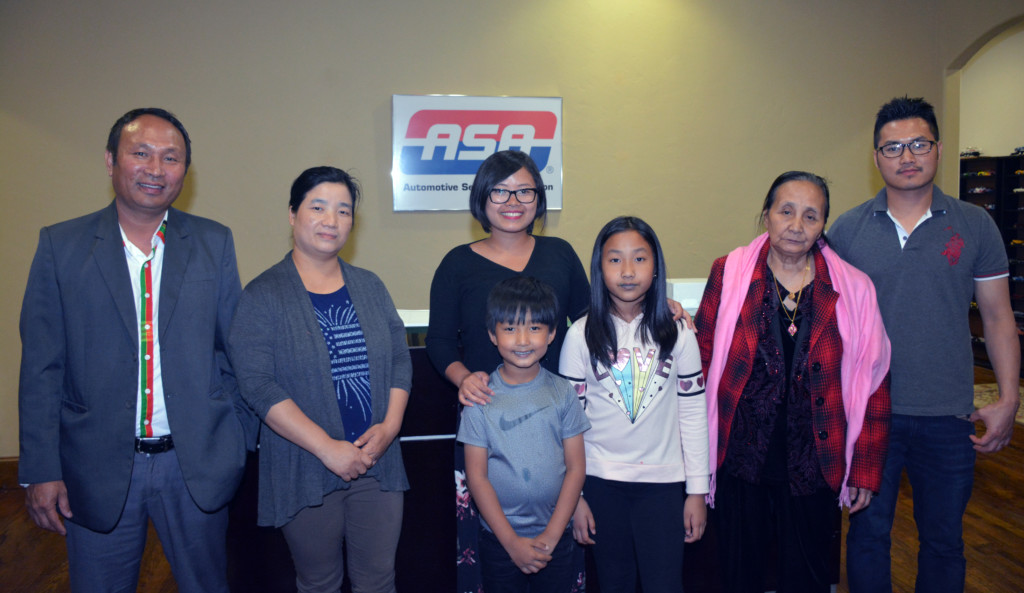 Desi Mawi, center, is surrounded by her family who got to see her receive a U.S. flag flown in her honor. The festivities took place June 13 at the ASA National Office in North Richland Hills, Texas.

June 14 is Flag Day in the United States, which commemorates the adoption of the U.S. flag on June 14, 1777, by a resolution of the Second Continental Congress.

Thanks to Redding’s special request and Fisher’s planning, this day will be full of lasting memories for these two new citizens and their family.

As Mawi reflects on her first Flag Day as a U.S. citizen, she is thoughtful about what the flag represents to her – both as an immigrant and as a new citizen: “A girl like me had a very little chance in life if I were in my home country [of Myanmar] where poverty never ends and the longest civil war is still going on …

“This country has given me a lot more opportunities than what I deserve. I got to finish high school, and now I’m also close to finishing at my university. My future goal is to travel more and to be able to help more people in any way I can. I am so grateful and thank the United States for giving me a second chance in life. I love you, ASA, and I am forever grateful to you and may God bless you.” 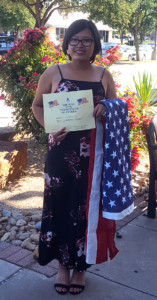 To celebrate her first Flag Day as a U.S. citizen, Desi Mawi displays the U.S. flag flown in her honor over Capitol Hill, along with a certificate.

This is the prepared statement that Robert L. Redding Jr., ASA’s Washington, D.C., representative read via conference call in presenting a Capitol Flag to Desi and her Dad:

Congratulations to you Desi and also your Dad on your U.S. citizenship! What an honor!

In 1937, a Member of Congress requested that a flag be flown over the U.S. Capitol, which started the Capitol Flag Program we have today. Flags are flown to recognize holidays, honor veterans, those lost in battle, awards for civil service, and other special occasions.   These flags are flown above the U.S. Capitol when the sun rises every morning.

This flag was flown in your honor at the request of United States Congresswoman Kay Granger of Texas who is the Ranking Member of the U.S. House of Representatives Committee on Appropriations and a former Mayor of Fort Worth, Texas.

The American flag is a representation of liberty, freedom, and unity among all of the 50 states, and this flag today is a wonderful tribute to your achieving your United States citizenship. As your ASA family, we are so very proud for you. Congratulations.