Attends Its Second White House Meeting to Discuss the Issues. 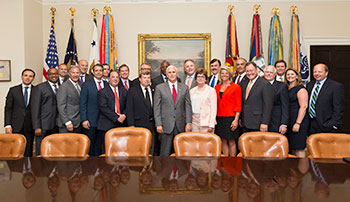 Congressional leaders and the administration are working diligently to bring much needed federal tax reform to the small business community. A small team of House and Senate leaders and White House officials that included Gary Cohn, director of the National Economic Council (NEC), have been meeting for months on these important issues.

Automotive Service Association (ASA) board member and Mechanical Operations Committee Director Bob Wills and I met with Cohn and the NEC team to discuss issues as part of an automotive industry tax reform meeting at the White House. Vice President Mike Pence joined the meeting.

“I am also encouraged by the president’s excellent remarks on tax reform. He explained clearly today why Washington must act now on pro-growth tax reform that will create jobs, grow paychecks and improve the lives of all Americans. As the president mentioned, our tax reform plan will make the American Dream more accessible than ever before. The Ways and Means Committee is ready to work with the president and deliver on this important priority this year.”

“In 1984, President Reagan called for a reform of the tax code. He laid out three main goals for tax reform: Fairness, efficiency and simplicity. Those three goals are as relevant today as they were a generation ago. For our current efforts, I would add a fourth goal: American competitiveness. This goal is essential in today’s global economy, as we must also consider what is happening outside our borders. When discussing tax policy or legislation, it’s very easy to find oneself heading down Byzantine paths of ever-greater complexity, but I think we would do well to keep focused, and to frequently remind ourselves of these basic principles. Therefore, I’ll repeat them: Fairness, efficiency, simplicity and American competitiveness. The Tax Reform Act of 1986 is generally considered to be a great success.”

“For the first time in many years, the American people have elected a president and Congress that are fully committed to ensuring that ordinary Americans keep more of their hard-earned money and that our tax policies encourage employers to invest, hire and grow. And under the leadership of President Trump, the White House and Treasury [Department] have met with over 200 members of the House and Senate and hundreds of grassroots and business groups to talk and listen to ideas about tax reform.

“We are all united in the belief that the single most important action we can take to grow our economy and help the middle class get ahead is to fix our broken tax code for families, small business and American job creators competing at home and around the globe. Our shared commitment to fixing America’s broken tax code represents a once-in-a-generation opportunity, and so for three months we have been meeting regularly to develop a shared template for tax reform.”

In a subsequent meeting with White House officials, ASA again highlighted the top issues (outlined below) to be included in any final tax reform package: addressing the inequities of how the IRS treats pass-through entities, the importance of lowering taxes and the permanent repeal of estate taxes.

Many of our auto repair facilities, large and small, are organized as a sole proprietorship, partnership, Limited Liability Company (LLC) or S-Corporation. These pass-through entities pay taxes on business income as individual tax rates – as high as 39.6 percent – and not at the corporate tax rate – currently as high as 35 percent.

Our businesses should not have to pay a higher tax rate than businesses organized as C-Corporations. Any tax reform initiative should take into account how small businesses are organized today. Automotive repair shops’ structures are similar to other members of the small business community.

New vehicle technologies, i.e. vehicle-to vehicle, vehicle-to-infrastructure and autonomous vehicles require our members to purchase new equipment/software and pay for many hours of training for our technicians. This all comes out of the bottom line.
Lower tax rates will allow us to recapture some of those expenditures that already are occurring as auto repair shops adjust to new vehicle technologies.