Fisher responds to questions from the media, looks to future

NORTH RICHLAND HILLS, TEXAS – New ASA Executive Director Ray Fisher told reporters last week that he’s excited about the association’s future and that he has no plans to look back.

“I like to look at the windshield not the rearview mirror,” Fisher said during a nearly half-hour online news conference.

Fisher officially took over as ASA’s leader on Jan. 2. He recently served as ASA-Michigan’s executive director.

During the news conference, Fisher addressed: 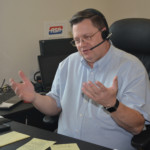 CLICK HERE to watch the news conference in its entirety.