– Used-vehicle demand remains relatively strong, despite being down from abnormally strong June 2018.

ATLANTA, July 8, 2019 /PRNewswire/ — Wholesale used-vehicle prices (on a mix-, mileage-, and seasonally adjusted basis) increased 0.61% month-over-month in June. This brought the Manheim Used Vehicle Value Index to 140.5, a 4.1% increase from a year ago.

After seeing steady and slightly lower than normal depreciation in weekly Manheim Market Report (MMR) prices in May, prices remained firm or slightly higher each week in June. Three-year-old vehicle values in aggregate saw an increase of 0.4% for the month, which was slightly stronger than last year’s performance. Prices in aggregate remain lower than at the beginning of the year, but non-luxury prices remain higher. Luxury vehicle prices, which had seen abnormally high depreciation this year through May, also saw slight price appreciation in June.

“From a retail sales perspective, the used car market continues to outperform the new market,” said Jonathan Smoke, chief economist for Cox Automotive, parent company of Manheim. “While we are past the busiest time of the year, a strong used market has continued into summer due in large part to the record number of late-model off-lease vehicles available that provide an affordable alternative to expensive new vehicles. Used vehicle price movement in June indicates that demand for ‘gently used’ vehicles exceed supply.” 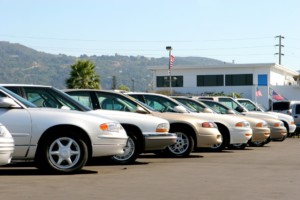 According to Cox Automotive estimates, used-vehicle sales volume was down 3.0% year-over-year in June. We estimate the seasonally adjusted annual rate (SAAR) in June was 39.8 million, down from a sales pace of 41.1 million last June but up from May’s 39.2 million pace. Last year is a tough comparison for the month as the used-vehicle market experienced an abnormal increase in consumer demand during the summer driven by tariff fears and rising interest rates.

Similar to the used-vehicle market, the new-vehicle market was soft in June. New-vehicle sales volume in June was down 2% year-over-year, with one less selling day compared to June 2018. The June SAAR came in at 17.3 million, improving versus last year’s 17.2 million but down slightly from May’s 17.4 million rate. Cars continue to see declines, as sales in June fell 8% compared to last year. Light trucks outperformed the market in June, finishing the month up 1% year-over-year.

Combined rental, commercial and government purchases of new vehicles were up 5% year-over-year in June, but down 11% month-over-month. Fleet sales have been strong throughout the first half of 2019, as the market is on course to deliver the highest volume of fleet sales in history. The rental fleet channel was up 11% year-over-year in June. Retail sales of new vehicles, on the other hand, were down 3% in June, leading to a retail SAAR of 14.1 million, down from 14.3 million last June.

New-vehicle inventories came in under 4 million units for the second consecutive month.

The final estimate of first-quarter real GDP growth came in at 3.1%, which was unchanged from the second estimate. Second-quarter growth will show a substantial decline as the U.S. economy is challenged by declining global growth and weakening business investment, but consumer spending appears to be holding up relatively well. Personal spending grew 0.4% in May, and April’s growth of 0.3% was revised up to 0.6%. Consumer confidence declined substantially in June as consumers reported significant declines in views of present conditions as well as future expectations. The extent of decline matched the decline in December in the midst of a government shutdown and stock market selloff. Consumer confidence is now lower than last year and at a 21-month low.

Download additional commentary and the Q2 call presentation from the Cox Automotive Newsroom.